To the Ageless One, Prof Chinyere Okunna

She was my teacher at the Institute of Management and Technology, IMT, Enugu, before I crossed over to the University of Port Harcourt. That was many years ago but even then I have always marveled at how very much the same she looks and that is why I always call her the Ageless Prof.

Okunna is a mother figure to many journalists in Anambra State. She recently celebrated her birthday shortly after the Nigeria Union of Journalists, Anambra State Council, gave her an award of the Matriarch of the Council. This award was occasioned by her commitment to the progress of the Council and its members.

She attends most of the Council’s functions, even those you would ordinarily not expect her to attend. She is very much loved, respected and adored by all of us and God save anyone who dares her.

I recall an incident in one social media forum where one man who probably did not know her well, tried to ridicule her when it was mooted then that she had been picked as running mate to Val Ozigbo ahead of the last governorship election in Anambra State.

Immediately that man tried to ridicule her choice, the journalists in the forum nearly tore him to shreds. I’m sure he must have wondered the kind of woman Okunna was to have made those members to descend on him. Such is an example of the love her boys and girls have for her.

As she celebrates her birthday, I join her legion of sons and daughters in the journalism profession to wish her a happy birthday and to pray that her remaining days will be spent very gracefully. 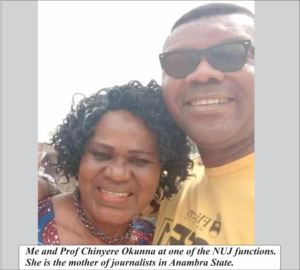 One of them, Mr Chuks Iloegbunam, said, ‘After all, shoes come in sizes. You cannot have Chief Magistrates displaying the effrontery and temerity of taking up seats in conventions of Supreme Court Justices.

‘The rules of engagement must, in the preparatory stages, be spelt out and agreed between debating candidates and debate organisers.

This will, for instance, eliminate the contingency of bias and prejudice on the part of the moderators.

Rules of engagement read just before the commencement of political debates are essentially for the benefit of the audience. It’s just like in soccer where the referee, the linesmen, the coaches and the players, even the spectators, know the rules well before the first blast of the referee’s whistle heralds the start of “hostilities” around the inflated leather.

‘Debate organisers must guarantee in writing that the sort of irresponsibility displayed by the Melaye fellow and other rapscallions would be beyond toleration and also possibly actionable.

‘To sum up, if Mr. Peter Obi attends a presidential debate in which only a candidate of one of the lesser known parties is his diologist, it is to his advantage because he will effortlessly carry the day, earn free and encompassing publicity, and better the scenarios in which he has been running the seemingly endless relays of radio and TV stations.

‘I thought these points should be presented for consideration.’

Mr Iloegbunam was reacting to the attempt by one Dino Melaye to get under Obi’s skin by riling him during the recent Arise Television Town Hall Meeting for presidential candidates of parties ahead of next year’s presidential election. Melaye’s taunt had really got Obi angry and he let Melaye know his mind. It was a rare occasion where the usually placid Obi had lost his cool.

But that had elicited sundry reactions from people and chief of the reactions is that Obi should minimize his appearances at such debates where the other major candidates will not come. I align myself with this.

It is crystal clear at this moment that the duo of Atiku Abubakar and Bola Tinubu, especially Tinubu, are afraid of speaking to the people. When the Nigerian Bar Association invited the candidates to come address them, Obi was the only major one that came. Atiku was missing while Tinubu sent his running mate, Shettima, to represent him.

There had also been another occasion before the Arise TV show when only Obi appeared. On the Arise programme, Atiku had sent his running mate, Ifeanyi Okowa, to represent him, while Tinubu sent no one.

This had incensed the crowd at the place who shouted that the debate was only for presidential candidates. They were later placated into cooling down and the programme started behind schedule.

I am therefore constrained to ask: why are Tinubu and Atiku avoiding talking to Nigerians? What are they afraid of? Does this mean they will not attend any debate, including the presidential debate, when it comes up? Recall that President Muhammadu Buhari shunned the last presidential debate which would have afforded Nigerians the opportunity of assessing his mental capacity.

Well, what happened is history but suffice it to say that today, Nigerians have seen the mental capacity of Buhari but only too late.

Now, Tinubu and Atiku are toeing same path. What are they trying to hide from the public? I hope Nigerians are watching and taking note so that they won’t repeat the 2019 mistake.