Tinubu and His Bishops

Nigeria is a country of strange happenings. Just when you think you have seen it all, some other fresh thing confronts you and you shudder. The country was recently dragged into a new low by the party ruling in the centre, the All Progressives Congress, APC, when they paid money to all manner of people and gave them robes to impersonate Christian bishops.

Those so bribed included artisans, motor park touts and even Muslims. After the show of shame, some of them were filmed sharing their money in some parts of Abuja. But it was something that hugely betrayed their ignorance of how bishops dress as one of them was even wearing the robe of a catechist while posing as a bishop! But trust Nigerians.

After the saga, many began to make a mockery of APC by producing many Tik Tok videos of people wearing all manner of apparels and posing as bishops. This made many people to have a good laugh; something that is coming at a high premium these days in a country where happiness barely exists.

That action of the APC to flood the venue of the introduction of Bola Ahmed Tinubu’s running mate, Shettima, was one that many Christians viewed as an insult to them. They wondered what would have happened if Christians had produced fake Muslim Imams to paint a picture that they are supporting a double ticket of Christians.

This train of thought cannot be faulted since it is coming not long after Moslems killed and burnt a female Christian student in Sokoto, Miss Deborah, for ”insulting Allah” which Nigerian Moslems view seriously.

But now, Christianity has been insulted in Nigeria by the importation of all manner people to pose as bishops supporting a Moslem-Moslem ticket. I have not heard any Christian chasing any Muslim with machetes or bows and arrows, apart from condemning the action of the APC. Yet, Nigerian Christians have often been killed over what transpired in other countries! This tolerance by Nigerian Christians is however how it ought to be among civilized people, no matter the level of provocation.

But beyond this, one just wonders why Tinubu should okay that show of shame just to appear to enjoy the support of Christian clergy after he had manifestly shown that he did not consider Christians important by choosing a fellow Muslim as his presidential running mate. It did not matter to him that no known bishop was among those billed to be brought to the venue of the presentation of his running mate. 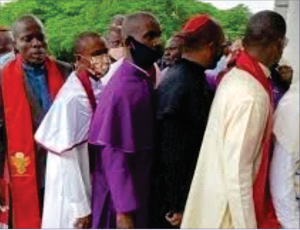 But why would it matter to him when some people are still ready to go with APC in the coming general elections? These are people who have lost their loved ones to the continued and unchecked activities of bandits in parts of Nigeria.

They are those whose children have been out of school for months now because the present government of APC has refused to give university lecturers what they deserve, while wasting money on the purchase of their party’s presidential nomination form. These are people who can barely afford decent meals occasioned by the inept and corrupt leadership of the APC government at the centre. But just because of a promise of a few wads of the Naira note, they are ready to sell their present and future.

Indeed, if it were in a sane country the APC government would have since resigned in shame or been voted out after their first tenure. But this is Nigeria where it is anathema for public officers to resign even after found to be fantastically corrupt.

Let’s even look at the actions of our Igbo brothers in APC during the party’s primary. Despite knowing that their zone ought to produce the next president, they gleefully and shamelessly betrayed their brothers and went for filthy lucre.

Indeed, is there anything we have not heard from this APC government? Most of the tales sound bizarre but mostly turn out to be true. It is to the extent that Nigerians have ceased feeling shocked. But we never thought they would go to the extent of bribing people to pose as bishops. Is there no limit to their tomfoolery?

Pray, what is Tinubu looking for in Aso Rock?

The other day I saw a picture of Tinubu, the APC presidential candidate, being ushered into an event. He looked like someone on the verge of collapsing any minute. Look, no one insults old age. It is a privilege to attain old age and old people should always be respected. I, for one, have always respected my seniors; not to talk of old people. But then, old people are expected to also respect themselves by conducting themselves with decorum.

After many years that some people have mismanaged the affairs of Nigeria and thrown us into the abyss in which we have currently found ourselves, one expects that such people should vacate the space for younger people. But in Nigeria, those same people have hung on to power and even when they are obviously dying, just as we see in many African countries, they will still cling on to power or aspire to do so.

As Nigeria gears up for the 2023 presidential elections, Nigerian voters are faced with three choices: two old men and one younger man. The two old men represented by Tinubu and Atiku Abubakar, have been around the scene for long and have been active participants in what many believe to be the looting of the resources of the country but they have refused to quit the scene because they feel it is their right to own Nigeria. Thus, even when they are tottering in their steps, they still want to be given the key to Aso Rock.

When I therefore saw Tinubu walking as if he was going to fall or collapse any moment I wondered what he is going to Aso Rock to see or get. This man is so obviously sick to the extent that we may have another case of Yar’Adua in our hands.

Yes, no one is God who knows when the end will come for any man. It is also a fact that many younger people will die before Tinubu. But then, the things we see as humans do not bode well for Tinubu and anyone who loves him should be advising him to take it easy at this stage and relax to enjoy the fruits of his earlier labour.

Nigeria is one hell of a country for any normal person to manage, let alone a frail person, but Tinubu is angling to manage Nigeria when he should be retiring to an old people’s home. His antic of bringing fake bishops to witness the unveiling of his running mate looks like a product of warped thinking which can come with old age.

I say this because it was inconceivable that a right thinking person would consider inviting fake bishops when he knows that people will find out. How on earth did they think that they could hoodwink Nigerians when no known bishop was among those parading as bishops? That they could even think of doing that and actually doing so deserves a huge apology to not just the Christian body in the country, but to all Nigerians of good conscience.

I think God is using all these ”signs and wonders” to show Nigerians the kind of person and people aspiring to rule their country, especially when the country is peopled by those who believe in signs and wonders. It is a wonder for Tinubu to believe no one would discover the fraud called the invitation of fake bishops.

It is a wonder because it is unimaginable that anyone can do that. I’m sure that up to now, the Tinubu Camp may still be covering themselves in shame as a result of the fake bishops’ saga. Such a deceit would have compelled them to resign in civilized countries.

The APC has brought untold hardship to Nigerians in ways no past regime had done. The government of APC has wasted too much blood to the extent that the land is saturated with the blood of the innocent. Their government has been the most clueless too and while the nation burns they are still beating the drums of merriment.

But the 2023 presidential election offers us the last chance to save Nigeria, even if Tibubu goes to import bishops from Daura.