If there was one thing the governor of Anambra State, Prof Chukwuma Soludo, seems most desirous of achieving, it is to restore the tag of Anambra as the state with the best road network as was the case some eight years ago. This was why among the first few things Soludo did on assuming office was to award several road contracts across the state where work is now in full progress. That was a very commendable thing to do, given the massive collapse of roads across the state.

From the state with the best road network, Anambra turned very quickly to one with the worst. It was such that even the capital city which should have had a better deal was neglected, making it one of the worst state capitals in the country. But with the massive award of road contracts across the state by the present government, all this is about to change, hopefully.

But going by past experiences, work on these roads may stall due to one thing or the other, despite the governor giving terminal dates for their construction. Such delays may lead to the pausing of work once the rains set in, which, in turn, will lead to the usual excuse of waiting for the rains to end. We do not want this to be the case, as any further delay will see the people of the state experiencing the worst kind of suffering. 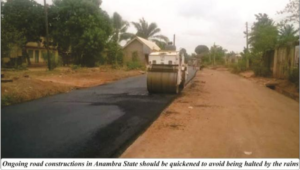 There is no doubting the fact that much of the criminality in the state is due to the bad state of the roads as the hoodlums usually target their victims at bad portions of roads. This is why all the ongoing road constructions should be quickened in order to meet the deadlines set by the state government before the rains return.

We are also hoping that the governor’s assurances that the roads being built will last for twenty years will be actualized, so that funds will not be used on reconstructing and re-awarding contracts for roads every now and then. Contractors must equally abide by the specifications given by the government who should in turn adopt adequate monitoring measures to ensure compliance.

Good roads not only add to the beauty of a city or community but also make life comfortable for the citizens. Roads bring development as they open up hitherto inaccessible areas.

Finally, we urge the government to reactivate the Anambra Road Maintenance Agency, ARMA, in order for the agency to quickly carry out palliative work on any portion of the road that collapses. This will lessen the headache of the state government as most times, dilapidating portions of roads are allowed to collapse before being tackled. The mistakes of the recent past should not be allowed to be repeated this time around so that government can use its scarce resources in addressing other areas of need in the state.