Time to Rethink The NYSC Scheme

To don the famous khaki of the National Youth Service Corps used to be a thing of great pride. But it appears that is no longer the case with events that have unfolded in the country since the scheme was established in 1973.

In 1973, the Scheme was created as an avenue for reconciliation, reconstruction and rebuilding of the country after the Nigerian Civil War. It was established based on Decree No. 24 that stated that the Scheme was created ‘with a view to the proper encouragement and development of common ties among the youths of Nigeria and the promotion of national unity.’

The promotion of national unity which had always been emphasised, became especially important following Nigeria’s horrifically internecine Civil War which turned the country upside down between July 6,1967 and January 15,1970, and perhaps forever, leaving a country perpetually broken. 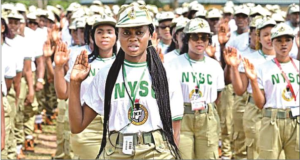 When General Yakubu Gowon, the then military head of state, floated the Scheme in an attempt to hasten the healing of national wounds, many perceived that it was a sop to the ghosts of the Civil War, or worse still, salve for a conscience savaged by the haunting cries of the children who agonizingly breathed their last as two misguided military officers led Nigeria down a most perilous path.

If the NYSC was exciting in the beginning for the structured way and manner it enabled Nigerian graduates to take in  the breathtaking diversity of their country while serving some of Nigeria’s most vulnerable communities, the gruel has since soured, leaving a bitter taste of disillusionment, disappointment, disenchantment and even death.

A scheme of death?

On Sunday, June 19,2022 about four corpses were found floating on  the river close to Otuan and Ayama communities of the Southern Ijaw Local Government Council of Bayelsa State. One of the corpses was of  a female member of the National Youth Service Corps. The boat accident was reportedly caused by bad weather, poor visibility and lack of life jackets for passengers.

On June 1, 2021, Faith Onoriode, a female member of the National Youth Service Corps was released by bandits who had kidnapped her on March 21, 2022 on the Abuja-Kaduna road. Miss Faith Onoriode, a Biology/Microbiology graduate of the Delta State Polytechnic, Otefe, Oghara, who was posted to the orientation camp in Jigawa State was only released after the family reportedly paid N2 million naira in ransom, accompanied with a motorbike, five Tecno phones and N100,000 worth of  recharge card.

Perhaps, it makes some dark sense in Nigeria’s atmosphere of insecurity that corps members should be imperiled too. However, the question remains to what extent they will be imperiled if they do not have to travel to some of Nigeria’s most volatile states to serve their country under the Scheme?

Corps members who used to be spared the horror of attacks have now become routine targets as Nigeria continues its ugly descent into the doldrums of insecurity.

It would appear that in the face of Nigeria’s increasing insecurity and the preference of many of those who form the crop the country’s leadership to tout ethnicity over unity, the Scheme has lost its allure.

As travel across the country has become fraught with risk; many graduates deployed for the scheme actually try to work around the scheme’s increasingly corrupt placement system to get favourable postings, or travel only at great risk to their lives.

Some of the scheme’s orientation camps in the increasingly volatile Northeast have also remained shut for years.

Bearing these ugly developments in mind, it would appear that in spite of its many promises, and the many pearls it has thrown Nigeria’s way for forty-nine years, the scheme should finally be put out to pasture.

With the 2023 elections looming, and with the Independent National   Electoral Commission more likely than not to deploy corps members as adhoc staff, it would seem that in Nigeria, there is hardly anything that can be guaranteed these days, including the safety of corps members serving in various parts of the country.