If there is any time for Nigerian Christians to make their stand known on their choice of who becomes the president of Nigeria in 2023, that time is now. The recent ridiculing of Christianity by the ruling All Progressives Congress, APC, by manufacturing fake bishops to stimulate support for the double Muslim ticket by that party should be to clearly tell Christians in Nigeria that they do not matter.

At the unveiling of Shettima as the running mate of APC’s presidential candidate, Alhaji Bola Ahmed Tinubu, all manner of charlatan were picked from the streets and given robes to pose as bishops in a bid to paint a picture of Christians endorsing the Muslim-Muslim ticket of APC.

That the APC candidate went to the extent of importing fake bishops to his function is enough sign of the fate that will further befall Christians in Nigeria if that party is allowed to remain in the saddle for another four or eight years. Already, the party’s over seven years in power have seen the worst kind of marginalization of Christians in appointments to key positions while the killing of Christians has been unprecedented.

Worse still, Christian clerics are now prime targets, with the Catholic Church alone having four priests killed after they were kidnapped. In all of this, the Muslim dominated federal government has done nothing and cared less about the fate of Christians. And now the APC has gone further to endorse a Muslim-Muslim ticket for next year’s presidential election in a country deeply immersed in religious politics. 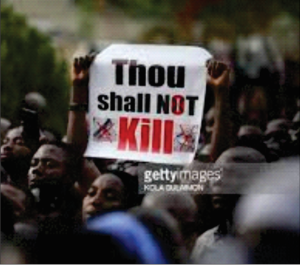 Given the present scenario and experiences in the last seven years, it will be really foolhardy for Christians not to begin to make plans to ensure that their painful experiences during this period are not repeated. This can only be done by Christians now coming all out to mobilize support for their own.

Good enough, of the three major presidential candidates, Christians have one solid candidate in Mr Peter Obi who is seen by the majority of Nigerians and non-Nigerians as the best of the lot. If this is the case, why should all Christians not rise in support of that man?

While it is true that Christians are supporting him, they should take that support to next level by actively drumming support for him in churches and compelling every one of their members to vote for the man. This election is no longer about party but about the survival of the country and the survival of Christianity. The time for sitting on the fence is gone.

Supporting a Christian to replace the outgoing president should be seen as part of evangelism if possible since the Christian faith is facing an existential threat. It is made easier by the fact that the Christian candidate is not just anybody but somebody who has proved himself in office as a good manager of resources and as one that can be trusted.

There is therefore no reason why support for him should be hushed. It should be proclaimed from the pulpits as loudly as possible so that those who have ears will hear and act.

Nigerian Christians, the time to take a stand is now.