Those behind Anambra Attacks are against Kanu’s Release – IPOB

A group, Coalition of South East Youth Leaders, COSEYL, has accused some elements in the Indigenous People of Biafra, IPOB, of responsibility for attacks in Anambra State.

The group, in a press statement signed by its president general, Mr Goodluck Ibem, said the elements were opposed to the release of Nnamdi Kanu because of the money they were making as a result of Kanu’s absence.

Ibem said the group chose Anambra for the latest attacks because Governor Chukwuma Soludo was working hard for the release of Nnamdi Kanu and the elements felt the attacks would force the governor to abandon the efforts.

The release by COSEYL read: “The gunmen burning government property in Anambra, are doing so because they are not happy with Soludo’s move to secure Nnamdi Kanu’s release.” 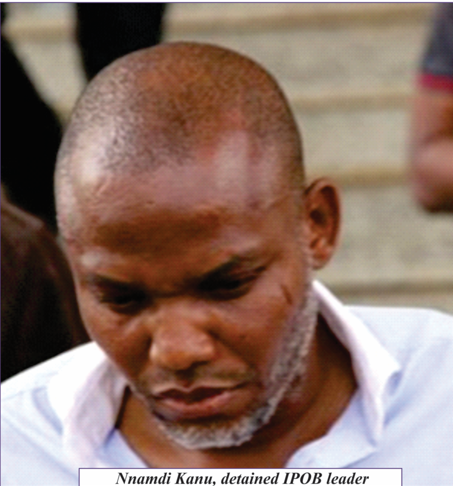 The group, an umbrella body of all the youth groups in the South East Geopolitical Zone, said after a careful study and analysis of the burning and destruction of local government council secretariats in Anambra State, unprovoked attacks on innocent people by gunmen and targeted attack on the residence of Professor Soludo, it had confirmed that they were after the governor.

They attributed it to the move by Soludo to mobilize South East governors and other Igbo leaders to negotiate for the release of Nnamdi Kanu who is currently in DSS custody in Abuja.

Governor Soludo, after his swearing-in as the Governor of Anambra State,vowed to mobilize his colleagues and notable Igbo leaders to secure the release of Nnamdi Kanu, and called on civil servants to go to work on Mondays.

Despite Soludo’s peace initiatives however, the hoodlums started burning down local government secretariats in the state and even made an attempt to attack the house of the governor.

‘The actions of the gunmen showed that they were not interested in the release of Nnamdi Kanu but only want the Monday sit-at-home to remain, despite being cancelled by IPOB leadership.

‘These gunmen and their sponsors know full well the consequences of their actions and they are very serious doing it. The reason for their actions point to one fact that they are not interested in the release of Nnamdi Kanu from DSS custody.

‘The sponsors of these gunmen don’t want Nnamdi Kanu released, maybe because of their personal benefits which will cease if Nnamdi Kanu is released, hence the attack on anyone who dares to make a move to secure the release of Nnamdi Kanu,’ COSEYL said.

The group said many prominent Igbo sons had spoken against the Monday sit-at-home and nothing had happened, but immediately Soludo indicated interest to work towards the release of Kanu, they became agitated.

‘We should not be deceived over what is happening in the South East. Some people are getting heavy financial benefits over the incarceration of Nnamdi Kanu in DSS custody.

‘If Nnamdi Kanu returns, their business will cease to flourish and they will not be getting money, hence the attack on anyone who wants to secure the release of Nnamdi Kanu from DSS custody.

‘What is happening today is not agitation, but pure criminality and banditry. The killings going on presently in the South East must stop,’ the group said