Rancorous debates over the continued relevance of Gernot Rohr as coach to the Super Eagles, Nigeria’s national football team, reminisce decades of cock-ups and maladministration of the beautiful game in Nigeria.

The campaign of no love lost is a direct result of the sharp decline that football is undergoing in the country generally and particularly at the national level. It is shameful that the Nigeria Football Federation (NFF) and its teeming lovers of the round-leather game are back at the same crossroad, which signposts the stagnation of football since the golden years of the 80s and 90s. While winning is important in sport, there should be more to it.

In football, Nigerians cherish an aggressive, enterprising and entertaining play pattern, all of which are missing in the current Super Eagles that are anything but super. To give the game its deserving status, football handlers in the country must learn to place the country first ahead of selfish interest; go local in sports development agenda, and explore the potential of indigenous coaches ahead of foreign opportunists. 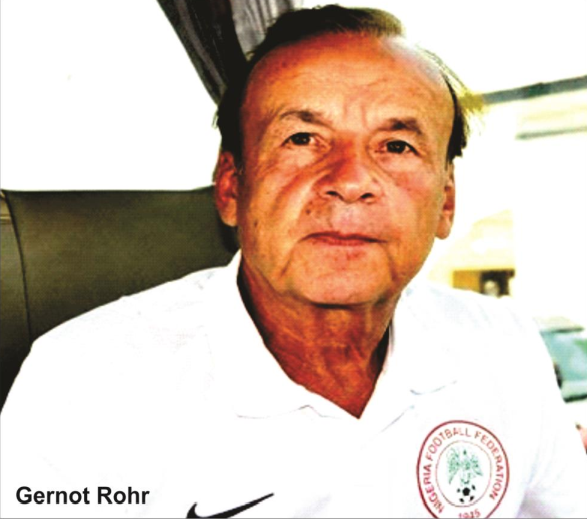 The NFF, led by Amaju Pinnick, assumed the management of football with a pledge to do things differently and develop the game, beginning with the Super Eagles. After the unceremonious exit of the Sunday Oliseh-led coaching crew, NFF once again went foreign to appoint the German, Gernot Rohr. Rohr’s technical competence was suspect ab initio.

In his three decades of coaching, he has not managed a Grade A team nor succeeded on the African continent. Yet, he was entrusted with the first-11 of the most populous Black Country in the world and a country with so much passion for football. Most unbecoming is NFF’s signing of an under the table contract with Rohr, details of which the public are not entitled to know.

What has made its way into the media, and has not been denied, is that the National Team coach earns a whopping $55,000 (N22.6 million) monthly. Meanwhile, he is not duty-bound to live in Nigeria, and neither mandated to watch, develop, or utilise local content in games. Rohr only shows up about a week to games, and fields all foreign-based footballers.

Many commentators have called the contract fraud against Nigeria, and the coach the laziest of all known national team managers. The present parlous state of the national team buttresses these notions.

Rohr has rarely contributed anything significant to Nigerian football; rather, the brand has made a rapid decline. Recent Super Eagles games have failed to elicit passion and interest typical of Nigerian national teams. Without any pattern of play, tactic, discipline or coercion, the team, right before the home fans, scandalously lost to minions like Central Africa Republic (CAR), having earlier squandered a four-nil lead to Sierra-Leone.

Most recently, the team of foreign-based stars in Leagues across Europe managed a lacklustre score draw with Cape Verde in Lagos! There is very little hope in the team going into African Cup of Nations (AFCON) in January, and playing a crunchy qualifier for the 2022 World Cup in Qatar.

Much more than Rohr, Pinnick and co. should carry the can. Maestro of the game on and off the pitch, Segun Odegbami, has called the Rohr contract a “collective stupidity.” Seemingly motivated by corrupt selfish interest of profiteering from such appointments, or just suffering from the colonial hangover of foreign superiority, NFF overlooked the array of local coaches and competencies for foreign counterparts that will deliver less.

The narrative is not any different in the female national football team, currently managed by the American, Randy Waldrum. Clearly, the basis of employing these foreign coaches have proven to be extraneous than logical against the development of football.

A bigger elephant in Nigerian Sports is the lack of developmental ideas and sustainable programmes across the board, which has reduced sports to attending competitions and attempting to win by hook or by crook. Three months after the local league came to a wrap, the 2021/22 season is yet to begin.

Female football league has not had a calendar season in years. And where is school sport today? There is more to football than qualifying for World Cups and making up the numbers with foreign-based talents. Ideally, the sport should develop Nigerian youths and from the grassroots.

Rohr is currently the highest-paid public officeholder in the country. Yet, he has failed in his remit of managing the Super Eagles well enough to play enterprising games. For all practical purposes, he is the last manager that Nigeria needs; and it is safe to assert that Nigerian football will go no places as long as he remains at its helm as manager.

The country should let him go and replace him with a more promising coach. It is time for football administrators in the country to look inward given the country’s weak finances, and at a time when most footballing nations and football clubs are assigning teams to their ex-stars.

Nigeria cannot be treating its own with reproach and hope to develop. Successful football teams require their own philosophy that is best nurtured by those within the rank over time. Moreso, it makes no economic sense to pay a football coach such humongous sum in a country that has pressing existential needs and borrowing to augment the national budget. That the private sector foots Rohr’s bill is a miserable excuse that only enables corruption and grounds accountability of the handlers.

The highest stage in the football world today is the FIFA World Cup and, as unlikely as it is that Nigeria or any African country will win it anytime soon, fans nevertheless want the country to give a good account of herself, not to simply make up the number of participants.

If ever an African country will win the World Cup, it should by now be exhibiting that potential. Nigeria has what it takes to lead other African countries to achieve this feat, but clearly not with her current dependent syndrome on a lack-lustre coach with minimal ambition. Nigeria will do well now to increase her local content (coaches and players) in footballing.

The late Steven Keshi deployed local league players in 2013 to win the Nations Cup in South Africa, and more importantly, the team gave a much better account of itself in the tournament than the Super Eagles have done in six years under Rohr. If the current crops of local coaches are accorded equal patience and respect that the Pinnick-led NFF has accorded the rambling foreign coach, Nigerians can expect better performance from their FIFA-licensed indigenous coaches.