We are in search of the silver bullet in our country’s leadership history. From Tafawa Belewa, Nwafor Orizu, to Aguiyi Ironsi Johnson, Yakubu Gowan, Murtala, Obasanjo, Shagari, Buhari, IBB, Yar’Adua, and Goodluck, the bullet has not been found to unlock the potential of the African giant, the most populous black nation in the whole world.

The reasons for the colossal failure may abound but one common denominator that underlines the failure is leadership. We as a people have not been fortunate to have a good leader at the helm of affairs. Twice, we nearly got it right, twice death came knocking, one by human greed propelled by the western colonial masters and the second by natural occurrence (Murtala and Yara’Adua respectively).

Save the two people mentioned above, every other person on the list is a failure based on the report card and statistics. Therefore, the simple question would be “are we cursed,or are we the cause of our problem?” Of course, there are some elements of the failure attributed to the public because of their inability to follow the simple rules and regulations of society. Can we find the silver bullet?

In the present situation,we have four bullets which we cannot  perfectly say what they are made of, but we can guess what they have done in the past. We cannot lump them together in one basket because we know to some extent what each of them has done in the past. Three of them have in the past been governors for eight years in states located in the north, east, and west. 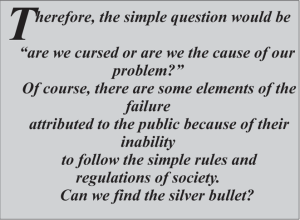 One of them has been the vice president in charge of economics for eight years. Therefore, it will be very easy for the public to examine what they have done in the public service. In recent times we have heard their statements and we can point to their trajectory. One of them has said that he will employ fifty million youths into the army to solve the unemployment and insecurity problem ravaging the nation.

And he will give them corn, cassava, beans, and plantain to eat in the morning, afternoon, and night. He further said that he will continue on the line of the present government to solidify their plan. The question is therefore what are the gains of this present administration? High insecurity and the collapse of the economy are trademarks.This bullet may not be made of silver.

On the other hand, one of the candidates has said on national television that ninety percent of his people are not literate enough to have social media. Meanwhile, he built a university in his state to educate his people. And after saying that ninety percent are not on social media, he came back to say that people should go to Facebook and do one minute video (mentioning Nigerian problems) and send it to him so that he will respond quickly.

Who will do the one-minute video since ninety percent of your people are not on social media? Similarly, he has not replied to his former boss (Obj) who accused him of heavy corruption while in government. This bullet may not be made of silver.

The next candidate, who used to be a governor, a senator, and a minister, who claimed that he has a cult followership in the north, was so arrogant that he said that the people of eastern extraction cannot be president of Nigeria, unless they find a way to team up with him and serve as vice president for eight years and he will help them to become the president in the future. Thanks to some wise negotiators who told him to go and sit down in Kano with his party and parochialism. May not be the silver bullet.

The fourth candidate has been a businessman who has recorded tremendous success in his personal business. He has said in public that he is a trader and a successful one by all standards. His certificates are not in doubt. He studied at Christ the King College Onitsha, University of Nigeria Nsukka, Oxford University, Cambridge University, Lagos Business School, and a lot more.

There is no need to over-labour the obvious because the record is public. He has worked in the financial sector as a director of five banks that are still flourishing to this day. As a governor for eight years,he pulled his state from the thirtieth position to the first position in educational excellence. As a governor, he rebuilt the whole primary schools and secondary schools in the state and invested over twelve billion dollars of the state money in a business that still runs profitably.

It was on record that civil servants were not owed for a single day and the state university was never on strike action, as we can witness today in our country. We have not seen a sign of corruption or arrogance in his track record. Should we give him a chance? Maybe the silver bullet.

We may have found the silver bullet this time, the one remaining problem will be the ability to use it. If we do not use it during this period in 2023, I can assure you that hundred silver bullets cannot repair the damage that will remain after 2027.