The Sad Case of an Old Ranger, Kenneth Abana

They gave joy to millions of their kinsmen immediately after the Civil War but today the joy givers are joyless. That is the sad situation of former players of the then all-conquering Rangers International Football Club of Enugu.

When the Civil War ended, the Igbo man was left almost penniless, his morale was low and the future looked bleak. Amid this was the loss of pride occasioned by the defeat he suffered in the war. But from the gloom and doom of that period, rose a group of young Igbo men who were also part of that war. 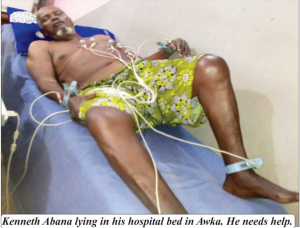 These young men created a different war front and that was in the field of play. Under the name of Rangers, they quickly restored pride in the Igbo man by conquering Nigeria in football. They soon became mini-gods as people virtually worshipped them. Every victory by Rangers then was seen as a victory for the Igbo Nation who through football won their own war.

Among some of the young men of those days who brought joy to Ndigbo were the likes of Godwin Achebe, Dominic Nwobodo, Emma Okala, Christian Chukwu, Kenneth Ilodigwe, Ogidi Ibeabuchi, Emeka Onyedika, Stanley Okoronkwo and Nwabueze Nwankwo.

Today, some of them are no more while those still living have become a shadow of their old selves. The people they gave joy have abandoned them to their fate. Among these living legends is Kenneth ”Magic” Abana. He was nicknamed Magic because of his great skills as a striker of repute in those days.

He was a terror to opposing defences against which he wreaked havoc with his thunderous shots and amazing goals. Today, the magic has gone out of the magician and Abana lies sick in his hospital bed, suffering from stroke and shedding tears of sorrow at his seeming abandonment by those he laboured to bring joy and hope to back in the days.

Yes, sportsmen and women in Nigeria do not have any automatic right of entitlement from the government or the people as they were paid for plying their trade. But then I believe that sports, being the opium of the masses, gives us some succour and we can do well by also acknowledging those giving us that succour; even on compassionate grounds.

Anyone who knew what these Rangers did in the aftermath of the war will not hesitate to come to their aid if they need such. Kenneth Abana needs our help and fast. The Magician needs our magic now.