The killing of one Miss Deborah Yakubu, Christian female student of Shehu Shagari College of Education, Sokoto, has once again brought to the fore, the fate of Christians in Nigeria, a country where everyone was supposed to freely practice their religion, but where only a particular religion holds sway. Deborah was beaten to death and burned by fellow students of the Islamic faith, for, according to them, blaspheming against Prophet Mohammed.

Just two days after some of the culprits were detained, a massive riot broke out by those who demanded the release of the killers and in the process, the riot turned into an attack on Igbos doing business in the city.

Their shops were looted, their property and in most cases the law enforcement agents were nowhere to be seen, forcing some of the Igbo traders and residents to seek safety on roof tops. This is Nigeria for you, a country where the ”One Nigeria” slogan has always been farcical.

Indeed, killing Christians in the name of the prophet is nothing new to Nigeria as it dates back to time. I happened to come across a compendium of such killings and felt it would be good to share. 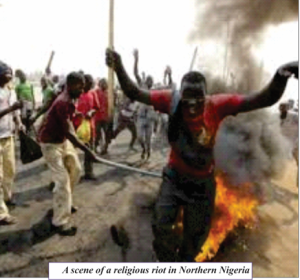 1987: Hundreds were killed in the town of Kafanchan, also in Kaduna, following an alleged blasphemy by a Christian evangelist.

June 24 and 25 1989: In Nafada Government Secondary School, Christian teachers and students were beaten and chased outside the school.

Married mother of two, Christiana Oluwatoyin Oluwasesin, was brutally murdered on 21 March 2007 after a Muslim student falsely accused her of tearing a copy of the Quran. The student had been caught cheating in an exam at Gandu Government Day Secondary School.

2002: Riots broke out in the northern city of Kaduna between Muslim and Christian residents over a planned Miss World Pageant to which many Muslims were opposed. The riots were fuelled by comments in a Nigerian newspaper article. Days of violence left more than 200 people dead.

Nov 24, 2002: At Gombe Government Secondary School, one Christian student was killed and several students and staff members were beaten and hospitalised. One Christian member of staff was beaten in his home along with his family, and his house and belongings were burnt to the ground. In the same year, a Christian chapel was destroyed by Muslim students at this school.

2004: The worst recent rioting occurred, hundreds of people were killed in waves of sectarian violence in Kano, ostensibly in retribution for similar attacks in Plateau State, Central Nigeria.

2006: At Nafada Government Secondary School, Muslim students destroyed concrete blocks meant for the construction of a Christian chapel, harassed Christian staff members and students, and burnt down the three churches in the town where most of the students worshipped – the ECWA, Baptist and Deeper Life churches.

Feb 2006: 30 people were killed in an uprising when a school teacher allegedly made blasphemous remarks.

2007: Mrs Christiana Oluwasesin was lynched by Islamic extremists in Gombe State, after a female student in the school she was teaching in, accused her of touching the Quran during an examination she was invigilating, though not true. She was dragged, stoned and stabbed to death, her body was eventually set on fire because they didn’t believe she deserved a befitting burial. Her killers were later caught during the uproar and they were arrested, they even confessed to the killing her but were later released and set free by those in charge of giving the deceased justice.

Dec 2007:  Sectarian riots between Muslims and Christians over a mosque construction left six dead and dozens injured in Bauchi city, while many houses were burnt.

Feb 4, 2008: A violent clash between a Muslim mob and the police over a woman accused of blaspheming the Prophet Mohammed in the North-Central Nigerian state of Bauchi left at least one person dead and five seriously injured.’The youths stormed the police station and insisted on taking the law into their hands,’ then Bauchi police chief, Adnan Tolman Gaya, told IRIN, adding that police had taken the woman into custody on 2 February to protect her from the crowd.

He said the police shot live bullets at the crowd, killing a man in his early 20s and that his men were under threat and had no option but to shoot into the crowd in self-defence. The youths then torched the police station and looted houses of policemen and Christians in the town, according to eye-witness accounts.

Nov 24, 2012: Extremists riot over blasphemy against Islam’s prophet. A rumour that a Christian man blasphemed against Islam had sparked a riot in the Northern Nigerian town of Bichi. Residents said four people were killed and shops were looted. The riot came on the day the incoming head of the Anglican Church, the Rt Rev Justin Welby, launched an initiative to promote religious tolerance in Nigeria.

May 31, 2016: Four killed in riots in Niger over alleged blasphemy in two days of violence over an alleged blasphemy by a Christian trader against Prophet Mohammed, residents. One of those killed was Methodus Chimaije Emmanuel, a 24-year-old who posted comments on his Facebook page.

June 4, 2016: Nigerian authorities said 74-year-old Bridget Agbahime, an ethnic Igbo trader and wife of a pastor, was mobbed and extra-judicially murdered at a market in Kano, Nigeria’s largest northern city.

Following reports that the woman was killed over a perceived insult on Prophet Mohammad, the northern chapter of the Christian Association of Nigeria said police were not doing enough to protect Christians and warned of a “looming religious crisis”.

August 23, 2016: A mob killed eight people by burning down the house of a Muslim man who intervened in the attempted lynching of a Christian student accused of blasphemy. The incident had sparked fears of religious riots in Nigeria.

August 25, 2020/2022: Nigerian atheist jailed 24 years for blasphemy in Kano, Nigeria, (Reuters). A Nigerian atheist and outspoken critic of religion was sentenced to 24 years in jail on Tuesday after pleading guilty to blasphemy charges in the largely Muslim northern state of Kano, in a ruling that puts a spotlight on religious freedoms in the country. Charges against Mubarak Bala are linked to comments he posted on Facebook in April 2020 that were critical of Islam and which authorities in Kano considered blasphemous and an insult to the religion, his lawyer said. When asked by A Kano High Court Judge, Farouk Lawan, whether he had been coerced to enter a guilty plea to the 18 charges, Bala said he did so of his own free will. Bala’s lawyer, James Ibor, said the sentencing was ‘very outrageous’ and could be challenged. He said the sentence infringed his right as an atheist.

May 12, 2022: A Nigerian Christian woman studying at a college in Sokoto State was brutally stoned to death and later burned after being accused of blasphemy.

Deborah Yakubu from Zuru in Repa Local Government Area, was said to be in her early twenties. She was killed by Muslim men studying with her at Shehu Shagari College of Education in Sokoto. Deborah, a second-year student of Home Economics, was accused of posting comments on a students’ WhatsApp group that allegedly insulted the Prophet Mohammad. Sokoto police confirmed the arrest of two persons in connection with the killing, which triggered outrage on social media with many Nigerians condemning the inhuman act. The killers reportedly shared a video of the gory incident showing them stoning the woman to death and burning her body. They kept shouting Allahu Akbar (Allah is the greatest) while filming, according to eyewitnesses. Security personnel posted at the college gates tried to intervene but were chased away by the angry mob. Passersby were being told to join if they were Muslims, eyewitnesses added.

Do we still have a country?