The Inglorious Fall of Goliath

An Igbo adage says, “E lelia nwa ite, o gbonyuo oku.” This means that a small boiling pot can quench a consuming fire. Another Igbo adage states, “Ejighi ebuka ibu eri nsi efi.” This entails that size does not matter. There are always surprises every time and everywhere. How the mighty are fallen! I have been a victim myself. When I was in primary five, an unforgettable incidence happened.

It was during school recreation. A very small boy like an ant was overpowering bigger boys in a wrestling contest. I was among the spectators. The impossible was happening. How can an ant overcome an elephant? I shouted, “No! The devil is a liar!” Instantly I removed my white shirt and proudly entered the arena to mesmerize the victorious ant who was in primary three. The whistle was blown.

The wrestling began. I tried all the best tactics I knew to bring the small powerful boy to his knees. But all my efforts were in vain. In fact I was sweating from the eyes, nose, ears and mouth. I was on the verge of drowning in a small river. The small boy’s body was like galvanized iron. All my efforts to lift the ant up and throw him down were abortive. Surprisingly, the ant lifted the elephant up and threw him down. 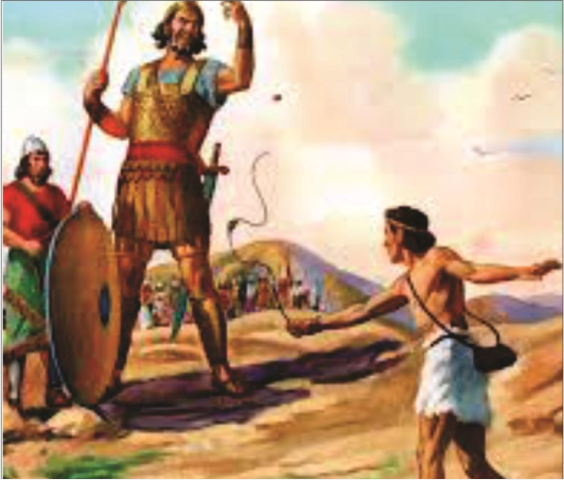 There was a loud applause from the spectators, which is still booming in my ears till today. Shamefully I got up from the ground and ran home, abandoning my white shirt at the wrestling arena. Also my school bag stayed for three days in my classroom because I absconded from school for three days. It was one of my friends who collected my shirt.

My grand mum asked me why I returned from school unceremoniously and half naked. I lied that I was suffering from sudden acute illness. Was I not psychologically ill? She bought me some pain relieving tablets. I pretended taking them with a glass of water in her presence, when I had thrown them away in order not to compound my problem. I am still regretting challenging the powerful ant which demoralized my fame. Indeed, pride goes before a fall.

Reading about the fall of Goliath in the first Book of Samuel Chapter 17 is like a dramatic script I played a part. When Goliath saw the tiny David coming out to challenge him, he roared like a lion and said, “Am I a dog that you approach me with a stick? Come and I will give your flesh to the birds of the sky and beasts of the field!” (1 Sam. 17:43, 44).

The courageous David replied, “You have come against me with sword, spear and javelin, but I come against you with Yahweh, the God of the armies of Israel whom you have defied” (1 Sam. 17:45). The battle raged. David put his tiny hand into his bag and brought out a stone. He slung it and struck Goliath’s forehead. Instantly the giant fell ingloriously. David ran and stood over his dying body.

Then he took the Philistine’s sword and cut of his stubborn head. The battle ended in favour of the Israelites. When the Philistines saw that their champion was dead, they ran away via different directions. Indeed, how are the mighty fallen! God endowed Goliath with physical height and strength. Unfortunately he abused the divine endowments. Selfishness and pride brought him down.

All powers belong to the Almighty God. Those in the corridors of power should realize that power corrupts and absolute power corrupts absolutely. The problem with man is that he refuses to learn from history. Thus, history continues to repeat itself. The fall of Og, the king of Bashan and Sihon, the king of the Amorites in the Old Testament is recounted till this day.

Many world leaders have likewise shamefully fallen. Africa is noted for sit-tight leaders who fall shamefully. Here in our country Nigeria, some of our past leaders fell from grace to grass. Regrettably, some of our leaders in power today are towing the path of woeful failure also. Leadership at all levels is service to God and the people. It is not for self-aggrandizement. It involves responsibility and accountability.

God at creation endowed mankind only with a little power. Had it been that He gave us more power, mankind would have been on the verge of overthrowing God in a palace coup. Initially man tried to challenge the absolute power of God by erecting the Tower of Babel which was intended to reach the abode of God (Genesis 11:1-9).

When God saw the physical and bold challenge, He confused the language of the builders. When they could no longer understand each other, they abandoned the giant project and scattered all over the globe.

Among all the creatures of God, men and women whom God created in his own image and likeness are the ones giving the Creator sleepless nights. At a point the Bible reported, “Yahweh saw how great the wickedness of man on the earth was and that evil was always the only thought of his heart.

Yahweh regretted having created man on earth and his heart grieved” (Genesis 6:5 – 6). This calls for sober reflection. Do I grieve God by my evil thoughts, words and actions? Does God regret creating you or me? If the answer is ‘yes’ then you and I are heading to ruin. It is time to make a U-turn. The English adage says that a stitch in time saves nine.

There are many Goliaths in our society today. They use their power and position to mesmerize others, especially the less privileged. Such people fail to realize that no condition is permanent. The Blessed Virgin Mary said it all in the Magnificat: “He (God) puts forth his arm in strength and scatters the proud-hearted. He casts the mighty from their thrones and raises the lowly.

He fills the starving with good things and sends the rich away empty” (Luke 1:51 – 53). Power and position are temporal endowments. According to Chinua Achebe, things can fall apart and the center can no longer hold. Humility is the watchword. Saint Vincent Pallotti maintains that humility transformed men into angels while pride turned angels into devils. Indeed it pays to be humble. On the other hand, it kills to be proud.

Let us confront the Goliaths in our families, clans, villages, towns, in religious and civil circles not only with material weapons but also with spiritual weapons. By God’s grace we shall surely defeat them. The Holy Scripture underlines that, “Our battle is not against the rulers and authorities and their dark powers that govern this world. We are struggling against the spirits and supernatural forces of evil.

Therefore put on the whole armor of God, that in the evil day, you may resist and stand your ground, making use of all your weapons. Take truth as your belt, justice as your breastplate, and zeal as your shoes to propagate the Gospel of peace. Always hold in your hand, the shield of faith to repel the flaming arrows of the devil. Finally, use the helmet of salvation and the sword of the Spirit, that is, the Word of God” (Ephesians 6:12 – 17).

The devil and his agents are not happy that we survived from 2021 to 2022. Prayerful and physical struggles continue.

We must intensify personal, family and community prayers. God can work with us and not for us. We should make a step forward and not to dwell on our past failures. We ought to follow Nkiruka (the future is brighter) this year. We shall succeed like David and kill the physical and spiritual Goliaths fighting against us in this year 2022.

All roads lead to Assumpta Cathedral Nnewi on 10th February 2022 for the enthronement of Most Reverend Jonas Benson Okoye as the second Bishop of Nnewi Diocese. It is evident that Satan and the Goliaths are working against the religious and episcopal enthronement.

Let us all intensify our spiritual weapons to overcome them, so that all glory will be to God on the appointed day. Long Live Bishop Jonas Benson Okoye! Long Live the Catholic Church! Long Live Nnewi Diocese!

History shall be made again in Anambra State on 17 March 2022. We remain grateful to God for the success of the gubernatorial election that took place in Anambra State on 6th November 2021, which produced Professor Chukwuma Charles Soludo as the next Governor of Anambra State. He is to succeed the outgoing working governor, Willie Mmaduaburochukwu Obiano.

Indeed man’s ways are not God’s ways; otherwise the bloody violence that preceded the governorship election would have marred it. Goliath wanted to hijack power by all evil means. But by God’s power good triumphed against evil. The election was free, fair and credible. God being awake, Anambra State is clearly the Light of the Nation. To God be the glory!

Finally, this year 2022 is filled with uncertainties. It is a transition year. The general elections come up in 2023. The Goliaths in Nigeria are powerfully working to thwart the will of the electorates by hijacking the presidency. Man proposes but God disposes. In God we trust. The few Davids of integrity in Nigeria should fight for us against injustice and election rigging.