The Highs and Lows of the Cubana Show

If there’s anyone who hasn’t heard about a certain Obi Cubana and the Oba spectacle, such a person is certainly not part of the social media. Indeed, throughout last week (I wrote this piece on Monday) the social media space was awash with stories of young Igbo business men storming Oba, a town in Idemili North Local Government Area of Anambra State, to commiserate with their boss, friend and business partner, Obi Iyiegbu, alias Obi Cubana.

Ordinarily, such act of identifying with one in their sad moment would not an have elicited much reaction if not for what many saw as the brazen manner those people identifying with him were throwing cash about as if money grew on tree tops. 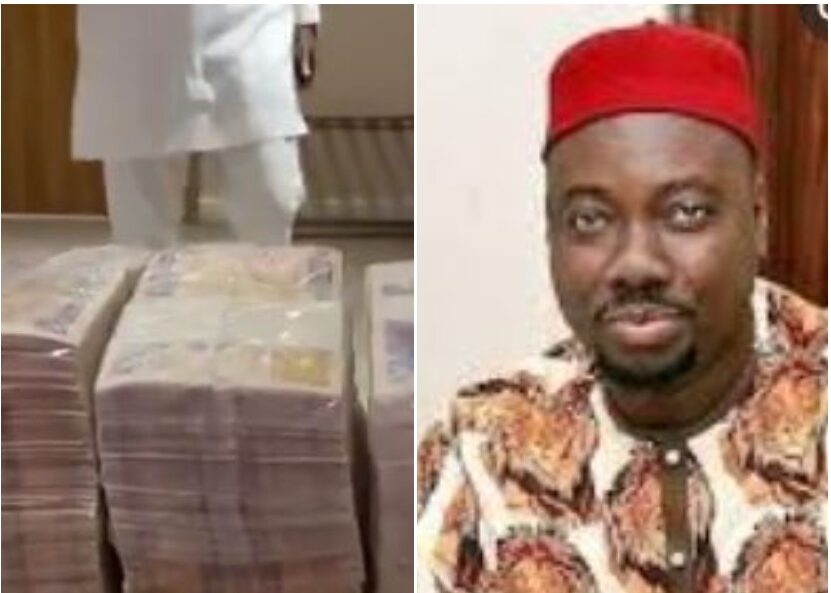 Those averse to that were mindful of the message such an act would pass to the highly impressionable youths of today who are increasingly believing that the end justifies the means in any venture they undertake.

A lot of young people, indeed, saw nothing wrong with such brazen and gaudy display of wealth. Their argument was that those people were spending their money and therefore it mattered not what anyone thought about it.

It was this line of thought that I labored all through that weekend to correct as I argued this with them on my Facebook wall. The arguments went back and forth, with neither side giving an inch in concession.

Maybe at this point it will serve us well for me to republish the last argument I had put up on my Facebook wall before we go further.

After what I’m going to say now concerning what happened in Oba a few days ago, I’ll elect not to talk about it again.

I’m constrained to write this following the apparent difficulty by some to get the drift of some of us. The general argument is that anyone is free to “enjoy” their money any way they want. I’ve no issues with this at all, so long as it is legit.

But our worry is the message being put across by the brazen manner of the funeral, or is it celebration.

In a society pulverized by poverty, owing to failed leadership, it won’t be wrong to expect people to take their destiny in their hands. But sometimes the liberty to do so can be counter-productive.

In our society today, the average citizen sees anyone who sprays money at events, rightly or wrongly, as belonging to the class of Yahoo Boys (be it the plus type or ordinary). This perception is so because it is largely such people that can afford to “waste” money. We also have other types of fraudsters, but they are united by their loudness.

Now, Cubana is super rich but we have seen people still donating money and other materials to someone who apparently has no need of them. This means such gifts are almost wasted. What Cubana will likely do with the excess money is to either increase his fleet of cars or plough it back into his private business. He will also “retaliate” when and if any of his friends are bereaved. Thus, such money really won’t benefit society as much as it should.

But consider a scenario where one or two of his friends attempt to deviate from the norm by establishing foundations in memory of Cubana’s mum, or building hostels for free in her memory across our universities here. Consider also a scenario where one of them donates the money in aid of research in her name. I’m not even talking about scholarship.

Any of these would leave a lasting effect in the minds of people and also help in directing the minds of the gullible and impressionable to the fact that such things could be done.

You can agree with me that society stands to reap more from such than from merely having people spray money on the head of one who’s already made it.

Thus, all we are saying is that money can be put into much more productive use than using it for owambe.

Every government needs help from citizens who can build roads, pay taxes and provide other infrastructure.

But don’t be surprised if some of these people in Oba are behind in paying their taxes for the development of their states. Don’t be shocked if you realize that the roads to their mansions are in terrible states. Don’t shout if you realize that some of their neighbours live in penury and are unable to train their kids in school. All that suffices for them is showing off and being hailed.

Anyway, it’s their money and they’re free to burn or even cook isi ewu with it.

I’m however worried that beyond all the spectacle, nothing may have been learned as a lesson by the youths watching. I’m sure that after watching, they’ll be in a hurry to “make it” and return to their villages to spray money. To them, the idea of donating to charity is alien.

The Oba Saga provided us the opportunity of changing the usual narrative but unfortunately it wasn’t to be. And there lies the ultimate tragedy!

The above was the kernel of my argument. I mainly focused on the demerits of just spraying money which I see as a waste, rather than channel such money to nobler causes like giving scholarship to the children of indigent parents, giving grants to institutions, building hostels for university students, supporting research and establishing foundations in memory of Cubana’s mother.

I reasoned that if those people spraying all that cash as though they printed them were to adopt my suggestions, such would have made a whole lot of difference in the minds of the watching younger generation. They will know that it is better to donate to charity than merely throwing money at children and adults who scramble and fall over themselves to collect.

Indeed, at the last count, we were told that over N257m had been raised for Obi Cubana by friends, while trailer loads of cows had also landed. And mind you, all that was for a burial; not a feast or chieftaincy title taking.

I frowned at the loudness of those nascent millionaires and cringed at what their action would represent in the eyes of the youths, the majority of whom now abhor any kind of hard work.

I also pointed out earlier that the Oba spectacle had set our society back by ten years, as long as the efforts of some people to inculcate the right values in the youths are concerned.

Those watching, I feared, would go back believing that success was all about flaunting one’s money in public, rather than supporting one noble cause or the other.

I recalled how the famous Nigerian footballer, Nwankwo Kanu, had set up a heart centre foundation for people with bad heart conditions. He could have elected to drive though many cities in a convoy and throw money left, right and centre.

For sure, many at those places would have grabbed some wads of the Naira note as they flew in the air but that would have been the end. After spending such money their problems would still stare them in the face; just as it does to someone who takes to drinking in order to forget their problems. They usually realize when the effects of the drink wear off that their problems have even multiplied, rather than evaporate.

But when people donate to causes, sponsor research and embark on philanthropic acts, society stands to gain. That was why I regretted that those throwing money everywhere in Oba had lost it. They had a golden chance to engage the youths in a new narrative but chose to grandstand.

But eventually I discovered that it wasn’t all gloom as the chief mourner himself, Obi Cubana, announced that he would give N1m to three hundred youths from his town to help them in their endeavours. That was very heartwarming and a great way to celebrate wealth.

That singular decision of his represented a big high point as it was bound to not just lift some youths out of poverty but will make them see that there are better ways of spending money.

It was a development that gladdened my heart and which reassured me that amid the noise and showmanship, somebody was still mindful of the need to give back to society.

But one hopes that our people should learn to act humbly and civilly even if they are the richest on earth. It is indecent to see people openly flaunting their wealth and splashing their money like touts. Dangote and Otedola are two of Nigeria’s richest men but we have not seen them behave like clowns in order to let others know they have money.

Our people’s loudness has often got them into avoidable trouble where they reside. My friend in South Africa once told me that Igbo people there are often targets of attack because of the way they act. Yes, the money you have may be yours, but please, enjoy such money without making noise.

If you must make noise, do so while doing noble things with your money. You can climb the iroko tree and make noise that you are building all the roads in your village. The late Anthony Enukeme of the Tonimas fame asphalted all the roads in Neni without making noise. But we would not mind if those young men I saw in Oba made noise while constructing roads in their villages or building/equipping hospitals.

At least, the young men who will be watching them will see building such infrastructure as something worth doing. But a situation where one sprays a million Naira in the full glare of the public on the head of one person who does not need it leaves much to be desired. We should make noise for the right reasons.

The brazen flaunting of wealth by those young men in Oba was uncalled for. But thank God the chief mourner will use part of the money to help youths in his community. These two represent the highs and the lows of the Oba Cubana show.