THE GALE OF INSECURITY IN NIGERIA

The issue of insecurity in Nigeria has become something of grave concern to all well-meaning citizens most of who continue to wonder how the country arrived at such a dastardly situation where no one is safe; and worse still, rather than abate, the problem is escalating and now totally out of control.

To start with, let us consider the meaning of the word: insecurity. According to the advanced learners dictionary, insecurity simply means: state of not being safe or protected. In a broader or wider perspective, insecurity presupposes a state of general breakdown of law and order, or a situation where the citizens of a country are exposed to an uncontrollable danger whereby everyone lives in fear of whatever might happen the next moment.

Insecurity, therefore, suggests a situation where a state of anarchy is unleashed on a general populace and the human life becomes ‘nasty, brutish and short to borrow the language of Thomas Hobbes. Insecurity in Nigeria is not a new phenomenon. 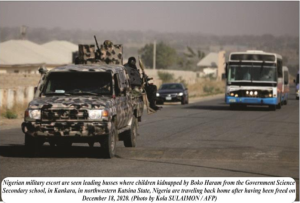 The country has always faced different difficult challenges at different times. As early as the 1960s, the country was involved in a three-year Civil War that totally decimated certain parts of the country. So many innocent people lost their lives to a war they neither anticipated nor supported.

Throughout the period the war lasted, there was so much insecurity across the country leading to the loss of so many lives. Shortly after the war, another form of insecurity was unleashed on the country by armed robbers. At a time, it got so rampant and scary that the military government at the time promulgated a decree recommending firing squad for armed robbers.

It was at that period that violent armed robbers like Ishola Oyenusi and his gang were executed at the bar beach. Ever since then, the nation has witnessed different groups of armed bandits terrorising the entire landscape for instance, Lawrence Anini and Shina Rambo, and it has resulted in the formation of different squad of the police force saddled with the responsibility of keeping men of the underworld at bay.

In recent times, herders have become another source of insecurity in Nigeria. Many innocent farmers are being killed on the farms they have lived in their entire lives by herders many of who now bear sophisticated weapons. The trend has led to so much disaffection between the Fulani and most of their host communities. It has also caused the refusal by most of the southern rural communities to accept different suggestions by the government for settling the herders.

The friction between the Federal Government and most southern leaders has reached a peak as most southern governors have started passing the anti open grazing laws which would disallow the herders from moving freely across people’s farms. But as the war rages on, many lives are being lost and the relevance of the government is being called to question.

Religious extremism is also a strong factor militating against peace in the enclave of insecurity that Nigeria has suddenly become. For more than ten years, the North Eastern, North Western and indeed, most parts of the North have been ravaged by religious extremists known as Boko Haram. Several thousands of people have been killed while a large section of the people were displaced and now live in Internally Displaced Persons camps spread across the whole northern states.

In addition, kidnapping for ransom has since entered Nigeria’s lexicon and the problem is becoming highly intractable. Innocent school children especially in the North are being kidnapped on a daily basis and taken into the deep forest while their parents are thrown into great despair.

From the foregoing, therefore, there is no gainsaying that insecurity in Nigeria today is more pronounced than in the yesteryears, and it is suggestive of the fact that the government has a great task before it to deploy whatever is needed to restore peace and normalcy to the land.

It should not be out of place for Nigeria to seek foreign assistance if need be. The duty of every government is to ensure the security of lives and properties of the citizens and whatever manner is adopted to guarantee peace and tranquility is not only welcome but also desirable

Oyewusi is the coordinator of Ethics Watch International, wrote from Lagos.