The opposite of real or original is fake. Fake can never be genuine. There are many fake products in the Nigerian markets. We must shine our eyes well. Once upon a time, I went into a popular market to buy a tin of Bournvitatea because I was lacking in vitality.

The one I saw was sealed artificially. But the seller convinced me that it was original and a new product. Since he was wearing a religious macro cross medal, I believed him by his words. I promptly paid for one medium tin and asked him for a receipt. He laughed at me and wondered how I was demanding for a receipt for one tin of Bournvita, because it amounts to economic waste.

I insisted. Reluctantly he searched through his drawer for some minutes. Stretching his waist acrobatically, he told me that his receipt is exhausted. Trusting in divine providence, I went home with the product to boost my energy.

On my way home, I bought a giant delicious loaf of bread against breakfast the following day. In my dream at night, I saw myself sitting at table like a king and enjoying the Bournvita and the special loaf of bread. Soon it was daybreak. As soon as I got up from bed, I said my morning prayer and offered Holy Sacrifice to the Alpha and Omega.

Then I went into the kitchen to boil water for the vitality drink and loaf of bread. When the water was hot enough, I poured it into a ‘who-send-you cup’. Next I poured three spoonful of the Bournvita into the hot water. I stirred it, but it was floating and refused to dissolve. Patiently, I poured a tin of milk into it and inserted three cubes of sugar and waited for some time for chemical reaction.

I stirred the mixture like thick soup; still the Bournvita contents were floating like dead bodies on a sea. To be sure, I tasted a little quantity of the Bournvita to know how it tasted. Lo and behold, it tasted awfully. On close examination I discovered that it was dried human excreta (nsikporonku). I spot the whole thing and shouted, “Tufiakwa!” I induced myself into vomiting. My intestine nearly came out with the vomit. 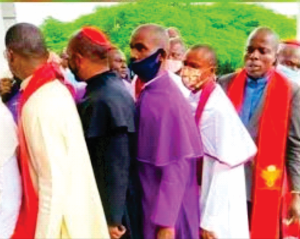 I exclaimed, “This is real wickedness and man’s inhumanity to man!” In fact, I ate poison. Again and again, I have heard the common Igbo curse ‘Riensi’ (Go and eat excreta). It was actualized in me. God forbid! Instantly, I rinsed my mouth with a mixture of salt, hot water and fuel in order to kill any germs within.

Without wasting time, I rushed madly with the product to the market where I bought it. Luckily, I could still locate the exact shop. Unfortunately, it was under lock and key. I enquired from the seller’s neighbor of his where about. Sadly, he told me that the man I was looking for died in a ghastly motor accident as he was going home after the closure of shop the previous day.

Raising my hands prayerfully I said, “The evil that men do live with them. May he rest in pieces!” The man was surprised and he asked me why I prayed negatively. I did not mince words in saying, “How can he rest in peace when he sold poison to me? Nemesis is at work.” Angrily, I dropped the tin of the fake Bournvita in front of the locked shop of the late seller and left. I shall settle the matter with him on the Resurrection

Day. Please be my witness.

Indeed, a cheat must be cheated in one way or the other. A faker must be faked. Impersonation is the highest deceit. A hood does not make a monk. A habit or a skull cap does not make a bishop. A genuine bishop is validly ordained and not bought. After all, clerical wears are sold in open markets. They can also be sewed according to one’s size and taste. There are bishops and there are bishops.

There is a funny layman in my area of apostolate whose nickname is Bishop. He is bishop without portfolio. His family is his diocese. His congregation consists of his mother, wife and four children. He pontificates over them. There was also the story of a certain pregnant woman who prophesied that the baby she was carrying in her womb would be a bishop of a church.

When eventually she put to bed successfully, she named him Bishop. In other words, the child is a born bishop. He received anointing in his mother’s womb. Did God not say, “Before I formed you in the womb I knew you, and before you were born I consecrated you and appointed you as a prophet to the nations” (Jeremiah 1:5)? Wonders shall never end!

Some politicians can go to extreme in order to achieve their selfish aims. Dirty politics has been taken to the gallery of the divine. It is the mother of all deceits. Recently, the ruling party gathered her faithful at Abuja during the unveiling of her vice presidential candidate for 2023.

Against the rule of justice and fair play, the presidential candidate of All Progressives Congress (APC),Alhaji Bola Ahmed Tinubu, chose the part of Muslin-Muslim ticket. Thus, the Christians were shut out of his political vision. The right thing would have been choosing a Christian from the North as vice presidential candidate since he is a Moslem from the South West. During the political unveiling, about thirty fake bishops and numerous fake pastors coloured the event to portray the fact that Christians were in support of the Muslim-Muslim ticket.

Probably, the fake bishops and pastors were “ordained” overnight by Tinubu himself, and assisted by Shettima. Their appearance was really suspicious and laughable. It was the mother of all deceits.

It was the greatest and costly joke of the year 2022. By the way, in normal parlance, real Christian clergymen do not attend partisan political gatherings as such. How come the fake bishops and fake pastors were bought to deceive the populace? They were promised the sum of a hundred thousand Naira each for the political episode. A house built on deceit is bound to collapse sooner or later.

You can deceive some people some of the times, but you cannot deceive all the people all the times. The deception is clear. It did not achieve its aim. The fake bishops were denounced by the Christian Association of Nigeria (CAN). Nigerians know the truth. The Bible makes it clear that the truth shall set us free (John 8:32). Later, one of the fake bishops confessed in these words: “We queued up and as undignified guests,we were made to carry our seats to secure a space in the venue.

I sat down with the pitiable face of a betrayer. My response the entire time was to look the other way every time the cameraman came on my way. I preoccupied myself with what I’ll do with the N100,000 I was due. Everybody knows the hardship that has befallen Nigeria. I am self-consoled. Posing as a Bishop was a step too far but I have mouths to feed….How do I explain my actions to my children and the ones yet unborn?” An attractive prize awaits anyone who can provide the correct answer to this touching question posed by this fake bishop.

In conclusion, anything fake does not last. Fake edible products and medicine have caused havoc in our society in the past and nowadays. Today,there are abundant fake news and information here and there, especially in the social media. Some dubious persons are specialized in spreading such fake news or information in order to create tension in the already tensed Nigerian space. Some weak minds develop heart failure after hearing or reading the fake news. Regrettably, the fake bishops’ episode is a slap on Christianity. The nemesis must come sooner or later, unless the dramatic personae make necessary atonement.