The Decamped NYSC Woman; A Case Study of Religion Clashing with Societal\Rules, By Stanley Alieke, Esq.

The cliche that your right stops when another’s right starts is absolutely correct. This was the case of a female corps member was decamped last week from the NYSC orientation camp in Gombe for her failure to abide by the stipulated camp dress code and ethics and some people have been clamouring that it infringes on her fundamental right of religion since her choice to wear that attire was based on her religious background.

The religious corps member who was decamped for wearing a long pleated skirt in the Gombe state orientation camp has become an internet sensation and has also caused mixed reactions as to whether her not being permitted to wear whatever her religion permits her on the grounds of her religious sentiment does not conflict with her fundamental right to choose and belong to any religion of her choice as guaranteed by s.38 of the constitution of the Federal Republic of Nigeria, 1999 (as amended).

People should understand how this fundamental human rights as provided in S. 33 up till S. 44 of the constitution really work; it is never an open cheque. Its provisions have their restrictions and limitations. The cliche that your right stops when another’s right starts is absolutely correct. 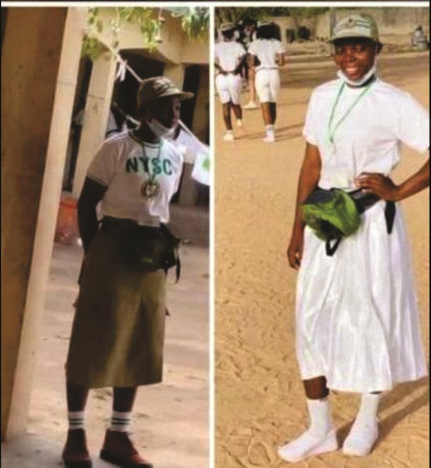 For instance, because you have the fundamental right of movement does not give you the right to trespass into another man’s property or walk into where you should not walk into in the purported exercise of your right, if you do that you are an offender and the law will come against you.

The decamped religious fanatic lady’s right to her choice of religion stops immediately she gets into the NYSC orientation camp gate and she must drop her religious sentiments at the gate and be ready to comply with the rules and regulations guiding the camp which one of it is complying with the standard and approved dress code.

Rules are to be obeyed, constituted authorities are to be respected. Anybody in disobedience of constituted laws of the land or organisation is a sinner. These are not my words but the words of the holy book (the Bible) which is the handbook of rules and corrections for the Christians and the believers of Jesus Christ.

The Bible for instance says in Romans 13v1-7:

“Let every person be subject to the governing authorities. For there is no authority except God, and those that exist have been instituted by God. Therefore whoever resists the authorities resists what God has appointed, and those who resist will incur judgment.

For rulers are not a terror to good conduct, but bad. Would you have no fear of the one who is in authority? Then do what is good, and you will receive his approval, for he is God’s servant for your good. But if you do wrong, be afraid, for he does not bear the sword in vain.

For he is the servant of God, an avenger who carries out God’s wrath on the wrongdoer. Therefore one must be in subjection, not only to avoid God’s wrath but also for the sake of conscience”.

Subsequently, 1 Peter 2:13-17 also says; “Be subject for the Lord’s sake to every human institution, whether it be to the emperor as supreme, or to governors as sent by him to punish those who do evil and to praise those who do good.

For this is the will of God, that by doing good you should put to silence the ignorance of foolish people. Live as people who are free, not using your freedom as a cover-up for evil, but living as servants of God. Honour everyone. Love the brotherhood. Fear God. Honour the emperor”.

Moreover, Hebrew 13vs 17 aptly put: “Obey your leaders and submit to them, for they are keeping watch over your souls, as those who will have to give an account. Let them do this with joy and not with groaning, for that would be of no advantage to you”.

I can go on and on in quoting the scriptures and different sections of the Bible which had already admonished those that believe in it to obey constituted authorities and rules including the NYSC bye-laws, dress code, rules, and regulations, and if you go in disobedience due to your Christianity religious sentiments then you are already a sinner who is also ignorant of what your Bible says.

Schedule 2, S.1 (2) of The National Youth Service Corps Bye-laws (reprinted in the year 2000) provides that failure to wear the uniform provided for any particular activity in the orientation camp is an offence and the penalty is that the corps member should be informed to go and wear the appropriate uniform, if he or she then fails to obey the individual will be asked to leave the camp.

This is not the first time religious sentiment is having a huge clash with the stipulated rules of an organization. Remember in December 2017 when one Ms. Amasa Firdaus, a Muslim faithful missed her chance of getting called to the Nigerian Bar that year due to her religious sentiments of trying to dress in her Hijab for the call to bar ceremony which was totally unacceptable then.

Organizational rules can be amended to accommodate religious sentiments and cultural differences just like the Nigeria Police Force recently amended its dress code to accommodate some cultural differences and religious sentiments for the female police officer and also the Body of Benchers amended some of the calls to bar dress code to accommodate some religious fanatics like Ms. Amasa Firdaus which allowed her to get called to the Nigeria Bar the following year but not until the rules are amended, you can either choose to stay away from the organization since it is not mandatory or you are forced to participate or join, and if you must join or participate you must be ready to comply with their rules and regulations guiding that institution.

Rules are not just made to be strict on man or to limit an individual’s freedom but rules are made to instil a sense of discipline, ensure conformity and achieve uniformity. In the NYSC orientation camp, if anybody could be allowed to wear whatever he or she likes based on any reason then there won’t be uniformity, and everywhere will be disorganized and disoriented.