These days it is a nightmarish experience to drive around Awka, the Anambra State capital – no thanks to the traffic gridlock experienced at major areas of the city.

Before now, the closure of the road between the office of the State Criminal Investigation Department (SCID) and the Nigeria Correctional Centre, had been shut by the police due to the activities of the infamous unknown gunmen. That meant that all those who normally took that road to access the Old Road, Awka, or to Nibo, started using alternative routes, leading to congestion.

But recently, the police also blocked the road passing through the office of the Independent National Electoral Commission, INEC. This appears to be the last nail on the coffin as a massive gridlock is usually triggered in the morning hours by those driving against traffic to access Aroma Junction from the Okpuno area and those trying to access Okpuno from the Ifite area. 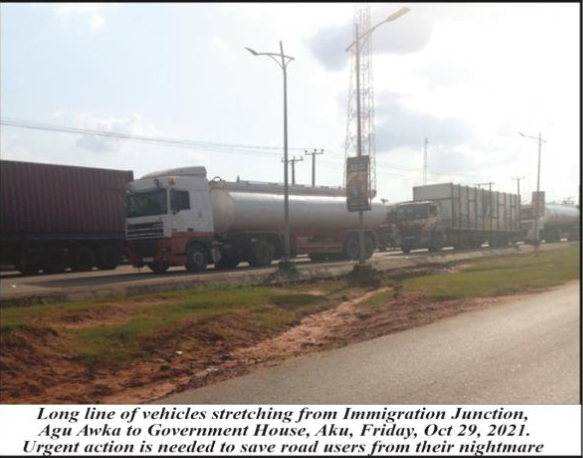 To add to the problem, the police checkpoints at Immigration and Amawbia, set up in the wake of the heightened activities of hoodlums, started causing what appears to be the mother of all gridlocks in those areas. Sometimes one could see long lines of vehicles stretching from Immigration to Aroma or from Amawbia to Kwata. In this situation, a drive that normally takes a few minutes lasts for upwards of an hour.

The presence of the police checkpoint at Amawbia is worsened by the bad portion of road there which on its own was causing traffic jams before then.

Yet again, the old road passing through Finotel Hotel at Agu Awka adds to the confusion. There, the line of vehicles, usually articulated ones, stretches from the junction of Finotel to Ezu River Bridge, the border between Anambra and Enugu. The other day, a driver of a trailer was seen washing and hanging his clothes at the back of his trailer just before Finotel, a development which showed that he had remained there for a long time.

But amid the suffering of commuters is what appears to be the curious silence of government and the inaction of those saddled with the task of easing and controlling traffic flow. Oftentimes officials of the Federal Road Safety Commission (FRSC) are not sighted at those places. When they are seen, they quickly disappear, and in the nights when even more terrible traffic jams are experienced, they are not seen at all.

Once this happens, road users are left to their devices as many try to shunt to stay ahead of others. Sometimes calls to the office of the FRSC for necessary action do not yield results.

We want to use this opportunity to call on the Anambra State Government to intervene and take urgent measures to rectify this problem. It is in such traffic jams that hoodlums snatch the phones and other belongings of those inside the vehicles and run away.

The government must ensure that authorities concerned are made to be up and doing and avoid a haphazard approach to work. At present, it is like the people inside the capital city have been trapped, while those coming from outside cannot get in. that does not speak well of a capital city.

Action and a lasting solution are needed here urgently.