The Cross is our Portion, Do Not be Afraid! A Reflection on Good Friday

It is well known truth that today many Christians teach that since Christ has suffered and died for us, there is no need for us to suffer. Therefore, suffering is not our portion. This is a false theology, and in fact, is not Christian in character, for it is illogical that the Founder of our religion suffered, only for us to live in the opposite way without any resemblance of Him.

Therefore, if Christ gave us salvation through suffering and death, it follows that we His followers will follow His footsteps, for to miss this point shows that we are not gazing at the Cross of Christ. When we look at Christ, we see Him on the Cross, and when we see the Cross we see Christ nailed to it.

Thus, it means that we must not follow a cross-less Christ, and we must not carry a Christ-less cross, for Christ and His Cross are inseparable. This Lenten Season helps us to understand this well. It is only by this means can we defeat the Devil who scares us with _”staurophobia”_ – fear of suffering, of carrying our cross. This is the message of Good Friday.

The exaltation of the Cross The Church Father and the Doctor of the Eucharist, St John Chrysostom gave one of the most wonderful and outstanding analogies through his rhetoric on how the Cross becomes a sign of defeat to the devil and of merit to us.

This convinces us that we should not fear the Cross as well as suffering, rather we should carry and embrace them. According to him, the Devil used three weapons to defeat the world in the Old Testament: a woman (Eve), a man (Adam), and the Tree of the knowledge of Good and Evil. But in the New Testament God used the same three weapons to defeat the Devil: a woman (Mary, the new Eve), a man (Jesus, the new Adam) and the Tree of the Cross. 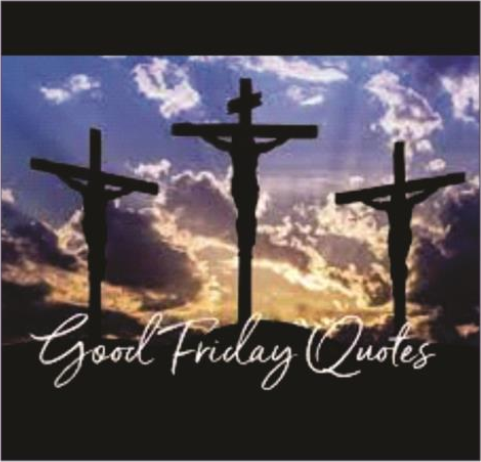 He goes further to compare the two Adams, saying that God made both of them to experience something similar: both were caused to fall into deep slumber, yet something different occurred, for while the ancient Adam was sleeping in the garden, God pierced his side and formed a woman, and while the new Adam was sleeping on the Cross, God pierced His side and formed the Church by the outflow of water and blood which symbolize Baptism and Eucharist and other Mysteries (Sacraments).

Dear fellow friends of God, in this season of Lent, the Holy Mother Church celebrates the Passion of Christ by the way of the Cross. It is relevant that before we go further in this consideration , let us pause for a brief moment in silence, as we gaze upon the Cross and stretch out our hands to Jesus who stretches out His pierced hands to us, in order to embrace Him with pity. St John Chrysostom’s teaching we considered above gives us assistance in comprehending what this season is.  Having noted this we now ask the questions: What is the significance of the Cross?

From the perspective of John’s Gospel as Biblical exegetes affirm, the Cross has several meanings.

The first is *Enthronement:* The Jews have tradition of having their Kings seated on the throne, to symbolize authority and place where he rules from. Jesus’ Cross is enthronement, for the Jews who mock Him as King ironically never knew they were making Him King.

The Roman procurator, Pontius Pilate confirms Jesus’ Kingship in the inscription *INRI*: standing in Latin for *I* esus *N* azarenus *R* ex *I* Iudaeorum. It means *Jesus the Nazarene King of the Jews*. Now, this word *King*, which is *Rex* in Latin is called *Basileus* in Greek and *melek* in Hebrew, from where *Melchizedek* is derived from. Interestingly, when  *INRI* is rendered in Hebrew, it becomes *Y* eshua *H* annasri *W* ammelek *H* ehudîm which gives us *YHWH* the sacred name of God exposed in the Theophany to Moses in Deuteronomy 3:14. That four lettered word is called *Tetragrammaton*, whose original Hebrew rendition is *’eyheh asher ‘eyheh* [I am who I am].

John Chrysostom gives further insights on this in explaining Jesus’ Crucifixion. In praising Dismas, the good thief at Jesus’ right hand, he said that his (Dismas’) faith surpasses that of righteous Biblical figures of the Old Testament. He then proclaims: “O admirable thief! You saw a criminal and you proclaimed him your God!” It is for this same reason that Venerable Fulton J. Sheen echoes that on the Cross, the crucified Lord becomes a King for He has made it His Throne. So, the Exaltation of the Cross means the Enthronement of Jesus as King.

This is captured in the words we proclaim during the Stations of the Cross when the priest exclaims: “We adore You O Christ and we praise You!” And we respond: “Because by Your Holy Cross You have redeemed the world”. The implication of this is that it is only the Person who was able to save the world becomes qualified to be King of the same world He saved.

If He is the King, then His Cross becomes the Throne from where He reigns. No wonder every Crucifix bears the initials of the original words Pilate placed on the Cross: *INRI*.  We now come to understand why every Good Friday, the priest proclaims the same words St Anthony of Padua used in his exorcism of demons: _“Ecce lignum Crucis, in quo salus mundi perpendit”._ (Behold the wood of the Cross in which the Saviour of the world was crucified). And in genuflecting we say: _“Venite Adoremus”_ (Come let us adore). So, the Cross means enthronement with reference to Jesus. We also become enthroned above our sufferings by God’s grace of victory.

Secondly, the Cross also means *Presence of God* in John’s Gospel. Jesus’ Presence on the Cross is seen as God’s Presence for He was in touch with the Father. The word for presence in Hebrew is *_kabod_*, such that its contrary is *_ikabod_*, to mean departure of God’s presence. Now, see the logic of God’s presence on the Cross. Christ is always identified with the Cross and in fact gives it new meaning by that word, *Crucifixion*, that is: *Christ is fixed to His Cross.* Therefore, there is no true Cross without Christ, and we do not preach the Christ without a Cross.

This is how this defeat occurred: While being crucified, Christ was mocked by the Devil through some people – the bystanders and even the thieves, but was consoled by His sorrowful Mother and few others beneath the Cross. Now, the defeat occurred when Christ forgave the good thief, gave His Spirit to the Eternal Father, after which blood and water flowed from His pierced side and healed the blind soldier, Longinus, and the earth shook, accompanied by darkness. In the mind of the Devil, he cannot understand how a so-called “criminal” can forgive a fellow criminal and wrought other wonders.

Again, in defeating the Devil on the Cross, Jesus defeats also everything that comes with the Devil and replaces them with what came with Him (Christ). Those things that came with the Devil are: sin, death, chaos and sorrow. But the Crucified Christ brought righteousness, life, peace and joy – each combating respectively the instruments of the Devil.

Cross, in the third place also means *Ascension.* In John’s Gospel, we discover that he did not record Jesus’ Ascension into Heaven as the three Synoptic Gospels did. This is because John understands Christ’s scenario of ascending to the Father to begin from the exaltation of the Cross, which implies that in being raised on the Cross, He is above the corruptible earth. Now on that Cross which that same John stands under, Jesus is shown by Him interceding for sinners to the Eternal Father. That is a way of explaining that if He prays to the Father for us while on the Cross, then His intercession is eternal from when He seats at the Right Hand of the Father.

My dear friends come let us adore the Lord, for this explains why He resurrected from death to life, saved us from sin by making us righteous, liberated us from chaos by giving us peace, and restored our joy by overcoming sorrow. By Christ’s authority in being exalted on the Cross, He has given us authority to reproach the Devil and every sin and temptation.

This is why theologians recommend meditation on Christ’s Passion and Cross each time we pray and when we are tempted. Among those who triumphed by this means in holiness was St Benedict of Nursia as he exorcised demons. His exorcism prayer reads thus: _Crux Sacra sit mihi lux_ (May the Holy Cross be my Light), _Non draco sit mihi dux_ (Let not the dragon be my guide), _Vade retro Satana!_ (Get behind me Satan!). _Nunquam suade mihi vana_ (Never tempt me with your vanities), _Sunt mala quae libas_ (What you offer is evil), _Ipse venena bibas_ (Drink the poison yourself). The dragon being referred to in the reproaches is the Devil.

To conclude our reflection, let us recall what medieval theologians said about man, namely, that man is _“spoliatus supernaturalibus”_ (bereft of Supernatural Grace) and _“vulneratus in naturalibus”_ (wounded in nature). This is because the old Adam was defeated by the Devil through original sin. But in gazing upon the Cross, the exalted Throne, we see the two hands of the Crucified Lord ready to restore with one hand, the Supernatural Grace we have lost, and with the other hand, heals our nature wounded by sin.

His hands are open to receive us. Let us give Him our sins and He will give us His Grace, for St Ephrem of Nisibis said, “Stretch out your hands to the Crucified Lord, and He will stretch out His hands to you. He who does not stretch out his hands to the Crucified Lord cannot approach His Table (Altar)”. Indeed, this captures the meeting point of the Cross and the Eucharist – Adoration of the Cross by genuflection on Good Friday as we do before the Eucharist on the Altar. This is because it is the same Person of Christ who is enthroned on the Cross that is also in the Bread, for the Cross and the Altar are the same. Let us stretch out our hands to Him and gaze upon Him saying:

We adore You O Christ and we praise You, because by Your Holy Cross You have redeemed the world.