Recently, some Jesuit priests were killed in cold blood in a mountain community in northern Mexico by the crooked ones. May the souls of those assassinated innocent priests rest in peace! The suspected crooked ones remain on the loose while the townspeople are frightened.

Despite this bloody attack, the religious Order is not in a hurry to vacate the area. Frustration has worsened with the failure to capture the assassins and the leader of a local drug gang by name Jose Portillo, alias the Crooked One. Anyone who knows the gang’s where-about is directed to report to the Mexican Police Authority. A handsome reward awaits any useful informant.

Many crooked ones are operating all over the world.  Few weeks ago, they stabbed ten people dead and fifteen wounded in multiple locations on the James Smith Cree Nation and in the village of Weldon, northeast of Saskatoon in Canada. It is one of the deadliest mass killings in Canadian history.

In 2020, a crooked man disguised as a police officer shot twenty-two persons dead in the Province of Nova Scotia in Canada. In 2019, a crooked man used a moving van to shoot ten pedestrians dead in Toronto.

For over a decade now in Nigeria, the crooked ones have sent thousands of innocent people to their untimely graves. The atrocity began in the Northeast of the country, which is the abode of the Boko Haram terrorists. These crooked terrorists have caused great havoc by wanton killing of people going about their daily businesses. As a result, many have been rendered widows, widowers, orphans and homeless. Unfortunately, the terrorists have spread to other parts of the country with their killing spree.

As if enough is not enough, crooked Fulani herdsmen have killed, maimed and rendered homeless many innocent Nigerians here and there. They kill and occupy the victims’ land. In other words, they are crooked enemies of occupation. They graze their cows into people’s farms. For this reason, some state governments have enacted law that bans open grazing. Despite this, the bloody menace continues. 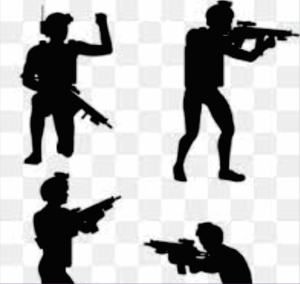 Crookedness is building on crookedness. A crooked sect known as bandits is unleashing terror in many places. They kidnap for millions of ransom. They kill at random. Many of these crooked ones are non-Nigerians who were imported into this country by the powers that be to unleash terror and make the country ungovernable. Their sponsors are within and outside government circles.

Crooked known and unknown gunmen have joined the bloody menace. They kidnap for ransom and kill as well. They operate more in the Eastern part of Nigeria.  They have killed many civilians, soldiers, policemen and other security outfits. Palpable fear of the unknown has grabbed the Easterners.

A fortnight ago, I came across a tall, fat and fierce middle-aged man popularly called Crooked. He is crooked in character and appearance. He is nearly the size of the biblical Goliath. In fact, he dwarfed me at that moment. I was trekking on that day. As soon as I saw him few meters away, I was frightened. He was coming from the opposite direction.

I made the Sign of the Cross and prayed silently in case of any unforeseen aggression. When he came closer, I almost entered the bush in order that his shadow or wave may not harm me. He passed me by and the ground was shaking like impending earthquake. He looked crookedly at me.

The adrenalin of fear spread all over my body. I greeted him frightfully, “Good evening Sirs!” I said the Sir in the plural because he is more than two persons in one. He replied like thunder, “Get away before I descend on you!” Since life has no duplicate, I fearfully took to my heels.

Is there any difference between a crook and a crooked person? Have you experienced a crooked cook? What happens when someone eats a plate of crooked food prepared by a crooked cook? That becomes instant suicide. Some people possess crooked faces and crooked hearts in these evil days. Indeed the devil has incarnated in some human beings in our midst. Many crooked persons are abundant in our society today. It is the age of man’s inhumanity to man.

My annual leave took me to Awka, the Capital City of Anambra State, recently. I was relaxing in the afternoon of a bright day when I heard an unusual noise and commotion. I was highly tensed up. I stood up emotionally and peeped through the window of my two-room apartment. I saw a 14-year old boy running suspiciously. Also I saw a helpless man running and shouting after him, “Thief!!!” The thief was running without break and the pursuer was pursuing him without looking back. Luckily, at the gate of exit were some local vigilantes.

The pursuer shouted, “Please catch that boy! He stole my phone-o!” Instantly, the thief was caught like a stubborn fish and was handcuffed. He was ordered to lie down. He had no choice than to oblige. Two big Android phones were found in his possession. One belongs to him while the other was stolen from the pursuer.

The man left the phone where he was staying as he went to urinate nearby when the crooked thief struck. The adolescent thief was asked to supply the phone number of his mother as part of investigation. He said that his mother died last year. Hardly did the thief know that the director of the vigilante group was born before Abraham.

His phone was searched and it paid. A number saved with Mummy was dialed. The supposed dead mother picked the call. The director asked her, “Please are you alive or dead?” The woman replied, “What type of question is that? Are you wishing me dead?” The director asserted, “Please come to number 00 Zik Avenue and see your crooked son.” The tensed widow appeared like a ghost within some minutes. She shed tears as she saw her son in handcuff lying flat on the ground.

The director looked pitifully at her and uttered, “Madam, welcome from the land of the dead. Why didn’t you wait until the day of resurrection? Your crooked son lying down here stole this phone. On interrogation he told us that you died last year.” The poor woman cried heavily and said to his crooked son, “So, you killed and buried me last year? Oh, my God! I am no better than a childless woman. Why did I give birth to a crooked boy like you?” I was touched to the heart from the window of my residence.

I hurried down and took the sorrowful mother apart. I offered her some touching words of consolation. Despite this, she left for home with tears and sighs.

The stubborn and crooked son was punished accordingly and was released. He went home to meet her living-dead mother. Who knows what transpired between the ‘dead’ mother and the crooked son at home? Please, if you were an eyewitness, come and calm my curious mind.

Various crooked things are happening in Nigeria and in the world today, ranging from gruesome killings, kidnapping, terrorism, cultism, internet fraud, bank account hacking, social media menace and fake news. Crookedness has eaten deep into the fabric of human society. Therefore, we must be prayerful and watchful. In God we trust!