The Church and Materialism: the Fr Ehusani Salvo

If there is one major commendable thing about the Holy Catholic Church, it is the freedom of its faithful to ventilate their feelings, albeit constructively, on issues that concern their faith. It is in this light that I have decided to once more revisit a sore issue in not only the Catholic Church but in every church today.

That issue is the quest for materialism. This new phenomenon has eaten deeply into today’s Church that her salvific mission is fast and speedily being eroded by mercantilism.

In many churches today one gets the feeling that worship has been commercialized to such an extent that rather than one going home filled with spirituality and the joy of encountering God, one goes home filled with memories of how an individual or two came up to the altar to make big donations.

Certainly it appears as though many churches are competing to build projects for which appeals are made to all manner of people (including drug barons, money launderers and thieves) to come help out. I remember a piece I wrote before the last synod of the Awka Catholic Diocese in which I called for a halt on projects so that more time would be devoted to true and unadulterated worship of God. It is a few years after that write up but it does appear that not much has changed.

All manner of people are still being called upon to donate to projects and same people are still being made bazaar chairmen, just as some of them have become knights of the Church too. The result is that the Church has lost the pull she used to have on many people who desire true worship of God; for, how, indeed, would a poor widow feel after seeing a man who refused to aid her, proceeding to the altar to announce a handsome donation? How would some people feel seeing a person of known dubious background chairing an event in the Church just because money is needed from him?

The above and more are things that have been coming between people and their faith. After writing quite a few times about this ugly phenomenon I was beginning to think that mine was a lone voice in the wilderness until I saw the submission of Rev Fr George Ehusani on the social media which strongly condemned the new norm in the Church. It was apparent that many people liked his submission, given the number of shares his submission generated.

But just in case you failed to see it, I am reproducing it below after which it is left for you to decide if the issues he raised are real or imaginary.

He said it had become embarrassing the way issues of fundraising are done in Catholic Churches without respect to the doctrines and teachings of the Catholic Church, particularly as regards activities of annual thanksgiving and bazaar.

Fr. Ehusani who is the Executive Director, Lux Terra Leadership Foundation, in a paper presented at the 2022 General Assembly of the Archdiocese of Abuja, last week, expressed concerns that financial pressure is increasingly being put on church members some of whom are deeply affected by the bad economy of the nation.

He said: ‘I had cause to share my discontent about the conduct of harvest thanksgivings and bazaars, as well as the conduct of fundraising in general in our churches these days. I told people how embarrassed and distressed I have become with all the elaborate arrangements that precede harvest each year, whereby for many weeks or even months, precious worship and religious instruction time is expended on preparing church members for the harvest thanksgiving and bazaar.

‘In the process, the sanctity, integrity and solemnity of the traditional Catholic liturgy are violated, and the vanity and vainglory of the people are not only accommodated but celebrated just so that more money could be raised for God’s work. Sometimes secular comedians, as well as fans of various football clubs are brought in to ginger the church members to contribute more. 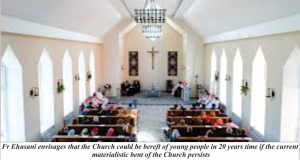 ‘The ingenuity and creativity of some parish priests and harvest committee chairpersons reach the extent that sundry articles and food items like apples, oranges, and cakes, are transformed into sacramentals, with specific rituals designed for blessing such items, so parishioners could buy them and consume them or take them home, so they may receive some special blessings or have their problems solved.

‘At funeral masses and weddings, the families involved are ambushed, forced, or coerced into announcing a donation for the Church, even while some of them are deeply mourning their departed family members or are in a state of economic distress and indebtedness. It’s all so sickening, nauseating and distressing.’

Fr. Ehusani made reference to the incident that happened at St. Philip’s Catholic Church, Ozubulu, Anambra State, on Sunday, August 6, 2017, which led to the unfortunate massacre of 13 worshipers.

He said: ‘The Ozubulu experience was the case of a young man with no known pedigree, qualifications, antecedents in business, etc; but who returned from South Africa, and was throwing money around, and single-handedly built a church and dedicated it with fanfare, and no one asked questions.

‘It was alleged that many among the clergy and laity knew that the young man couldn’t have made such wealth in any legitimate manner, and that many even knew he was a drug baron. Yet, the Ozubulu case is not an isolated one.

‘After that incident, I addressed a memorandum to the Catholic Bishops Conference of Nigeria, pleading that they consider it a matter of priority to urgently come up with clear guidelines on what manner of fundraising can be considered suitable in our churches, and especially within liturgical and para-liturgical settings.

‘These days, rogue public office holders, known treasury looters, corrupt civil servants and kidnappers, are now celebrated in our churches, considered pillars of the Church, decorated with Knighthood, made patrons of pious societies, and are regularly encouraged to come up to the sanctuary and given microphone to address the congregation at Sunday Masses, at funeral Masses, at wedding ceremonies, and at the anniversaries of priests and religious, etc., in anticipation of some donation towards church building or mission house projects.

‘These days, some so-called powerful priests have made themselves expert fundraisers, going from diocese to diocese, getting invited across the country to preside over harvest thanksgiving and bazaar, or some other fundraising events, and (it is) even alleged that some of these fundraiser priests request for a percentage of the funds they help to raise, using the most unorthodox, irreverent, distasteful, if not nauseating and perhaps sacrilegious methods.’

He requested the Archbishop, the Auxiliary Bishop, the Parish Priests and all other stakeholders, to work towards declaring a state of emergency on fundraising protocols in Catholic Churches, with conviction that no lasting good could come out of the abuse of the liturgy and the House of God in the name of fundraising.

He said: ‘Obviously, the reason for the crazy drive to raise funds in our churches is the excessively speedy and unchecked growth and expansion in physical structures, and our inordinate taste for very huge and expensive structures as church buildings all over the place today. We are attempting to build the kind of structures that took over 500 years to come up in Europe.

‘For example, the Archdiocese of Abuja is only 41 years old. But within these 41 years, we have engaged in building large churches in over 150 parishes and pastoral areas. So, almost every parish is building either a church, a hall, or a mission house; and the Archdiocese is building a new Cathedral at the same time.

Same applies in other dioceses across the country. This unprecedented expansion of physical structures places enormous burden on the worshippers, and a lot of pressure on the priests and parish councils, at a time of worsening economic fortunes of the Nigerian people.

‘And while this is happening, if we pay good and sufficient attention, we would realise that this unprecedented physical and structural growth is not matched by a genuine and discernible deepening of the Catholic faith and Catholic pastoral ministry, especially among the young population.

‘You will be worried if you check out the average age of those who regularly attend weekday masses, Sunday evening benedictions, sacrament of reconciliation, parish retreats or such diocesan celebrations as the Chrism Mass and the Cathedraticum. Most of the time, the young people, aged 15 and 35, are not found in any good number at such events.

‘Many of the children of our devout and faithful Catholics, whom we often depend upon to make major contributions towards these projects, have in many cases left the Catholic Church or have abandoned religious practice altogether. While we pursue these faithful Catholic adults for money, we often do not ask after, or show sufficient interest, in the faith commitment of their children. From all indications, many of them are abandoning the faith.

‘So, for whom are we building all these expansive and expensive structures? Churches are usually built for future generations, not really for the present generation. That is why they are built to last for hundreds of years. But from what we see of our global youth culture, reflected in the social media in our country today, the dire indications are that many of these church structures could be empty in just 20 or 30 years if we do not take urgent steps with the Grace of God, to turn the tide around.

Such is not going to happen if we keep chasing away the brightest, the most educated, and the most enlightened of our young people away from the churches, with our embarrassingly crude and shoddy methods of fundraising. We must begin today to do things differently, and we will achieve better results to the Glory of God.’