Before now, I thought that madness has to do with ugliness. A mad person is always dirty, tattered, unkempt and disordered in appearance and character. I couldn’t believe what my eyes saw when I went into a busy market recently to purchase some personal needs. Indeed what I saw was an eye-saw. I saw a very beautiful, tall and elegant woman who was well dressed from head to toe. Everything she was putting on was to match. Her face was angelic. Her nose was pointed. Her open tooth was excellent. Her eyes were charming. She was gifted both in front and behind. I admired her and praised her Creator for the good work done. Probably she was created on Monday. If you see those created on Saturday, you will know that the difference is clear. The Creator devoted ample time to fashion those he created on Monday. But those created on Saturday were hurriedly put together in order not to encroach into the Sunday rest obligation. Check your birthday and find out on which day of the week it falls. It determines how beautiful, handsome or ugly you are. Whatever the case, do not blame your Creator because he worked with time and space.

The beautiful mad woman I saw in the market was coming from the opposite direction. She was grasping a broken basket on her left hand. As she came along, she was laughing and soliloquizing. At a point she bent down and picked some useless things from the ground, inserted them into her mouth and started chewing them. Immediately I concluded that something was intrinsically wrong with her. The people who knew her were evading her. On my own part, I was ignorant of her mental condition. Thus I was courageously moving towards her. Immediately I came close, I greeted her by waving my hands with smiles to match. Unfortunately, her response was like a ballistic missile. She gave me a hot slap with some stars coming out of my eyes. She shouted, “Idiot! Run away!”  I stood still and asked, “Woman, are you mad? What have I done to you?” She sharply turned and gave me another hotter slap. Instantly my eyes turned bloody. Dizziness overtook my entire body system. As God’s anointed I began to bind and cast the demons in her. From nowhere she brandished a long sharp knife before my face. I sensed imminent deadly danger. Since a dead man does not give account of the cause of his death, I took to my heels, dressed in white cassock. I jumped into my car which was parked not so far from the market place. I was panting like a lizard that fell from a giant iroko tree. I was emotionally moved into prayer in these words: “Almighty and merciful God, I thank you for saving my life from the deadly attack of the beautiful mad woman. Please deliver her from the demons obsessing and possessing her in the name of Jesus Christ Our Saviour. Amen!” After this I put the key into the ignition and zoomed off.

Not everything that glitters is gold. Some of the people we see here and there, well dressed, elegant, beautiful or handsome are not mentally sound. Therefore, we must be alert always. My kinsman once said, “Whenever I go out to search for a woman to marry, all mad women would dress properly. Hence I become confused in making a choice.” Indeed madness is not written on the face. It is not determined by dress code. It is rather found in the mental faculty, which is not so easy to assess. Hence, caution is the watchword. Emotional reaction can be disastrous. 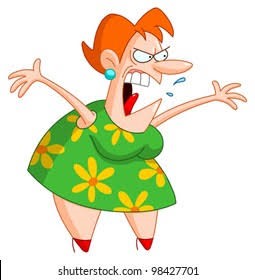 Once upon a time, a beautiful, respected iron lady was taking her bath in the mid-morning in a roofless bathroom. As usual, she placed her clothes on the wall. Accidentally, a troublesome mad woman came across and collected the clothes and ran away. The bathing iron lady peeped through the bathroom wall and saw her. Without wasting time, she stopped bathing and ran out naked from the bathroom. She pursued the naked troublesome mad woman to recover her clothes from her. Nakedness met with nakedness. The mad woman held the clothes tight and ran into a busy daily market. The naked iron lady also followed her with speed. Who is now mad between the two naked women? The answer is both of them. My people say that any madness that reaches a market place is incurable. The people who knew the respected, beautiful and iron lady were wondering when her madness began to the extent of running naked into the market place.

The last is not yet heard. Very recently a public function was being organized somewhere. The arena was filled with men and women of timber and caliber. As the Guest of Honour was delivering a marathon speech, fracas broke out within. It was between two beautiful, tall and elegant mad ladies, who were till then neither friends nor foes. One of them uttered some unpleasant words to the other with pointed fingers. The other responded with slaps on the right and left cheeks of the intruder. Instantly, fierce fight broke out between the two invited mad women, just like the ongoing war between Russia and Ukraine. Thus the grand ceremony was interrupted for some time. Some of the security men and politicians around separated the duo. The oral and physical altercation was quelled but the harm has been done. The two beautiful mad women equally share the blame. Impatience was at work. It was the madness of the year 2022. It has gone into the history of the state concerned. I learnt in school that the best answer to a fool is silence. Lack of self-control can be disastrous. Two wrongs can never make a right.

At this point, I entered into the Ministry of Grammatical Research to explore the connotation of madness. The Longman Dictionary of Contemporary English defines madness as “very stupid behavior that could be dangerous.” On its part, the Cambridge Dictionary defines madness as “the state of being mentally ill, or unable to behave in a reasonable way.” The meaning of madness from Oxford languages is as follows: (a) the state of having a serious mental illness (b) extremely foolish behavior (c) a state of wild or chaotic activity.

Here are some essential quotes: “Madness is a form of vision that destroys itself by its own choice of oblivion in the face of existing form of social tactics and strategy” (Michel Foucault). “O, hark! What mean those yells and cries? His chain some furious madman breaks; He comes …. I see his glaring eyes; Now, now, my dungeon grate he shakes. Help! Help! He’s gone! … O fearful woe, such scream to hear, such sights to see! My brain, my brain … I know, I know I am not mad but soon shall be” (Matthew Gregory Lewis). “It is an unfortunate fact that the bulk of humanity is too limited in its mental vision to weigh patience and intelligence those isolated phenomena, seen and felt only by a psychologically sensitive few, which lie outside its common experience. Men of broader intellect know there is no sharp distinction betwixt the real and the unreal; that all things appear as they do only by virtue of the delicate individual physical and mental media through which we are made conscious of them; but the prosaic materialism of the majority condemns as madness the flashes of super-sight which penetrate the common veil of empiricism” (H.P. Lovecraft). “Some madness doesn’t act mad to begin with, sometimes it will knock politely at the door, and when you let it in, it’ll simply sit in the corner without a fuss…and grow” (Nathan Filer). “Madness borrowed its face from the mask of the beast” (Michel Foucault). “What we see of madness is mostly a set of defense mechanisms against it, against the void and the anxiety that are madness. We see the obsessive ceremonies, the phobias, the hysterical symptoms, but all that is already part of a solution of the problem, unsatisfactory as it may be” (Ermanno Bencivenga). Beautiful women as well as handsome men can suffer from madness.

In conclusion, it is generally said that everybody is mad, but it depends on the degree. An uncontrolled anger is madness. Emotional provocation and reaction are equally madness. Any foolish behavior is madness. It is also madness to act without reasoning. The rule of morality states, “Think before you act.” It is madness to act before thinking. The motto of Young Catholic Students (YCS) is: “See, judge and act.” My Igbo people say, “Okuko ara na-ayi, aghaghi izute nnanwerede mmanya na-egbu.” This literally means that it will be disastrous if a mad fowl encounters a drunken cat. Judge for yourself what shall be the outcome. A word is enough for the wise.