The Assumption of Mary: The Signature of God’s Grace

Whoever understands grace appreciates the mystery of the Assumption, which registers Mary’s entire life as a project of grace. She was divinely elected by grace, saved by grace, sinless by grace and assumed by grace. In other words, grace pervades her life and provides the context of its meaning. Officially defined as a definitive truth by Pope Pius XII on November 1, 1950, the Assumption is the significant ramification of Mary being full of grace, and the logical consequence of the Immaculate Conception.

The super-abundance of grace in Mary explains the mystery of her life and deflates any possible attempt to confuse her nature with that of Christ.

Unwittingly, the unique role of Christ as the mediator is often juxtaposed with Mary’s intercessory vocation, leading many to consider her an obstacle to a relationship with God. Mary’s role in no way conflicts with that of her son and saviour, Jesus the Christ. As the first beneficiary of Christ’s salvation, she perfectly embodies and represents the salvation from her son by the singular privilege of God’s grace. In effect, Mary recognises her lowliness as the maidservant (cf. Luke 1:38) and her greatness because of God’s grace (cf. Luke 1:49) and very readily proclaims both.

Such a person at no time constitutes an obstacle to the true worship of God. While it is absolutely wrong to consider Mary a goddess or a benevolent element of divinity or even as the caring mother who appeases the mean God in constant need of placation, which is a form of idolatry, it is also a form of atheism to reject Mary. A wrong relationship with Mary can be a manifestation, to some degree, of either of the following two extremes: idolatry or atheism.

In his plan of salvation, God chose the way of incarnation, and thus chose the way of Mary. In so doing, what Eve was at creation before the Fall typified what Mary became at re-creation. In Mary’s arresting narrative of grace, what the first Eve lost, the second Eve retained. While Satan, symbolised by the serpent, confronted and defeated the first Eve, the second Eve (Mary), through grace, overcame evil, symbolised at its nascent stage by the serpent (cf. Gen 3:15) and at its developed stage by the dragon with seven heads (cf. Revelation 12). 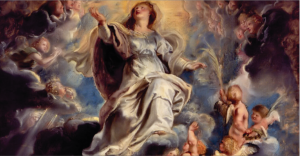 God chose Mary to represent the power of grace and to express the victory of good over evil, both in principle and in its ultimate expression. The figure of Mary liquidates the temptation of presenting God as competing with his creature, the evil one. As such, the mystery of Mary speaks to the all-prevailing and ever-victorious presence of God among his people.

She is the mother of God’s people in the order of grace. Like all mothers, hers is a vocation to exemplify God’s gracious and tender care for his people. Without doubt, it is a gift and responsibility, which is most expressly spelt by a tender and tenacious relationship of care and support.

Precisely because the magnitude of God’s being is beyond human comprehension, one labours fruitlessly to understand him without help. As a result, God makes his presence felt in icons and sacraments. Motherhood, certainly, to its degree, is a sign, vestige or mirror of God’s tender and maternal care. In their imperfect manner, mothers radiate this divine motherhood or maternal aspect of God.

By the singular act of God through the Holy Spirit, Mary, full of grace, became the vessel of honour, who bore the divine Son, Jesus Christ. God’s salvific plan began with the Spirit’s anointing of Mary’s womb as the prelude of the work of salvation wherein the radical intersection of divinity and humanity sets off.

Given her anticipated vocation, God completely soaked her with the ointment of the Holy Spirit, wholly transforming her as an anticipation of the end of what humanity will become. She was thoroughly suffused with grace, she was full of the Spirit, and consequently, consecrated for the unique vocation of divine motherhood. Mary’s Assumption into heaven is one of the ramifications of Mary’s possession of the full ointment of the Spirit.

Grace completely funds her life in a very efficient and effective manner that in her is the unique, comprehensive and highest expression of the possibilities of grace in all humans. Hence, that  grace of God, which enabled her to represent humanity’s destiny, and which the Assumption symbolises, stands in no need of further clarification.

Needless to say, with her yes to the will of God, Mary entered the salvific equation not out of her merit but as part of the divine salvific plan. God rendered her ready for the responsibility even before her conception and equipped her with the overshadowing presence of the Spirit (cf. Lk 1: 35). The mysteries of Immaculate Conception and Assumption are simply the registers of the power and gratuity of grace in her life, which represent the grace-insured beginning and end (Immaculate Conception and Assumption).

In a radical way, she was filled with the Spirit as his temple, an action of God, which preserved her from sin and prevented her from the corruption of the grave. On account of being thus honoured, she is blessed uniquely as an exemplar and model of the transformation by grace. Acknowledging this honour removes nothing from God’s glory; instead, it affirms and glorifies God’s majesty.

In the light of the mystery of grace, Mary’s Assumption into heaven bears the stamp of divine affirmation of the power of the grace of Christ. Delinking this dogma from the Paschal mystery of Christ accelerates its obfuscation thus harming the adoration to God and devotion to Mary. Accordingly, “the Assumption of the Blessed Virgin is a singular participation in her Son’s Resurrection and an anticipation of the resurrection of other Christians” (CCC 966).

As the bearer of the plenitude of grace, Mary deserves the honour and devotion of all children of God as an extension of the praise of the prodigies of the Lord. In the words of a Protestant theologian, Joel B. Green, “to say Mary is the ‘blessed One’ is to join the Spirit of the Magnificat, to prophesy about who God is and what God has done. Mary is the blessed one because of what God has done in her and through her. Not to bless Mary is to turn away from the work of God.” Similarly, Joseph Ratzinger had earlier made the point.

According to him, “the Magnificat shows us that Mary is one of the human beings who in an altogether special way belong to the name of God, so much so, in fact, that we cannot praise him rightly if we leave her out of account. In doing so, we forget something about him that must not be forgotten” (Joseph Ratzinger, “Hail, Full of Grace”, 1997, 116). It is, therefore, a privilege to celebrate the feast of the holy mother, Mary, and in the joy of grace, I wish you all a happy feast of Assumption.