…As Bayern Youth Cup Wounds Up

A two-day invitational tournament has ended in Awka, Anambra State capital, with ten players slated to be part of Team Nigeria that will take part in trials in Germany in October this year, reports Jude Atupulazi.

The tournament was sponsored by the quartet of Aspire Foundation, VOE Foundation, Bayern Munich FC and Anambra Sports Development Commission. 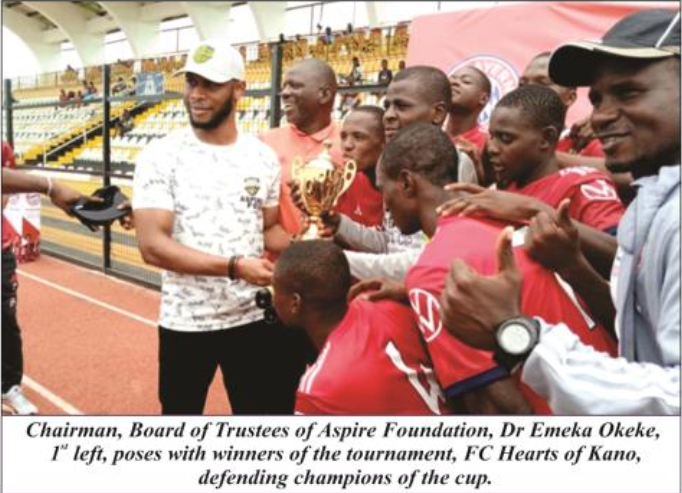 They were selected from a total of 100 players between the ages of 15 and 16 who participated in the 2-day invitational tournament.

Expressing his views on the tournament, the Proprietor of VOE Foundation and representative partner of Bayern Munich in Nigeria, Obinna Edeh, described the tournament as superb, noting that the environment compared with what was obtainable at Allianz Arena, Germany.

‘The young players selected will be nurtured at the Bayern Munich Academy and hopefully, they will hit the peak of their career in no distant time,’ Edeh said.

For the Chairman, Board of Trustees of Aspire Foundation, Dr Emeka Okeke, his organisation would continue to provide the platform for youths to express themselves at the world stage.

Okeke said his organisation would continue to support the efforts of the government by sponsoring events that would promote marketable skills and develop talent.

A retired German national team player, Hans Pflugler, offered technical supervision during the tournament, with the coach of the Bayern Academy, Christopher Loch, assisting him.

Earlier at a media briefing  of the tournament, April 29, the Aspire Foundation Board of Trustees Chairman, headed Dr Emeka Okeke, said the programme was part of his many projects under what he tagged, ”My Anambra Football”.

For his part, the Chairman of Anambra State Sports Development Commission, ANSSDC, Chief Tony Oli, urged the FC Bayern Team to consider Anambra State first whenever it planned to establish a football academy in the country, noting that the state was blessed with abundant talents and had been at the forefront of producing talents for the different cadres of the country’s national teams over the years.

He said the establishment of the new stadium in Awka was something that would reinvigorate sports in the state and return the state to her former glory.

Oli said it was the reason the Bayern Academy should consider Anambra first whenever it planned to set up a soccer academy in the country.

The tournament was won by the defending champions of the Bayern Youth Cup, FC Hearts of Kano.

Uchenna Onoja, who incidentally emerged as one of the selected ten players, had told Fides ahead of the tournament that it represented a huge opportunity for him to realize his dreams of making it in football.

Fides notes that since the opening of the stadium, there have been positive signs that the aim of establishing it would be realized. Already, Rangers International Football Club of Enugu, are using the stadium for its home games in the Nigerian Professional Football League, while the board of the Nigerian Football Federation (NFF) is billed to inspect the stadium for possible use by the country’s national teams in the future.