The Anambra State Government through the Ministry of Education, has approved a 50 per cent cut off mark for the ongoing recruitment exercise in the state.

The Commissioner for Education, Prof. Ngozi Chuma  Udeh, made this known after the State Executive Council meeting at the Government House, Awka on June 14.

According to the Commissioner,

Governor Chukwuma Soludo approved 50 per cent as cut off mark for the just  concluded examination with respect to the ongoing teachers’ recruitment exercise in Anambra State.

She said that candidates who scored 50 per cent and above should prepare for another round of the examination by this weekend.

Prof. Udeh urged candidates to go to the ministry’s website for update on the forthcoming examination.

‘The first phase of the

recruitment exercise kicked off with a Computer Based Test (CBT) exams conducted in 12 centres across the state on June  11, with over 30,000 candidates. 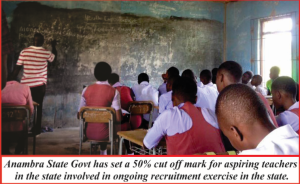 ‘The second phase is also part of the process to ensure that only the best is recruited into the system.

‘The state embarked on massive recruitment of teachers to fill vacancies in schools left as a result of retirement and other issues.

‘The last massive recruitment of teachers in the state was carried out in 1988.’

teachers against their sack by the Anambra State Government. They claimed that they were previously engaged by the Parent-Teacher-Associations of their various communities before the Obiano administration converted their engagement to staff in the state’s school system.

They therefore launched a protest against the current government for terminating their employment.

But Governor ChukwumaSoludo, in a press statement by his media chief, Mr Charles Aburime, denied that any teacher was sacked anywhere in Anambra State by his

The release had stated, ‘The attention of the Anambra State governor, Prof. ChukwumaSoludo, has been drawn to publications on the protest by teachers engaged by the Parent-Teacher-Association (PTA), purportedly converted to permanent staff in Anambra State schools that were sacked by his administration.

‘For the avoidance of doubt, no qualified teacher in the state’s school system has been relieved of his/her appointment.The government is rather repositioning the education sector according to standard practice and in line with the objectives of the Soludo administration.

‘The affected PTA teachers who were converted to the school system in the last days of the last administration in irregular, hazy circumstances, were only asked to regularize their employment with the government by taking part in the

online teachers’ recruitment test initiated by the state. Teachers all over the world are recruited through a serious and systematic pedagogical based process. The conversion method is rather new to the teaching field and is totally unacceptable in the state,’ Soludo had clarified in the press statement.

He said the idea was to ensure that only those with requisite qualifications, proven capacity and commensurate experiences were recruited into the system and that there were no plans to witch-hunt anybody or take away anybody’s job.