Mr Tony Nzoka, new State Coordinator NYSC Taraba, has been assured of the support of Royal fathers in Taraba State as he settles down to the task of NYSC administration in the State.

This assurance was given by His Royal Majesty, The AKU UKA, Dr Shekarau Angyu Masa-Ibi, Kuvyo II, Chairman Taraba State Council of Chiefs when the State Coordinator paid him a visit at his palace in Wukari, the heartland of Jukun Kingdom. 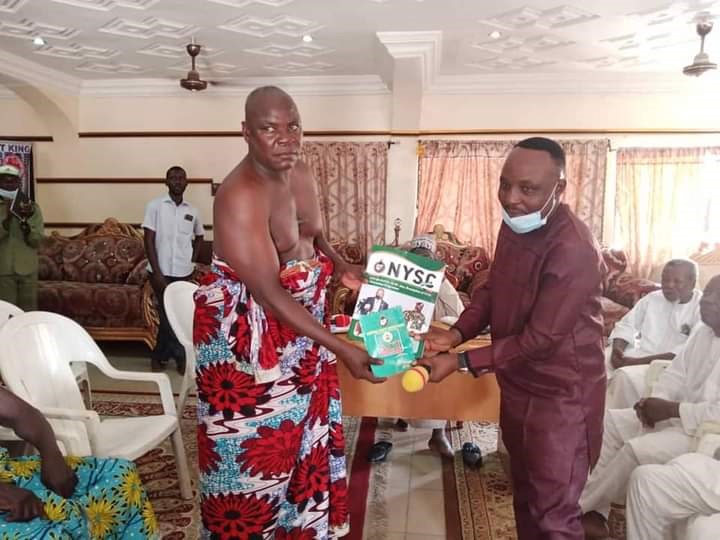 The Royal Father who informed the Coordinator that the Jukun people were lovers of visitors assured him of support, hospitality and acceptance all through his stay in Taraba State.

HRM Dr. Shekarau in his welcome message commended the Federal Government for the establishment of the NYSC scheme which he observed is a blessing to the nation. His Royal Majesty called for the expansion of skill acquisition training for corps members and for more support from Government on skill acquisition training for Nigerian youths as a panacea to youth restiveness.

Earlier, the NYSC Taraba Coordinator had informed the Royal Father that he was at his palace to seek his royal blessing and to appreciate his role as a major stakeholder of the NYSC in Taraba State. Mr Nzoka equally thanked His Majesty for giving attention to security of corps members in his Kingdom and pledged to always work for the development of  Jukun Kingdom.

The Coordinator was accompanied on the visit by the Hon. Chairman Wukari Local Government Council, Hon. Dr. Daniel Adigrace and some members of his management team.