Speaking to Fides in Awka, the Commissioner for Women’s Affairs and Social Welfare, Mrs Ify Obinabo, said the ministry had launched the first stage of the empowerment programme as sensitization to engage the less privileged and beggars in the city with a view to ending the menace.

‘Surprisingly, 80% or about 90% of them are non indigenes. We had to call a meeting with the non-indigenes. We visited their different town unions in Anambra State and cautioned them about the begging menace and its implications. From their town unions, we sensitized and appealed to them to educate and enlighten their indigenes and as well tell those that are yet to come into the state to stay back if their main purpose is to engage in begging business,’ Obinabo said.

She said that those caught in the business of begging were usually gathered and profiled in a database created by the ministry, with each person taken back to their different, original state.

‘However, if there is anyone needing help, we get sponsorship for the person or family. In the case of a child or teen, we get sponsors to assist such a person get back to school.

‘In our last meeting in Abuja with the Honourable Minister, l was given the floor to speak on their behalf. I reacted over the incessant migration of non-indigenes into the state. 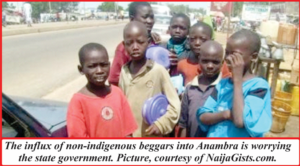 It’s alarming the way people come into the state purportedly for begging, and some go to the extent of hiring their little kids under 1 or 3 months to be used as a tool of appeal for begging on a pay roll of N20,000 thousand Naira weekly, irrespective of the weather conditions,’ the commissioner revealed.

She said that some of the children being used for the act were currently being accommodated in a home set up by her ministry.

The commissioner said her ministry had been able to apprehend several of the defaulters and charging them to court.

‘Though, after some time, we get to release them and ensure that they are taken back to their villages or towns. I take pictures and videos of evidence showing the time of the release and have a gentlemanly agreement with the parents to move out of the city immediately or face the consequences if further caught in the act.

‘Some are accommodated inside our community home and are educated that it’s against child laws and any default for a second time will see the person going to jail,’ she disclosed.