Sylvester Mgbemfulu: a Priest and a Teacher

We cannot study our subject, Monsignor Sylvester Mgbemfulu in isolation, but must first look at the subtle interplay of culture, tradition and heritage, all of which helped shape his outlook and even concept of reality.

Among these influences, perhaps after his parents, there is his home-town. Born on the 30th of September, 1945 in Ugbene, in today’s Awka North Local Government Area of Anambra State, he attended primary schools in Ugbene, Ugbenu and Nando. These towns of relatively same level of development, tucked away from civilization at that time, may have contributed to his shyness. After his primary education, he stayed in the village helping his parents in their vocations, especially farming and fishing. He still recognizes the species of fish by their silent cries, speed and other aquatic characters which only fishermen understand. 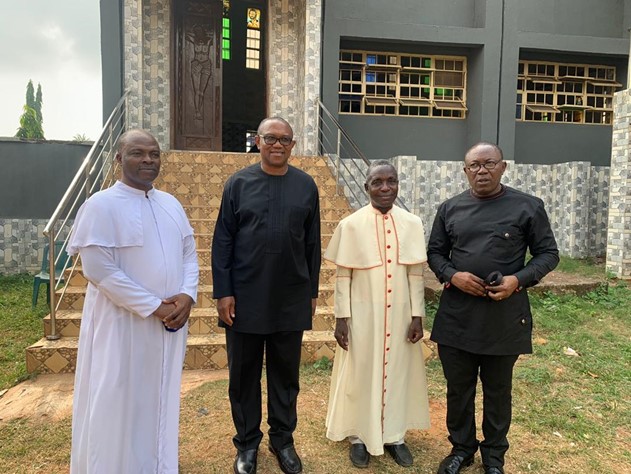 While in the village, like other children, as testified by some of his age-mates such as Chief Simeon Dilinyeru, he was awed by the periodic visits of early priests to the area for spiritual ministration. At this point, he started yearning to become like them, particularly, as revealed by his immediate elder brother, Mr. Longinus Mgbemfulu, with the support of his father who saw it as a good omen that he was born on a day one of those priests first visited their community. Fortune smiled his way when, in 1962, another of his elder brothers, Hon. Mmee David Mgbemfulu took him to Aba to join him as a vendor of newspapers.  The movement to Aba exposed him to another stream of influence as one experiences with the movement from primitivism to modernism.

As a young boy, Mons as he is fondly called by his people, seemed ready-made for the priesthood. This was attested to by his people of Ugbene, including his brothers and age mates and brothers who contend that he was made for the priesthood and nothing else. Speaking to them, this writer figured out that Mons has always been calm, reserved, soft-spoken and inclined to sanctity. Simeon Dilinyeru reveals that they “grew up together and went to school at the same time. At that time some people were against his becoming a priest but we knew that he would eventually become one because of the holiness of life that was decipherable even at that young age. Rather than struggle for anything, he would let it go”.

From Aba, Mons was enrolled at All Hallows Seminary, Onitsha in 1963. In 1968, he moved on to Bigard Memorial Seminary, Enugu. Due to the Civil War, the Seminary was largely peripatetic, moving from one town to the other as dictated by the uncertainties of the war. Eventually, he was ordained on the 20th of April, 1974, by Francis Cardinal Arinze, then the Archbishop of Onitsha. We can, therefore, say of him just like all priests and ex-seminarians who imbibed the right training, that he was moulded by the best institution for that purpose – the Seminary. There, his body and mind, character and disposition in life were profoundly formed. He was undoubtedly presented with the usual opportunity to  devour books hungrily, to imbibe sound  discipline, to think clearly, to inspire holiness by living a holy life, to realize how sweet and noble it is to work for God and perhaps as sometimes the case, he got intoxicated  by  over-dose of religiosity.

Even as a young priest, the priestly vows of obedience, poverty and chastity made the greatest meaning for him and he resolved to succeed rather than fail with them. As a new priest, he received the gift of a motorcycle from his people, which he put to full use in the propagation of the gospel. Seeing the competition of virtues in him, Cardinal Arinze took special interest in him and sent him to St. Paul’s Seminary, Ukpor as the Rector, after a stint as the Assistant Parish Priest to Monsignor William Obelaguat St Mary’s Catholic Church, Inland Town, Onitsha. Following Mons’ progress and love for education with keen interest, the Cardinal sponsored him to the University of Nigeria, Nsukka (UNN) to study Chemistry.

On graduation in 1981, while waiting to resume in the Seminary of the newly-created Awka Diocese under the pastoral care of Most Rev. Dr. Albert Obiefuna, Mons was posted as an Assistant Parish Priest to St Patrick’s Cathedral, Awka which then covered many towns. During this period, this writer served Mons at mass at St. Michael’s Catholic Church, Dodo, Oji River. We then usually referred to him as the Short Priest. He was about five feet tall, but the authority and majesty of the priesthood make him seem taller. Mons has maintained his stature over the years without any extra ounce of flesh to burden him simply because he is exceedingly temperate in food, drink and other worldly indulgences.

The following year, 1982, his long sojourn in the Seminary began at St. John Bosco Seminary, Isuaniocha. Except for three years he was in the USA on sabbatical, he was in the Isuaniocha Seminary for thirty-eight years variously as the pioneer Rector, Academic Dean, Co-ordinator of Science Laboratories, Spiritual Director, from which he retired in 2020, after reaching the canonical years of seventy-five. Only priests that are manifestly free from every kind of corruption and superior to the consideration of money can stay in such an environment for almost forty years without some protest.  On the 17thof December, 2020, during his send-off at Isuaniocha, Mons exposed his inspiration in his address: “One of the past Rectors of this seminary, Very Rev. Fr. Ikem Oliobi did inspire me with the newspaper cuttings he used to paste on the walls of his living and sitting rooms. One of such cuttings read: ‘Bloom where you are planted’. What a statement with lots of lessons”.

With the fore-going, the search for Mons’ secret of remaining in the seminary during his pastoral work ended. The popular view about his long stay in the seminary was captured by a priest of the diocese, Rev. Fr. Dr. Cosmas Ebebe this way: “For his many years of teaching in the Seminary, some priests used to joke that he has been ‘forgotten’ there because his location remained the same when other priests were given new postings”.

But his stay in the seminary was eventful and could be seen from the reactions of many of the students that passed through him. Each epoch had its own identity of Monsignor Mgbemfulu.  During the writer’s own time, 1987 to 1989, we called him “Omo”. The set of the late 1990s nick-named him “Sawan”.  The Chemistry laboratory was his second home; and the students joked he did not buy fuel for his brown Corolla panel van but rather mixed some chemicals in the lab. With which he powered the car.  As a teacher, he is Chemistry-intoxicated as he could be seen now and then fiddling with specimen, opening and closing the descanter or pouring one chemical into a test tube. His name provided chemistry with a synonym.

Fr. Obinna Dike remembers his first day in the Chemistry lab., where he usually had his lectures and how Mons welcome the class with the song: “Come and see American Wonder”. Was it meant to frighten them? Not at all; knowing Mons, it was a joke he used to welcome some of his students who were thinking about what Chemistry had to offer.

Whatever impression students had of him, mostly informed by the exuberance of the youth, one thing is clear: Monsignor is a person that can reason and be reasoned with. He is possessed of great personal warmth and what can be called spiritual charm.

The sentiments of his former students were summed up by the Chairman of Old Boys of the seminary and a lecturer at Oko Polytechnic, Mr. Celestine Ostende Oguegbu in  a compact paragraph:  “Permit me to remark that throughout his stay in this Seminary, he was an outstanding tutor and committed to promoting excellence in both our education and spiritual life. Monsignor is ever smiling, always tolerant and eager to help when students have things bothering their minds”. Earlier, in an eloquent exordium, he had described Monsignor as “great teacher of teachers”. Bursting with compliments, Mr. Tochukwu Oboboegbunam described him as a “rare synthesis of ability and integrity”.

Though he occupied all positions available in the seminary, one constant thing was that he remained the Chemistry teacher and the Chemistry lab. Was his office and second home, thus  echoing by his life-style, the statement credited to Democritus: “I would rather discover a single demonstration in Geometry than win the throne of Persia”. Sometimes, it was even rumoured among Seminarians that the secret of his looking young every day could be explained on the possibility of Mons having discovered through chemical mixtures an elixir to look younger which he kept to himself and periodically sipped in the chemistry lab.