The shocking ouster of the Super Eagles at the 2022 World Cup playoffs is a major letdown that reeks of the old maladministration of Nigerian football. It is disappointing that Nigeria had an awful exit from the last African Cup of Nations (AFCON) it was touted to win in Cameroon.

Worse is that failure to learn vital lessons to turn the corner and avert the lurking World Cup tragedy that was weeks away. But besides issuing a red to the coaching crew in a knee jerk reaction, the standard-bearers of Nigerian Football Federation’s (NFF) eight years of inefficiency should also get their marching order.

Like everything else in modern societies, football management starts and ends with the quality of leadership at the top. The NFF has the exclusive responsibility to grow the game of football at all levels in the country and offer good representation on the world stage. In the last eight years of the current handlers, led by Amaju Pinnick as its president, Nigerian football has declined in fortunes at all levels and rating.

Age-grade championships that were erstwhile the pastime of Nigerian teams have been lost to more enterprising African countries. Domestic leagues have remained stagnant and their top teams are not up to scratch on the continent. On the strength of output, football administration has been a miserable failure, though millions of followers remain under the illusion of a better prospect in a country that generally offers very little in national pride. 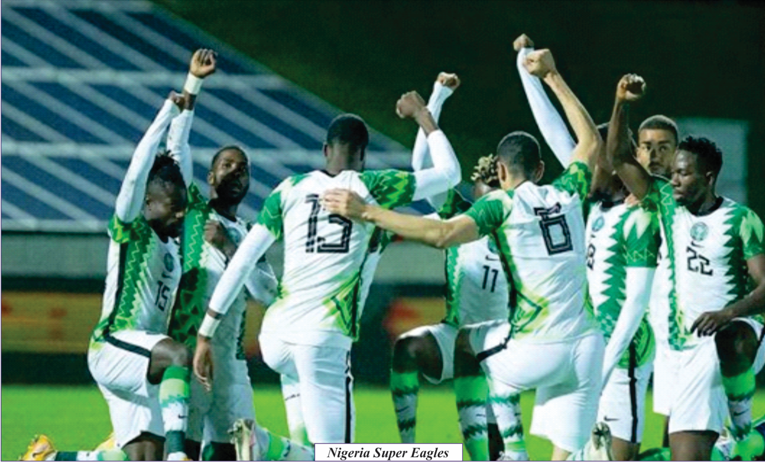 Sadly, sports enthusiasts were shell shocked when it registered that the men’s senior national team, the sole marketable brand of NFF, will not be at the Qatar World Cup scheduled to kick off in November. In front of over 70,000 home fans that crammed into the 60,000-capacity Moshood Abiola National Stadium, Abuja, the team played a lacklustre score-draw against a less-fancied but hungrier Black Stars of Ghana. Many that had anticipated a better outing, following a barren draw in Kumasi, Ghana, were disappointed at the casual approach of the foreign-based stars that played.

Irate crowd that had been lured to the stadium with free tickets and transportation– an incredulity in the modern business of sport – pounced on players and officials in vengeance, destroying the newly refurbished stadium in protest. The free-for-all mob action was indeed a national embarrassment that should not go uninvestigated and duly punished.

Indeed, Nigeria is a football powerhouse in Africa and the citizenry is entitled to expect a dominant play, especially against a West African neighbour and rival like Ghana in a World Cup playoff. But the lackadaisical team play was not any different from that exhibited when the Eagles, before the home crowd, lost to Central African Republic (CAR), threw away a four-nil lead against Sierra Leone last year, and eventually fell apart against Carthage Eagles of Tunisia at AFCON 2021.

Clearly, with the collapse of the talent ecosystem and its engineering at home, the NFF in its desire to cover up its gross inefficiencies has consistently packed the national team with foreign players of average individual brilliance that were literally begged to don the national colours. And that has been the unfortunate trend since the 90s’ golden era of Nigerian football. The fallout of ‘anyone that plays overseas is good enough’ is having a national team of strangers that are lacking in cohesion, discipline and passion to play to strength.

Pinnick’s NFF promptly fired the interim coach Augustine Eguavoen and his technical crew. The move is justifiable given the level of interference the manager allegedly allowed in players’ invitations and team selections. But by extension, the Pinnick-led board should as well have thrown in the towel having admitted failure to meet the expectations of countrymen.

Perhaps they did their best but that is not good enough for our country. It is that path of honour that NFF’s counterpart in Algeria toed when the entire board resigned two days after the Desert Warriors lost their World Cup tiebreaker to Cameroun. The current NFF should not be indulged in self-gratification as a reward for disastrous outing for the country.

Nigeria is the loser and should demand accountability from those opportunists at the helm of the debacle. Beside the local endorsements and corporate sponsorships that should have stimulated the beleaguered economy in a World Cup year, the Super Eagles also missed a chance to attract FIFA’s $1.5 million largesse for qualifying and another $9 million for playing in the first round, out of a possible $42 million up for grabs by the eventual winner. Regrettably, Nigeria shall get no reward because of its shambolic representation where it matters the most.

But if the Super Eagles must return to reckoning early enough, quality administration of football should not be an afterthought. In the short run, there is a need for the NFF Glass House to retool and begin preparation for the next AFCON in 2023. The Super Eagles team not only needs a new set of coaching crew, it also needs genuine administrators at the helm of affairs.

Credibility matters if football must attract the right corporate sponsorship and be seen as a business concern. It is a shame that the local league has no corporate sponsorship to date and those sponsoring the Super Eagles would prefer non-disclosure in their dealings! Enough of selfish businessmen and politicians meddling with sports development for personal gains!

In the long run, the Federal Government should demand NFF a mandate to develop Nigerian football through clearheaded policies and programmes that will identify and nurture talents from the grassroots. The springboard of that development is a viable school sport, talent hunting and self-sustaining local football leagues. The country is never in short supply of talents to nurture and promote to represent the country at all cadres and the senior national team.

Also, Nigerian coaches are good enough for our national teams if given the right exposure, free hands, and equal respect often accorded to foreign journeymen pretending as coaches, and supported to succeed. It is rare for national teams to dominate long enough without a fairly well-organised and managed domestic league that attracts talents from home and abroad. Nigerian football should be development-oriented not just to win laurels at all cost.

Like the proverbial fish that rots from the head downwards, the decline in Nigerian football and sports generally is symptomatic of an overall dip in national fortunes, sense of purpose and nationalism. Right now, what are the expectations of President Muhammadu Buhari from the Minister of Sport and Youth Development,

if the administration is so keen on nation-building? In turn, what are the Minister’s set targets for NFF and other sports federations? Indeed, the presidency and political elites should show better leadership, and standards and demand the same across the board. Right now, there is nothing excitable in the country and it is a shame on the government of ‘change’.