The Director-General, National Youth Service Corps (NYSC), Brigadier General Shuaibu Ibrahim, has said that the award given to him by the Sun Publishing Ltd will be a motivation and encouragement to do more.

General Ibrahim spoke when the management of the Sun Publishing Ltd led by the Managing Director and Editor-in-Chief, Onuoha Ukeh, presented the letter of Public Service award to him in Abuja last Monday.

Thanking the Sun Management for the honours accorded him, the NYSC boss commended the newspaper outfit for using its platform to publicise the activities of the scheme. 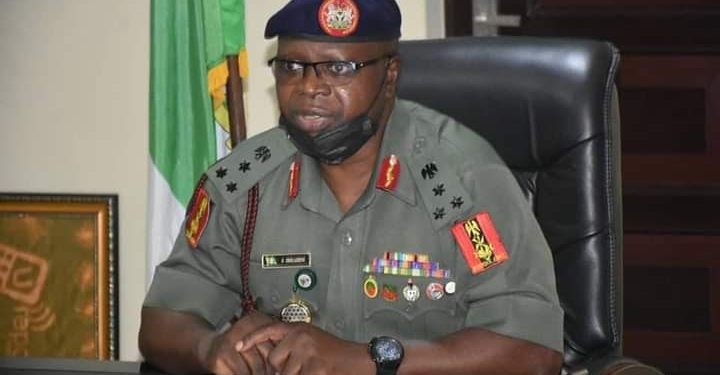 He specifically solicited the support of the outfit to join the campaign for the setting up of NYSC Trust Fund to help empower the corps members and equip the scheme more.

Responding after the presentation of the award, the DG said: ‘It is an honour to receive you and to be considered worthy of recognition for this award. I saw coming on board as the DG NYSC, as an honour because I am not the only qualified person but the Lord has chosen me.’

‘As I sleep and wake up, I think of death and what I will be remembered for and when God gave me this opportunity, I am always thinking of what legacy I will leave behind. This honorarium will further give me more courage and motivation to perform more.

‘We cannot thank the Sun newspaper enough for using the platform to educate Nigerians on how we operate because there are always misconceptions especially on the situation of COVID-19 in our orientation camps.

‘Some claimed that there are positive cases in our camps but your platform has continued to sensitise the public on the real situation. Before anyone enters our orientation camps, both the staff and prospective corps members are tested and anyone positive is taken away by the NCDC for treatment.

‘They are young people hence we never recorded any fatality. They only last between three to four days for treatment, recover, join others and continue to train with us. The partnership has even helped the NCDC and the Presidential Steering Committee on COVID-19 because corps members come from every part of Nigeria and the analysis on our operations on the pandemic help Nigerians on the need to go for test. All the thousands of corps members mobilised are compulsorily tested,” he noted.

Speaking earlier, the Managing Director, Ukeh, had chronicled the achievements of the NYSC DG since joining the Scheme, announcing that he merited the honour accorded him.

‘We are here to unveil the Director-General as the recipient of the Sun Award for Public Service. Before I state why this award is bestowed on him, I will give a brief history of Sun Award. It started in the year 2003, one year after the Sun was founded. It was instituted to honour Nigerians that have distinguished themselves in their different fields of endeavour.

‘The first recipient of the award then called the Sun Man of the Year was Globacom chairman, Otumba Mike Adenuga and Nuhu Ribadu, the then Chairman of EFCC followed him.

‘For last year, 2020, the DG was nominated and we examined what he has done for the Scheme especially for the year under consideration and he was chosen as winner for Sun Public Service award category. The reasons are obvious. Your selection is based on merit because of your outstanding achievements in piloting the affairs of the NYSC.

‘As the 18th DG of NYSC, you have made giant strides due to strict implementation of the Corps’ five-point policy thrust which include the effective utilization of the potentials of corps members for optimal benefits, strengthening existing collaboration with critical stakeholders, improving on the welfare and security of corps members and staff, pursuing a technologically-driven organisation to deepen effective service delivery and reinvigorating the NYSC Ventures and SAED in line with NYSC Act.

‘The presentation of the award will hold at the prestigious Sun Award ceremony scheduled for Lagos in October this year,’ he announced.