As a priest I was a concelebrant in the opening Holy Sacrifice of a-three-day spiritual revival crusade against evil forces. The preacher began by reading the Word of God that was ad rem to the occasion. A marathon homily followed. The climax was the prayer of exorcism.

The priest minister started binding and casting the evil forces within and outside. He was speaking and praying in tongues. The physical and spiritual atmosphere was charged. Power fell upon power. It was like a great storm blowing across. Many of the congregants began to fall like trees here and there. Some prayer warriors and stewards were all over the places controlling the fallen living bodies.

As the unseen forces were moving around, an altar boy in full regalia standing with us at the rostrum fell down with extraordinary force and was rolling unconsciously. As a precaution, I held the iron pillar beside me tightly in case the moving spirit tries to pull me down also.

If that happened, I would become an object of caricature because people would easily believe that I am possessed. Indeed, it is not a story to hear that a dog bit someone. But to hear that someone bit a dog rings bell in the town.

Where am I heading to? Christmas is the salvific and peaceful annual celebration of the commemoration of the Birthday of Our Lord and Saviour Jesus Christ on the 25th day of December. If the Incarnation did not take place, fallen humanity would have gone to blazes.

The night of the Nativity of the Saviour is popularly called Holy and Silent Night. Other nights have been noisy. The shepherds were amazed at what they saw on that night. Heaven descended on earth in flesh and blood. The Angels of God sang in exultation, “Glory to God in the highest, and on earth peace to men of goodwill!” Today the church choir sings, “O silent Night, holy Night. All is calm, all is bright. Round yon Virgin Mother and Holy Infant, so tender and mild; sleep in heavenly peace!”

Something that is silent is presumed to be peaceful. Yes, the King of Peace was born for us. In fact, if Jesus Christ was not born, I would have committed suicide because life would have been meaningless. But thank God the Saviour was born to sacrifice himself as ransom to restore sinful humanity on the path of salvation.

It is now clear that Christmas is a silent and peaceful celebration. It is neither noisy nor stormy in essence. The crayfish is a straight creature. Unfortunately it is bad weather that bent it. It is human factors that make this year’s Christmas stormy.

Christmas is the Mother of all birthdays. It is universal and unique. A certain mad man said that he would have preferred that Christmas be celebrated on different days, in different places so that he can eat and drink days without end. During my childhood days, rice was only eaten on Sundays and on Christmas Day. For us then, Christmas without rice was futile. 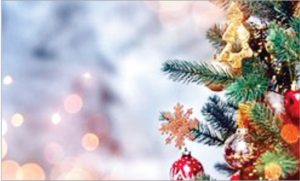 It was a taboo to cook yam or any other edible except rice on Christmas day. It was eaten morning, afternoon and night on that joyful day. This Christmas rice retains its value till today.

Regrettably the market cost of a bag of rice is beyond the reach of the common man this year 2022. Seven years ago, it was sold at eight thousand Naira. Currently it is above forty thousand Naira per bag.

This exorbitant price is a destructive storm for the ordinary people who make up 70% of the Nigerian populace. What can they do to eat rice on Christmas day this year? Even if they contribute money as a group to share one bag, the quantity will be like a cup of salt poured inside an ocean.

Few days ago, a married poor man with seven children came into a church in tears. He brought along bag of sand. He placed it before the altar of God and pleaded with the officiating priest to pray over it so that it can miraculously turn into a bag of rice. The priest told him frankly that he has not such miraculous power. The poor man broke down in tears.

With sorrowful heart he asked the priest, “Father, how then can I feed my tender and hungry children on Christmas day? Please ask God to turn this bag of sand into a bag of rice because he is the God of possibility.” Is this not a litmus test of faith? The priest was touched at heart at the plight of the poor man. He asked the poor man to see him after the ministration.

He waited hopefully that manner would fall from heaven. To cut the story short, the priest gave the poor man half bag of rice from the little he had. Has God not answered his prayer? Please let us share rice and other foodstuffs with the less privileged around us at this Christmas so that we can calm the storm of hunger and put smiles on hungry faces.

Insecurity of lives is another fatal storm which has been blowing across the country for some years now. This year seems to be the worst. Hence many people are afraid to travel home for Christmas celebration, especially by land. How many people can afford to travel by air? Even if they travel by air, they must eventually land and travel to their towns and villages by land. If witchcraft is possible, then many people will turn into witches and wizards in order to escape from the hands of bandits, terrorists, Fulani herdsmen, known and unknown gunmen.

Recently an anonymous individual circulated a fake viral insecurity text in Anambra State aimed at scaring Christmas returnees and play down the joy that accompanies the Yuletide. There is no cause for alarm. Anambra State is safer now security-wise; thanks to Governor Chukwuma Soludo and his security agency. God is on our side and will surely protect his people at Christmas.

However, we must be vigilant and prayerful as we go about during the Yuletide. Even during the first Christmas, there was insecurity. Herod threatened to kill the newly born King and Saviour at the manger. God instructed Joseph to take his wife Mary and the child that night and flee to Egypt. By God’s grace we shall escape from the enemies of progress, principalities and powers-that-be during the Yuletide.

As Christmas 2022 was approaching, the Central Bank of Nigeria (CBN) announced the introduction of N200, N500 and N1000 redesigned currencies. It took effect from 15 December and will terminate on 31 January 2023. Similarly, the spiritual storm blowing in our lives requires instant redesigning of our lives by change of heart.

Repentance from our sins paves way for the entrance of the Redeemer into our hearts. Good should be done while evil should be avoided. Love of God and neighbour is an effective instrument in curtailing the storm of hatred among us as we celebrate Christmas. We should reconcile with one another in the disputes dividing us in our families, villages, towns, states and nation.

We should vote for honest candidates and not for political parties. The best presidential candidate among the contenders should be voted into power, come February 2023, in order to save us Nigerians from the destructive political storm militating against our progress since Independence. Jesus Christ abhors vote buying or selling. By vote buying, we sell our consciences and delay our entrance into the Promised Land.

Rigging of election is a betrayal of our future well-being. As Jesus Christ calmed the storm against the boat in the sea, may he calm the political storm threatening Nigeria’s journey to the Promised Land. May injustice, tribalism, unfairness, marginalization, corruption, bad governance and instability starring us at the face banish by the power of the Incarnation of God’s Word among us. Merry Christmas and fruitful New Year 2023! See you then, if God permits.