The Management of Stella Maris Girls’ College, Abagana, Njikoka LGA, Anambra State,   has presented awards to over 33 persons for their contributions to the development of the College.

The awards which were in six categories included benefactors and benefactresses; golden award; diamond award; merit award, lovers of education and special service to humanity. They were presented to different individuals on Sunday, December 19, at the blessing of a hostel block donated to the College by Chief. Dr. Florence Nwakaego Nwako-Oraelosi.

The event also featured the blessing of Chemistry and Biology Laboratories, as well as Physics Laboratory equipped by Engr. Emma Ezekwe and Physics Laboratory financed by Mr. Ikechukwu Akanisi, by the Bishop Elect of Nnewi Diocese Most Rev. Jonas Benson Okoye.

Fides gathered that the Biology laboratory, aided and equipped by Engr. Emma Ezekwe, was carried out in memory of the late Mrs. Ukweaku Odili while the Chemistry Laboratory was dedicated to Mrs. Beatrice Iruka Ezekwe. The Physics Laboratory was however financed by Mr. Ikechukwu Akanisi. 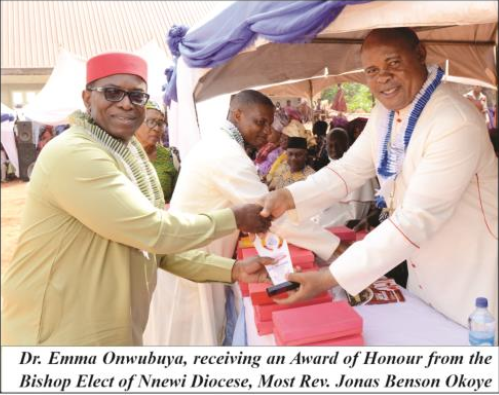 Speaking on the motive behind the awards, the Manager of the College, Rev. Fr. Augustine Oguine, explained that the award was to appreciate and recognize those who had made great sacrifices towards the development of the College. He said the College had enjoyed the good will and assistance of people even when they were still at a crossroads.

Through his address of welcome, Fr. Oguine appreciated the Abagana Central Catholic Pastoral Council whose initiative gave birth to the College, and members of League of Friends and Associates for Human Development (LOFAHD), for donating ten computers to the college. He said that the Father of the Day, Chief Sir Tony Anaekwe, had been very supportive to the College and that his contributions when the College was at a crossroads, earned him the ‘College’s Pillar’. He Commended Dr. Florence Nwako-Oraelosi for taking up the hostel project and said that the structure would enable the College to commence its boarding programme to avail people from far the opportunity of attending the College. On the achievements attained by the College, he disclosed that the College had been growing in all spheres as it had completed its academic block, a three-storey building from lintel level and had erected the second building. He said that the Biology, Chemistry and Physics Laboratories came to reality through the financial contributions of Engr. Emma Ezekwe, Mr. Ikechukwu Akanisi and Mr. Uche Agudosi.

He said that since the inception of the College in 2012, none of the students had gone for a BECE re-seat examination nor had anyone failed any subject in NECO and WAEC examinations.

On the side of character formation, Fr. Oguine noted that discipline had been fundamental to their educational programme as the administration had never relented in ensuring high disciplinary standards and moral probity in the life of her students, saying that they observed zero tolerance for indiscipline and unruly behaviour.

Receiving her Diamond award, the donor of the hostel block, Chief Dr. Florence Nwakaego Nwako-Oraelosi, reaffirmed her commitment to humanitarian projects and promised to carry out more projects in the College. She said that assisting the priest in charge at the College was geared at enabling the students to actualize their dreams and aspirations.

For his part, Dr. Emma Onwubuya, a cardiologist with Crest Hospital, Awka, who was decorated with a Special Service to Humanity Award, said that the education project was something that must be done for the College to succeed, calling on all persons who had the means and capacity to assist the College to attain the standard which they hoped for. He recalled how difficult it was for him to finance his education and said he was ready to assist others.

Dr. Onwubuya, who took up the financing of the College’s borehole project, said water was very essential for the survival of the students that would reside in the hostel, especially in maintaining the sanitary situation.