While baring his mind on the trending issue of a possible amendment of the country’s constitution to allow governors have their own police, a former governor of Benue State, Gabriel Suswan, said, ‘Even as a sitting governor, I opposed it because I knew that most of us do not have the maturity to control state police. The proposal in the constitution amendment is that governors will appoint commissioners of police. I will not be a party to that. I know the implications of that; that will be a recipe for the complete disintegration of the country, except we want that  .

‘As governor, if I have state police, there is no way you will come into that state and misbehave that I won’t charge you for nuisance and put you in jail and when it comes to election, you know that I will appoint the commissioner of police; my mother can be commissioner of police, my cousins will be the DPOs here and there, and my lackeys will hold other positions such that anywhere somebody is my opponent politically, that person is gone,’ he said. 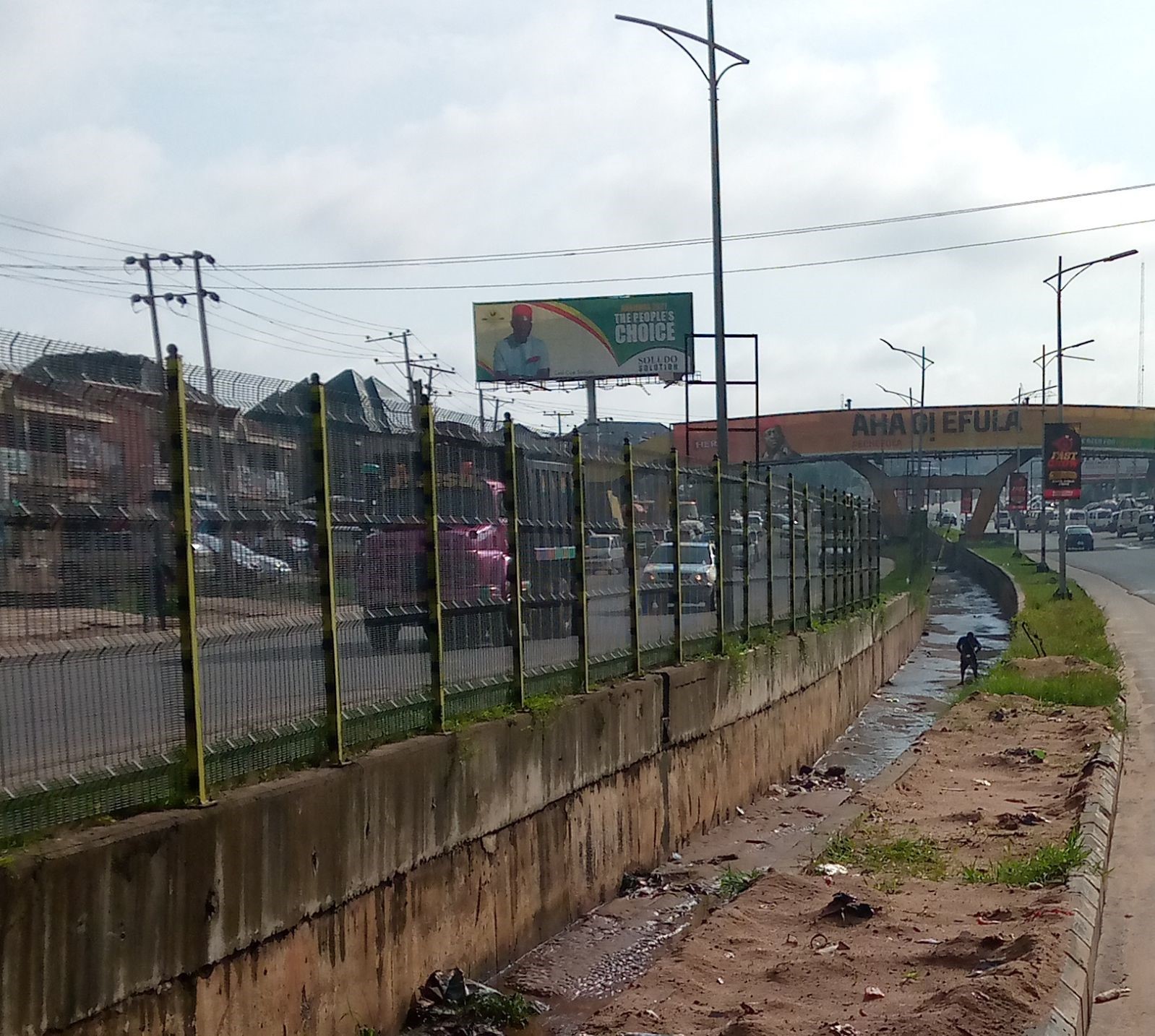 This young man was captured openly defecating in the gutter between both lanes of the Awka/Onitsha Express Way. People like these have no business staying outside their villages

Indeed the issue in question has been eliciting different responses, with serving governors mostly favouring the idea and past governors opposing it. I will however like to align myself with the views of the naysayers; that is, those opposed to the state police idea for the simple reason that we have not shown proof that we are mature enough politically to have such.

The fears raised by the former Benue State governor are real. Yes, he might not be saying this if he were still in office as governor. Yes, today’s governors who welcome the idea may not say the same thing tomorrow when they leave office. So why don’t we look for the views of those who have neither been past governors nor serving governors?

For sure, based on the happenings in the country today, the need for state controlled police is necessary. At least, had there been state police, the activities of the murderous herdsmen would have been curtailed if not minimized. That, in itself, would have been one hell of an achievement. But that is pretty much as far as it goes.

We live in a clime where those in power abuse that power. They preach and sermonize while outside the power corridors but once they get inside, they enter the bandwagon of oppressors. We recently had the former labour leader, Adams Oshiomhole, as a perfect example. I don’t think the country ever had a better and most vociferous labour leader before Oshiomwhole. He was respected and admired by many who saw him as uncompromisable, dogged, committed and passionate.

When he gunned for political office to be governor of Edo State, many; including workers, of course, welcomed the idea and supported him. The workers of Edo State must have seen him as a godsend. But, alas, when he mounted the saddle, he not only behaved like the rest, but did to workers what others before him had done to them. Outside office as governor, he became the national chairman of the ruling party at the federal level. But it was there we all saw his worst side and he was ignominiously eased out.

To date, there have not been any local government elections that are won by the opposition parties. It is almost always a hundred per cent return for the party in power. Yet, these are same governors who berate the national electoral body for not conducting free and fair polls. Conversely, the only elections that have been largely fair are national elections; that is elections conducted by the Independent National Electoral Commission, INEC.

So if the state governors can muddle up such state elections without giving the opposition a chance, who says they cannot do same when they control their own police? Who says they cannot use same police to hound and harass the opposition parties and members? Can the opposition party members be guaranteed of adequate police protection after continually criticizing the party in power? I don’t think any unbiased mind can say no to these posers. It is not going to be possible because that’s the way we have come to be. For all we know, we may come to have maximum rulers who will suddenly become overlords in their states.

I’ll rather prefer that the present arrangement remains but with marked improvements.

Must we all live in the Townships?I’ve often wondered what many people are doing in the townships where they live like animals. Or how do you explain people who ”live” in townships but have no home? They sleep anywhere they find and do not enjoy the luxury of good baths, if they bathe at all. They also relieve themselves anywhere the need catches them. For the few that have somewhere to place their heads, many of such places have no toilet facilities, meaning that they also defecate anywhere. So if it comes to a situation where a human being stays in a place where he has no assured shelter and cannot bathe and relieve himself in a decent place, what is that breathing being doing there?

You see, we have this rather fixated idea that one can only be somebody outside one’s land. This is why many young men have sold their property to travel abroad to ”hustle” as though they cannot hustle here. In going abroad (which can be any place away from their homeland) they may be subjected to all manner indignities and hardships. They swallow them because they have no choice. Sometimes, those people are no better than those they left behind and sometimes too, shame does not allow them to return home to make amends and start life afresh.

However, I’ve come across some young men and women who are changing that narrative. These people stay here and hustle legitimately and eventually make it. Last Wednesday, I came across two such young men and one young woman at different locations in Awka. The two young men do business along Zik Avenue. One makes buns and the other makes popcorns. They enjoy huge custom from people who buy wholesale from them, while they retail same at their places. I also came across a young woman along Secretariat Road, Awka. She packages nylon bags and sells them.

I’ve also come across young women who work with Anambra State Waste Management Agency, ASWAMA. They work in filthy environments and evacuate other people’s waste. But they are proud of what they do and earn their living from that. I doff my hat for these people as they are worthy examples to those who think there is no way here.

Food everywhere but none to eat

Almost everywhere you look at, you see the food is ready sign. But beyond that, whatever you see when you enter those places is what I cannot guarantee you. This lack of faith typifies the deteriorating cooking skills of today’s women who many prefer to call the Indomie Generation. Before now, one used to think that the easiest thing to prepare was stew. But today it appears to be the most difficult. You can barely find any kitchen outside your home where the stew is top notch. Most of the time it tastes like an admixture of tomatoes and water. When I see people who eat at those places with apparent non-concern, I wonder what has happened to their palate. But I have come to the realization that what the eye doesn’t see, the heart doesn’t grieve about.

What do I mean? Many of today’s people have no privilege of eating the original mama’s food. They have thus come to see what they are offered today as the norm. But for those who have tasted what obtained yesterday and today, they always shake their heads in disappointment any time they taste what these supposed professional cooks have on offer.

This is why anywhere you see a woman who cooks well, people flood there and fall over themselves to be given a treat. The funny aspect of it is that at those joints you struggle with women to get served. These are women who are supposed to be cooking their own food at home. But then again, how many can cook those local delicacies like bitter leaf and ora to the satisfaction of others and even to theirs?

In the days of yore, it was almost an abomination to see women eat at hotels/restaurants. Those who did, did so surreptitiously, with others staring at them as though they dropped from Mars.

At social events like weddings, traditional marriages and funerals, what is served, especially jollof rice, seems like just a mixture of oil and rice. Even the salad is dry. I’ve even eaten chicken prepared by a hotelier that still contained fresh blood despite being cooked.

Now, is it that our today’s woman is too impatient to cook well or is it that she did not learn how to cook from her mother? Whatever the reason, we may not know, but the situation remains that food is everywhere but none to eat. A sad commentary, isn’t it?