Some gender based groups, Women Aid Collective (WACOL) and Fifty-Fifty Action Women have called for an end to gender based violence and harmful cultural practices against women in Anambra State.

In a town hall meeting sponsored by Ford Foundation, which was held in Awka, the Anambra State capital, the groups decried the high rate of domestic violence in society, including harmful cultural practices targeted at women in society.

Coordinator of WACOL, Prof Joy Ezeilo, who was represented by Egodi Igwe in an address of welcome, said the essence of the town hall meeting was to seek the help of various groups in society to end harmful practices against women.

She said: ‘Cultural practices against women is rising in Anambra. We are here for interaction to see how these can be stopped. 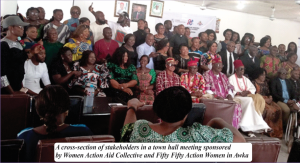 ‘We have various members of society here, including traditional rulers, town union presidents, youth leaders, women’s leaders and many others. We are here to hear everyone’s experience and see how we can stop them.’

Ikpeze in her presentation said; ‘The VAPP (Violence Against People Prohibition) Law is fully operational in Anambra today. As I speak with you, the special offences court is operating in Anambra, and always sitting.

‘I urge you to run away from imprisonment as a result of engaging in violence. The court is fully operational, you may be lucky to get away with a fine if you are brought before the court, but you have to know that once you pay a fine, you’re an ex-convict and this may deny you a lot of things, so you must be careful.’

Several groups also gave suggestions on how such harmful practices against women could be stopped, and ways they could help to stop such practices in their various localities.

The traditional ruler of Akweze Community, HRH Igwe Christopher Okpala, pledged to continually fight against gender based violence in his community, stating that under his watch, several widows had found justice in areas of cultural practices that they deemed harmful.