The maiden Annual Quiz Competition organized by the League of Achalla Graduates (LAGs) for government accredited schools in Achalla, has ended with St Paul’s Academy Achalla, Awka North LGA, Anambra State, lifting the first position trophies and cash prizes for both the junior secondary and primary school categories. The participating students for the junior secondary school category went home with a cash prize of N60, 000, while the pupils for the primary school category smiled home with a cash award of N45, 000. 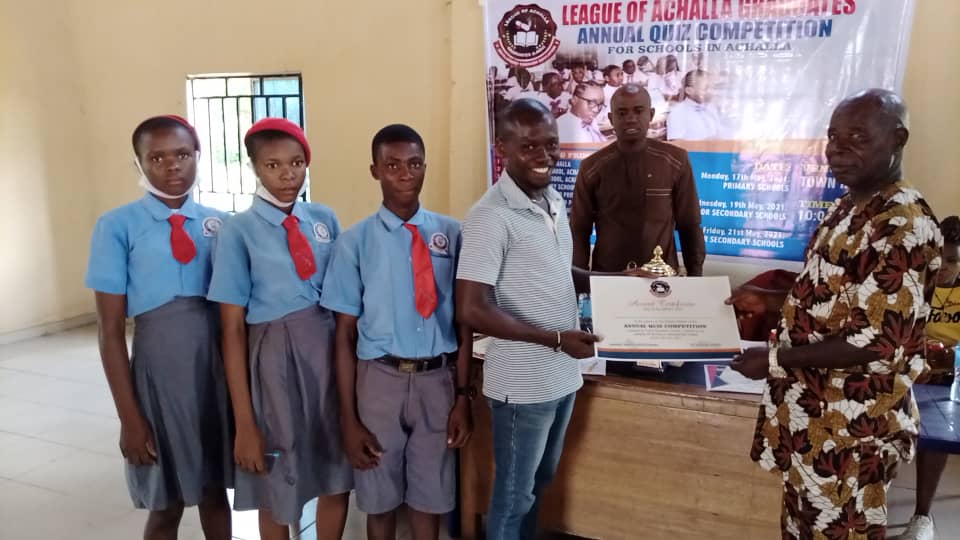 L-R: Chinenye Madubuko, Makuo Uyanwa and Chisom Elias (the three students that represented St Paul’s Academy in the quiz competition for the junior secondary category with one of the teachers, Mr Macdonald Obilor, receiving their certificate and trophy from the organisers, Achalla Civic Centre, May 19, 2021.

Baring his mind on the development, the Manager/Principal, St Paul’s Academy, Achalla, Rev Fr Charles Ezeugwa, described the win as an added feat to the school which in 2017 won the post of a Deputy Speaker for Anambra State Children’s Parliament.

Rev Fr Ezeugwa, who said he was overwhelmed with the performance of the pupils and the students, which, he said, had turned to be the talk of the town, congratulated them for making the school proud. According to him, their success in the quiz competitions was an indication that their efforts as teachers and formators were not in vain.

The manager/principal added that the success records of the students and the pupils had encouraged him to continue with the vocation of proper formation of the young ones.

In their various speeches to Fides, two of the students, Chisom Emmanuel Elias and Makuo Jacinta Uyanwa, both of JSS 3, expressed delight over the opportunity to have represented their school in the competition. The students promised to put in their best to excel in the May 29, 2021 debate competition that will be organized by Ven Foundation.

Fides gathered that the quiz competition was one of the annual education activities of the League of Achalla Graduates (LAGs), an umbrella of indigenous higher institution graduates of the town, to motivate the students to attach seriousness to their studies, as well as to become productive members of society.

According to the invitation for participation in the quiz competition signed by the President of LAGs, Mr Magnus Nnaekwue, and the Chairman, Education Committee, LAGs, Dr Felix Nwarienne, and made available to schools, the various annual competitions were part of the association’s contributions in correcting societal ills in the town and contributing to human capital development through education.

To sustain human capital development, LAGs, resolved to organize an annual quiz competition and debate competition with cash awards and prizes for schools in Achalla, as well as awards for best graduating students in each of the classes across the schools.