Fr Ezeh who spoke to Fides team of Ifeoma Ezenyilimba and Chioma Ndife, last Wednesday, as part of Fides’ focus on parishes within Awka Diocese, said the parish, in line with her emphasis on human welfare and development, had been uplifting the poor through her charity project. 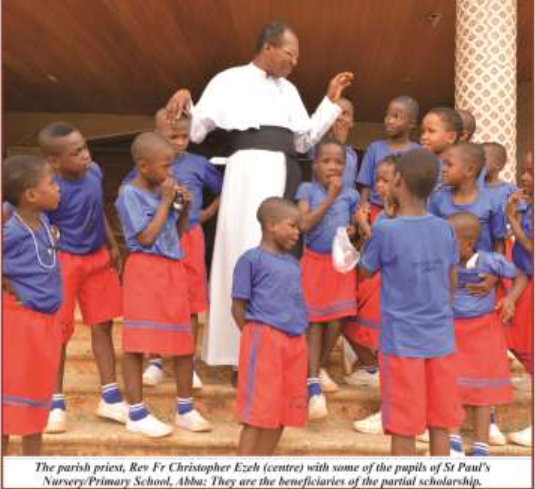 Fr Ezeh, who said he was eleven months old as the Parish Priest, explained that he had on arrival, improved on the Charity Sunday Project which the parish earlier had. According to him, the Charity Sunday which the parish organized every First Sunday of the month during which people donated cash and gift items for the poor, had been improved on, such that the wealthy members of the parish picked each of the twelve months of the year and in each of the month gave a minimum donation of N300, 000 for the wellbeing of the poor.

The parish priest thanked God that people complied to the monthly donation, saying that some even donated more. He said that the woman who picked the month of April donated N350, 000, while the two people who took the months of June and December gave N500, 000 each. Chief Cosmas Agagbo (Okpokaji) of Abba, according to Fr Ezeh, picked three months and paid N900, 000.

‘In addition to the donations from the parishioners, cash and material donations given by people in parishes where I preach at retreats are also added to the charity project,’ the priest said, noting that material things, such as clothing and other items which people did not use for six months and above, belonged to the poor.

On what the parish had been uplifting the wellbeing of the poor with, the parish priest explained that the parish often bought food stuffs, such as rice, tubers of yam and beans; which, in addition with the cash of N500, were distributed to each of the poor persons at the parish every Tuesday 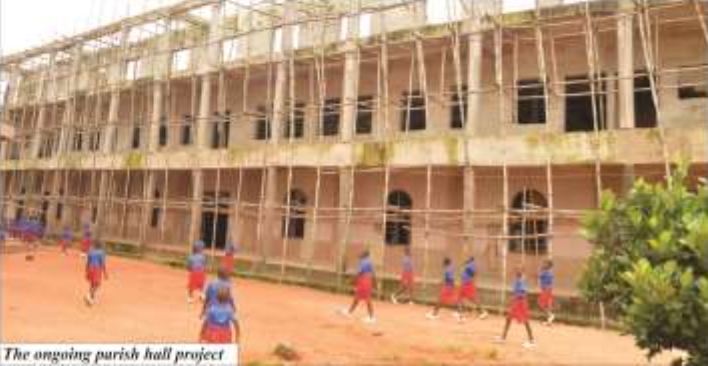 He added that the parish had also been paying hospital bills and house rents for the poor, as well as repairing roofs for the poor who had leaking roofs. He also said the parish had been giving monetary support to those in need of funds for their businesses, while supporting many poor people in the payment of their children’s school fees.

He cited the case of the immediate retired catechist of the parish whose hospital bill of about N700, 000 was paid, as one of the recent beneficiaries of the charity largesse.

The parish priest disclosed that venturing into farm plantation and employing the services of people to plant and harvest food produce for the poor were some of the plans which the parish hoped to put in place to sustain the charity project. 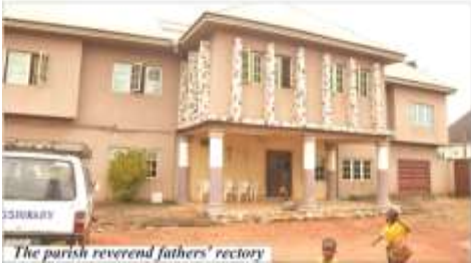 Fr Ezeh noted that in addition to feeding the poor, the parish also had scholarship schemes for poor schoolchildren. He revealed that two parishioners had given partial scholarships to some pupils of St Paul’s Nursery/Primary School, Abba. According to him, one of the sponsors picked 50 children, while the other picked 10 children.

He noted that in addition to ensuring that the pupils got quality education, the parish had also increased the salary of the teachers to enable them to meet up with the necessary needs and survive in the current difficult situation in the country.

Fr Ezeh identified parish crusades, monthly and weekly charity projects, youth programmes, Saturday Block Rosary crusade activities in the parish and on the streets, Friday adorations; as well as Tuesday office and counseling, plus daily confessions, as some of the spiritual activities keeping the parish going.

The priest noted that the parish also had a group known as the Angelic Prayer Warriors of St Paul’s Parish which he initiated. He said the group prayed for the parish and engaged in other spiritual activities, both within and outside the town

According to him, many people who were not in communion with the Church, and others who were into paganism, returned to the sacrament after the crusade, which, he said, featured Eucharistic adoration, Holy Masses, confessions, rosary processions and village outreach.

He listed some of their achievements as the successful charity project infrastructural growth; such as the completed church building, parish rectory and chapel, the ongoing parish hall project, the growing school, the completed church building and the ongoing rectory for the out station which was donated by a parishioner, Mr Emmanuel Aniakor; as well as active participation of the parishioners in all parish activities, among others. St Paul’s Parish, created in 1990, and has 9, 104 parishioners as at Sept 11, 2021.

Rev Ezeh, who said no parishioner had kicked against the charity project.

In an interview with Fides, the head teacher of St Paul’s Nursery/Primary School, Abba, Lady Dorothy Nwafor, corroborated the view of the parish priest on the growth of the parish. According to her, some people who had abandoned the Catholic faith returned to the sacrament, while some pagans were converted to the Catholic faith.

Lady Nwafor, who is also a parishioner of the parish, said people had been donating to the charity project and participating in activities voluntarily.

She identified paganism as a major challenge which had been affecting the parish, and called for sustained collaboration so as to convert more souls, especially the youths, who, according to her, abandoned the faith for paganism.

Master Akpaka, who is a student of ArchAngel Secondary School, Ifitedunu, advocated for intensified catechesis and counseling to bring back the youths to the Catholic faith.