To promote and sustain healthy competition among students, the Management of St. Patrick’s College, Awka, has increased the College’s pass mark from 50 to 55, noting that students who fail to attain the mark will be asked to repeat.

The Manager of the College, Rev. Fr. Celestine Anaekwe, made the disclosure at St. Patrick’s Cathedral, Awka, during the Holy Mass that was used to commence the activities of the final term for the 2021/2022 academic session.

The College at the Mass received the new Commissioner for Education in Anambra State, Prof. Ngozi Theresa Chuma-Udeh, who joined the College in handing over the academic activities to God to pilot the affairs of both teachers and students for a resounding academic session.

Fr. Anaekwe said the increase was to ensure that the students devoted more time to their academic work and excel better even as he acknowledged that the laurels which the school had received were as a result of their academic excellence. 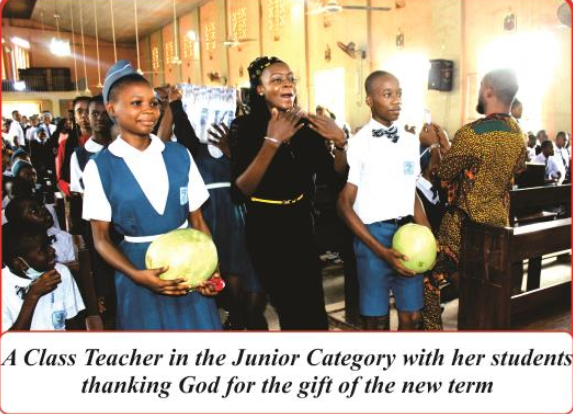 Addressing the students after a citation on her personality which was presented by two students, Prof. Ngozi Theresa Chuma-Udeh said that the visit brought memories of her days as a student, saying that she took pride in Catholic education which she received during her formative days and was greatly humbled being a Catholic.

She disclosed that she shared a common faith with the students and stressed the benefits which the students would derive from regular attendance of Holy Masses, noting that it shaped her future personality. She pledged to be a member of the College and affirmed her commitment towards assisting the students attain their life potentials.

For his part, an Academic don from Nnamdi Azikiwe University, Awka, Rev. Fr. Emmanuel Umezinwa, praised the academic prowess of the students and urged the Management to sustain what they had been doing which brought about great academic excellence within the college in just 7 years of its establishment. He expressed the conviction that the College woud produce students that would not only fit into society but shape it.

Fr. Umezinwa who marveled at the progress of the College in all spheres of life, commended the neat state of not just the school environment but also the students and noted that the activities which the College had embedded into the school curriculum would assist the students prepare for life and not just passing exams. He advised the students to ensure effective time management.

Fr. Umezinwa likened the students as shining stars and expressed the conviction that the school would help them to discover themselves, urging them to bear in mind that life was not about comparisons or competition, saying that each individual was different. He beckoned on the school counselor to assist the students to disclose that which they would do in life happily.

Earlier in his homily, Fr. Umezinwa explained that the human body was made up of four components and maintained that it was important for them to develop all the four components effectively. He charged them to maintain their cool, even when the future looked bleak.