Business and commercial activities at the area of St Patrick’s Catholic Cathedral, Awka, were grounded last Tuesday, December 7, as two priests of the diocese were committed to mother earth.

Fides reports that the three schools within the cathedral premises, the bishop’s and the parish priest’s Tuesday Offices, business activities and the ongoing Catholic Charismatic Renewal crusade, were all shut down, in honour of the late cathedral administrator.

Fides also gathered that the demise of the late Fr Attansey was the first time a serving cathedral administrator and a serving episcopal vicar of the diocese died in the history of the 44-year old Catholic Diocese of Awka.

A native of Isuaniocha, Awka North LGA, Anambra State, the late Rev Fr Matthew Attansey, was ordained a Catholic priest on June 30, 1979, by the  late Most Rev Albert K. Obiefuna. He was the first indigenous priest of Isuaniocha and died at the age of 73 years on October 1, 2021. 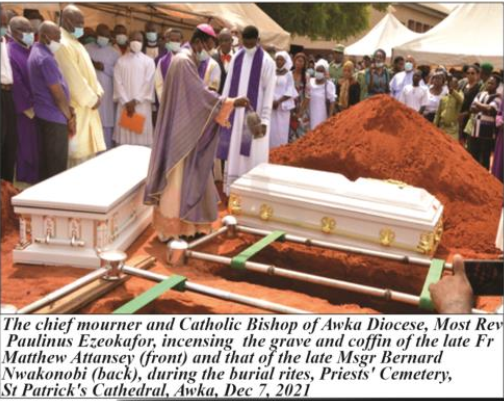 Fondly known as Odirachukwumma, the late cathedral administrator died in a hospital while on his annual vacation in Atlanta, USA, and after his 42 years a Catholic priest. A former president general of Isuaniocha Town Union, the late Fr Attansey, who was on a mission in the USA 1998-2013, and became the administrator in 2016, also served as a Deputy Director I of Fides Media Ltd, 2013-2016. He was also the chaplain of Knights of St Mulumba, Onitsha Metropolitan Council.

The priest who died at the age of 74 on October 3, 2021, and after five years of sickness, was from 2020 till his death, a priest in-residence at St Joseph’s Parish, MaryLand, Amawbia. He spent 43 years in the Catholic priesthood.

Leading in the concelebrated burial Mass for the two late priests at St Patrick’s Cathedral, Awka, the chief mourner and Catholic Bishop of Awka Diocese, Most Rev Paulinus Ezeokafor, thanked God for what  he achieved through them in the Church and in society.

The Catholic prelate prayed God to, through the prayers and sacrifices of the mammoth faithful who graced the burial Mass, as well as attended the previous requiem masses, grant the late Catholic priests eternal rest in heaven.

Most Rev Ezeokafor condoled with the bereaved families and Catholic communities and appreciated Awka Diocesan priests in the USA and Lagos, who, he said, brought the remains of the late Fr Attansey home for burial, for their sacrifices.

In his homily, Rev Fr Peter Obiefuna described the death of the two priests as a reminder that an individual could die at any time, in any place and any circumstance.

He called on the living to spend their lives in anticipation of death, which, he said, could come at an hour they did not know and learn to summarize their lives at any point in time.

Pointing out that tomorrow did not belong to anyone, the homilist charged the living on adequate preparation for death through total repentance, constant reception of the Sacrament of Penance; life of peace, truth, love and justice, as well as prompt payment of workers’ salaries by those in places of authority.

‘Do what you are supposed to do today, and do not postpone to tomorrow. Do all you can when you can and how you can for the time shall come when you cannot,’ Fr Obiefuna advised the living.

Awka Diocesan Presbyterium in a funeral oration that was signed and read by the Secretary, Rev Fr Dr Evaristus Ifeanacho, regretted that the demise of the duo ended the earthly life of two priests who were numbers 14 and 15 in the chronological record of Awka Diocesan priests.

The presbyterium in the oration, eulogised the deceased priests as those who laboured tirelessly in the Lord’s vineyard.

Known for his hobbies of photography, gardening, fishing and hunting, the late Fr Attansey was said to have shown visible signs for the love of God, was selfless, sociable and ready to assist people in need.

The late Msgr Nwakonobi, with photography and reading as his hobbies, was said to be a very organized and a zealous priest, as well as an intelligent and good teacher.

St Patrick’s Cathedral Parish, Awka, in a funeral oration that was signed by the Assistant Cathedral Administrator, Rev Fr Paschal Udo and the Secretary of the Pastoral Council, Dr Chinwe Agwoile, described the death of the administrator as devastating and one death too many.

The Cathedral parish commended Fr Odirachukwumma’s commitment to peace and brotherly love, describing him as a priest, counselor and hunter who was charitable and a peace maker.