Tributes filled the air recently at St Matthew’s Catholic Church, Amawbia, Awka South LGA, Anambra State, as the parish celebrated the life and times of the late Miss Oluchi Juliana Eneje, who was a typist of St Matthew’s Parish, Amawbia for over two decades.

Speaking at the requiem Mass in honour of the deceased at St Matthew’s Amawbia on Tuesday, January 18, the parish priest, Rev Fr Michael Onwukike, described the late Miss Eneje as an asset to the parish, saying that the deceased was committed to her duties for the many years she served the parish as a typist.

Rev. Fr. Mike Onwukike, who emphasized the need for being good and doing good at all times, commended the late Miss Oluchi Eneje for what he described as her rare virtues of goodness.

He expressed the conviction that the deceased who suffered health challenges for years, and served the Church and humanity diligently and relentlessly, was resting in the Lord.

The parish priest appreciated the Parish Pastoral Council of the parish for the support, which, he said, the Council and the members gave to the late typist during her period of sickness. He prayed God to grant the soul of the deceased eternal rest in heaven. 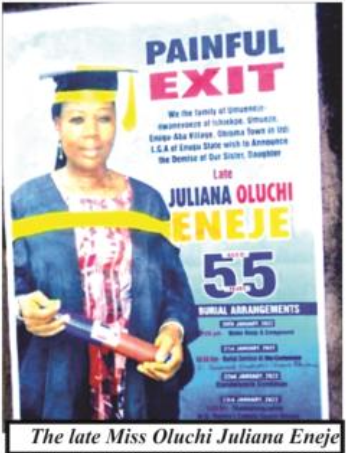 In his homily of the January 18, 2022 requiem Mass, a former parish priest of St Matthew’s Parish, Amawbia, Rev Fr Valentine Nnachebem Ofomata, noted that the demise of the late Oluchi Eneje was a big blow to the Church. According to Fr Ofomata, the deceased was a devout Christian, who served the Church with dignity, dedication, great understanding, wisdom and tenacity.

‘The late Oluchi Eneje was an asset and a great blessing to St. Matthew’s Parish, Amawbia. She was a hardworking fellow who had the interest of parishioners at heart, and demonstrated great love for her job such that she did not give up even during the period of her sickness. Eneje was humble, indefatigable, dedicated, zealous; ready to take corrections and above all, was prayerful,’ Fr Ofomata said.

He continued, ‘The deceased was very realistic and optimistic in all her dealings with people. As testified by many people, the late Eneje spent her life in anticipation of heaven.’

Explaining that the late Eneje went back to God, her creator, after a protracted illness, which, he said, also prepared her for heavenly inheritance, Fr Ofomata prayed God to fill the vacuum which her demise created at St Matthew’s Parish.

The homilist urged all to learn from the life lived by the late Eneje, who, according to him, had deep relationship with God and had thirst for heavenly inheritance.

Pointing out that death was a divine call and a necessary end which awaited every person, Fr Ofomata urged the living to be embodiments of life that was worthy of their calling as people of God. Such disposition, according to him, would enable all to be prepared for and answer the call of death worthily.

The late Miss Eneje, who died in December 2021, was aged 55. She was until her death, a typist of St Matthew’s Parish, Amawbia, as well as a devout member of Apostleship League of the Sacred Heart, Divine Mercy, Sisters of the Holy Spirit and Purgatorian Societies of the Church.