Six students of the Catholic Diocese of Awka-owned St Lucy Secondary School, Ifite, Awka, Awka South LGA, Anambra State, who distinguished in academics, have been awarded with partial scholarships by the School Management.

Announcing the award at the First Parent Teacher Association (PTA) Meeting of the School for the 2022 held on Wednesday, February 9, the School Manager/Principal, Rev Fr Jude Nwokolo, said the six students, emerged the overall best in their various classes for the First Term of the 2021/2022 Academic Session.

Fr Nwokolo congratulated the students for according to him distinguishing themselves as academic champions, and urged them not to rest on their oars.

He announced that the partial scholarship to each of the students would cover part of their tuition fees for the Second Term of the  2021/2022 Academic Session.

The manager/principal, who stressed the need for students to devote more time to academics and learning of skills, and less time to watching cartoons and films said, ‘Parents, do not allow your children and wards to spend most of their times watching television.

I wonder why some parents still allow their children who are secondary students, to be engrossed in watching cartoons which they have been watching from when they were babies. Children should devote time to their academics and other things that will help them to grow positively, and not to, watching cartoons’.

Pointing out that St Lucy Secondary School, Ifite, Awka was committed to its goal of academic and moral excellence, Fr Nwokolo urged the students to dispose themselves to learning discipline.

He announced that the partial scholarship award to the best would henceforth be a termly routine of the school.

This was even as he stated that any student who emerged the overall best in the first and the second terms, would get a full tuition scholarship in the third term. While those that failed promotion exams would repeat the class they failed, any student that failed the promotion exam of a particular class twice would be dismissed. 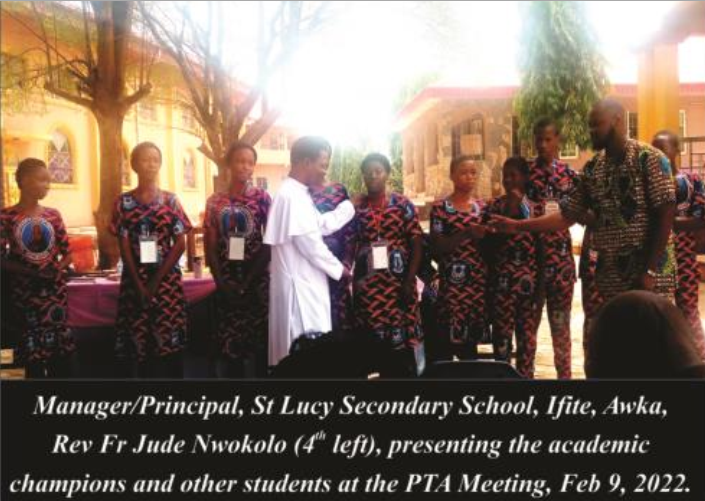 Fr Nwokolo explained that the scholarship award was to encourage students to work hard and devote time to their academics.

Fides gathered that the six students who were awarded the partial scholarship were Sylvania Chigozie Nzewi of JSS1, 89.9%; Festa Chetachukwu Izuorah of JSS 2, 92.2% and Chinanuekpere Agbodike Amaechi of JSS 3, 92.8%.