Twenty one years after the creation of the parish, the Catholic Bishop of Awka Diocese, Most Rev Paulinus Ezeokafor, in a well-attended ceremony last Sunday, October 17 (Mission Sunday), dedicated the beautifully finished St Kevin’s Catholic Church, Nimo, Njikoka LGA, Anambra State, to be a solemn place of prayer and worship for God.

In his homily, the bishop described church dedication as a great solemnity which would be commemorated annually by the parish on October 17 of every year. 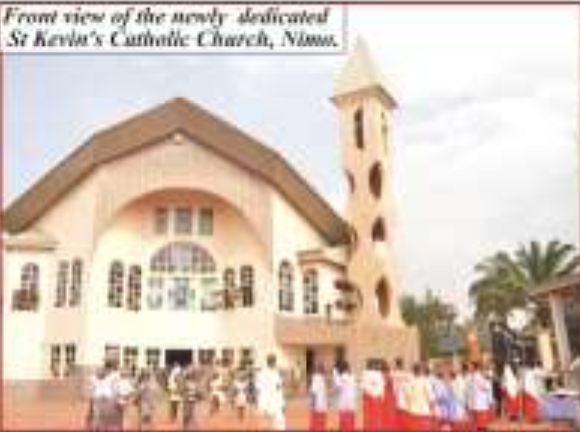 Pointing out that the bodies of the people of God were temples of the Holy Spirit, the Catholic prelate, who based his reflections on the opening prayers for the dedication Mass, encouraged them to be embodiments of lives that bore true witness to Christ.  According to him, inasmuch as the physical life was necessary, it was important that people gave proper attention to their spiritual life.

The bishop, who agreed that God was everywhere, noted that a church building was a place set aside for prayer and worship, where the faithful would encounter, pray to and dialogue with God.

He thanked God that the parish had basic structures that showed its readiness for dedication, which included a podium for social activities, chapel and grotto for private prayers, the fathers’ rectory for shelter and the church building for worship.

The Catholic prelate advised against social activities, such as meetings, reading of newspapers and phone calls, as well as anything mundane, in the dedicated church.

Most Rev Ezeokafor commended the parish priest, Rev Fr Mac Ben Okeke, and other priests that had served in the parish, as well as all who donated in support of the church projects for their sacrifices and donations. He prayed that their sacrifices would lead them to heaven.

In his address of welcome, the Vice Chairman, Parish Pastoral Council and Chairman, Dedication Committee, Professor Sylvanus Anigbogu, thanked God that a befitting place of worship which St Kevin’s Parish had labored for since 2000 it was created, became a reality in 2021.

Fides gathered that the parish at the event honoured her former parish priests and some of her major donors as her pillars. Among those honoured were Engr Cyril Ajagu, Engr Peter Atupulazi, Sir Charles Atakulu, Hon George Ozodinobi and Chief Linus Okeke, as diamond awardees.