…As Celebrant Splashes 5M for Empowerment of 35 Skilled Persons

St. Joseph’s parish, Umuawulu on Monday, August 1, joined others, both indigenes of the community and beyond, to celebrate the birthday anniversary of their benefactor and sole sponsor of the Church Construction project at the outstation, High Chief Christopher Ndubuisi. 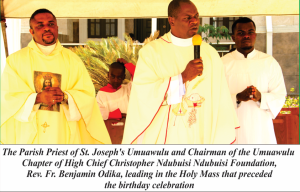 In celebration of his birthday anniversary, the celebrant through his foundation, High Chief Christopher Ndubuisi Foundation, donated over 5 million Naira for the empowerment of over 35 skilled indigenes of the community.

Leading in the Eucharistic celebration, the Chairman of the Umuawulu Chapter of the Foundation, Rev. Fr. Benjamin Odika, thanked the celebrant for his generosity and noted that the day’s celebration was for them to join their brother to thank God for adding another year to him and to appreciate him for using his resources to empower others in actualizing their dreams and potentials.

‘This act of his is in support of diligence and encouragement of hard work,’ he noted.

He stressed the importance of starting small and called on the recipients of the empowerment tools to bear in mind that everyone’s talent was different.

In his address, Fr. Odika, disclosed that the foundation came on board in December 2021 with the aim of structuralizing the philanthropy of the founder that had been variously applied in areas like award of scholarships, empowerment of youths, payment of hospital bills, construction of homes for the destitute among others, over the years, in order to ensure equitable and judicious applications to most deserving beneficiaries. 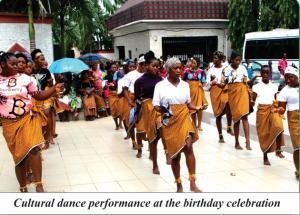 He revealed that the Umuawulu Chapter of the Foundation had received 405 applications after the initial announcement, noting that only 227 persons returned their application. He noted that after series of rigorous interviews, only 35 applicants scaled through.

He urged the celebrants to remember that litigation awaited those who failed to commence their venture 30 days after the empowerment scheme, saying that funds for payment of shops for those who required them for their immediate takeoff were available, while those for bakery would receive their ovens within the next week as it was under construction in line with specification of the beneficiaries.

Speaking at the celebration, the Father of the celebrant, Chief John Ndubuisi, appreciated his son for putting smiles on the faces of people in the community and beckoned on the people to ensure effective utilization of the tools which they received to advance their livelihood.

One of the beneficiaries who specialized in aluminum construction, Mr. Chinonso Eke, on behalf of others, said the founder had set them up for life and prayed God to bless him in abundance.

Fides gathered that the celebration which featured dance performances of the parish’s CYON was held in the absence of the celebrant.