The College of Nursing Sciences, St. Joseph’s Hospital, Adazi-Nukwu, Anaocha LGA, Anambra State, has commenced the post basic Nursing Programme and will offer only 20 slots to most qualified students that meet the guidelines set out by the Nursing and Midwifery Council of Nigeria.

The Provost of the College, Mrs. Francisca Atakulu, made the disclosure at the 2021 Joint Matriculation and Capping Ceremony of the year one Nursing and Midwifery Students held on December 17. She explained that the College started the programme based on the result of the last accreditation exercise.

She disclosed that the College had been granted full accreditation with the yearly intake capacity for Basic Midwifery increasing from 60 to 100 and that of Basic Nursing from 50 to 75.

She congratulated the students who made it for the Post-Basic Nursing Programme and urged them to reciprocate their parents/guardians efforts to ensure that they received quality education, saying that they had succeeded in taking them to another level in their educational pursuit.

She maintained that students could reciprocate their parents’ efforts by attending lectures regularly, carrying all assigned tasks, shunning deviant

behaviour and obeying the school’s rules and regulations.

She described nursing as a unique profession built on the tenets of respect, discipline and modesty and charged them to bear in mind that there was a synergy between hard work and Godliness as no sweet was without sweat.

The Provost revealed that the College Management had put up the e-library to enable them to access material from any part of the world and enjoined them to take advantage of human and physical facilities to improve and equip themselves towards academic excellence. 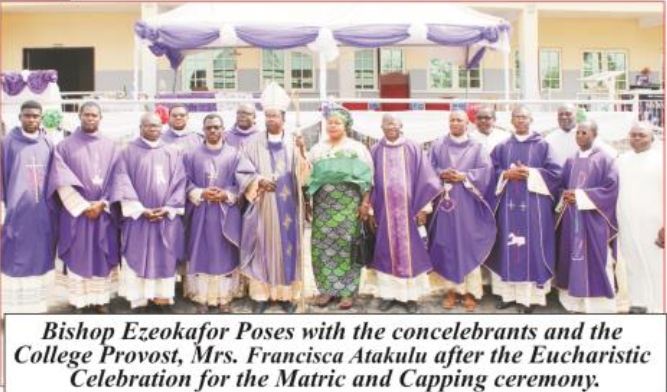 Contributing, the Administrator of the College of Nursing Sciences, Rev. Fr. Jude Igboka, explained that the capping ceremony marked the survival of a series of screening exercise and the beginning of the journey of successful students into the noble profession.

He said that the essence of the various screening exercise was to fish out those who had brains to study nursing, saying that not everyone with passion could study the course. He urged the successful students to read and work hard to meet up with the academic demands that came with the profession to avoid demotion which, he said, would lead to the termination of one’s admission.

He said that Management had been working as a team to ensure that students received the best training sequel to the qualified tutors and comfortable environment that had been put in place for the students to excel.

commended the efforts of the College Management for securing accreditation for the Institute. 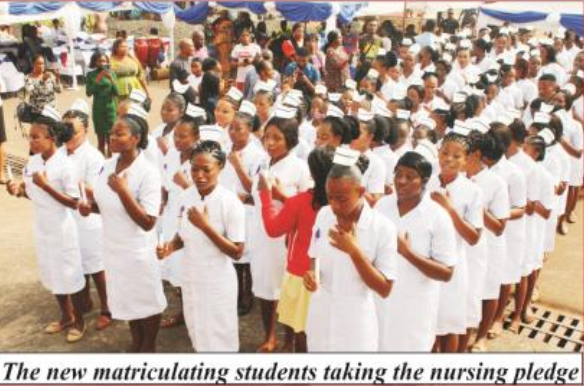 The duo, represented by the Deputy Director of Nursing Services, Mrs. Stella Ekwozo, maintained that the training of nurses should be holistic as the profession involved human lives, calling on the new students to be committed.

The capping and matriculation ceremony commenced with a Eucharistic celebration led by the Catholic Bishop of Awka Diocese, Most Rev. Paulinus Ezeokafor.

Performing the capping of 106 matriculating students, Bishop Ezeokafor, said that the students were blessed to be in the College as not all applicants were admitted.

He described the nursing profession as a very sensitive one, as it dealt with human health; even as he beckoned on them to learn the proper practice required in their field of study for them to succeed as competent nurses, saying that anyone trained in the field of nursing could easily employ oneself rather than waiting for white-collar jobs.

He described nursing as a noble profession needed by all persons due to the Medicare service which they offered society, saying that doctors could not offer the services alone thus the need for nurses.

He disclosed that the government had a lot of responsibility to fulfill, especially in providing the students with necessary facilities, as the students on graduation were integrated into society to serve humanity. He commended the administration of Governors Peter Obi and Willie Obiano for their input in the health sector, saying that more needed to be done.