The investiture ceremony which was held at the school auditorium on 29th October, together with the sendoff of the 2020/2021 academic set, witnessed award presentations to students who distinguished themselves academically and in other categories set out by the School Management.

Speaking to Fides, the School Manager, Rev. Fr. Chigozie Jidera, noted that the events held concurrently were designed for the inauguration of the 2021/2022 academic session. 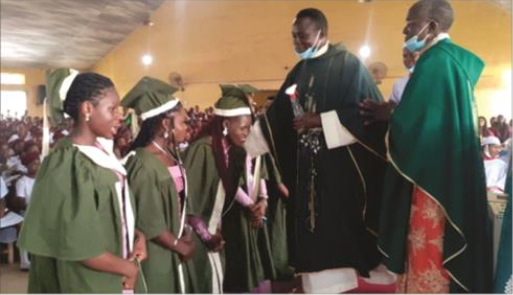 He disclosed that about 650 students were newly invested as students of the institution after excelling in the preliminary test which the School Management had put together to determine the classes were the students were to be placed in.

He congratulated the newly invested students and charged them to uphold the tempo of academic excellence by striving to develop their inherent potentials through the facilities that had been put in place by the School Management. He said it was important for the new students to understand the principles guiding the school and adhere strictly to its rules and regulations.

He disclosed that the School Management had keen interested in the holistic formation of the students, saying that they paid attention to all areas needed to ensure effective and efficient functioning of the girl child.

‘What we do here is a holistic formation as we pay attention to all areas of formation, be it academic, infrastructure or spiritual formation. We carry along all these without neglecting any part.

He said that the Management’s main focus in the new academic session in the area of infrastructure was the completion of the new school hostel for its blessing and subsequent commissioning by the Catholic Bishop of the diocese.

Addressing the graduating students, Fr. Jidera beckoned on them to put into practice what they were taught while in the school, noting that the world out there was very challenging and required strong disciplined persons to pull through. He said that students while in school enjoyed some level of protection, both from the parents and the school environment, noting that a greater sense of maturity was required by the students.

Fr Jidera charged them to maintain high hopes and trust in God, saying that without putting God first in their affairs, they were bound to fail. He said that virtues of diligence which they were inculcated with while in school should be sustained and urged them to work hard in wherever they found themselves in order to make it.

Also speaking, one of the graduating students, Uchechukwu Ndife, appreciated the School Management and teachers for the holistic formation which they received in the school and promised to uphold the legacy which the school had been known for.

Earlier in his homily, anchored on discipline, hard work and Jesus centeredness Msgr. Sylvester Mgbemfulu asked the graduating students to be ready to face new challenges which the larger world would throw on them and advised them to put in use what they had been taught while in school.

He charged the new students to utilize what had been provided for them by the School Management and prepare for life which was the cardinal focus why they were sent to school for them to be found worthy in character and in learning.