Last Tuesday marked the end of what had been proclaimed a five-day sit at home in the Southeast Zone of the country by Simon Ekpa, a renegade Igbo son and leader of a factional group of the Indigenous People of Biafra, IPOB.

Fortunately, however, the directive by Ekpa was not paid heed to by a vast majority of people resident in the Southeast as they went about their legitimate businesses.

Unfortunately though, some people lost their lives in parts of the zone, including a pregnant woman who was hit by a stray bullet in Enugu during an exchange of fire between hoodlums trying to enforce the sit at home order and the police.

But the fact that the people of the zone defied the directive by Ekpa was seen as a great victory and an indication that the end of what is truly a nonsensical directive is coming to an end.

Ekpa is an Ebonyi State indigene that lives in Finland, and who enjoys a Finnish citizenship. From his base in Finland he dishes out murderous orders/directives to his obviously gullible followers in Nigeria who do not baulk at carrying out any directive he gives them, including taking lives.

Now, Ekpa has charged his goons to graduate to ensuring that no election takes place in the Southeast, just as he has directed them to start removing all posters and billboards of politicians. The implications of this are that the elections in the Southeast Zone may be jeopardized if Ekpa is not brought to book. 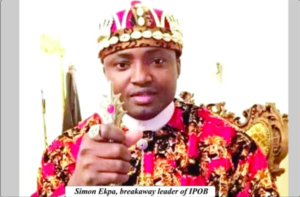 people who can make that happen are the Southeast governors who can apply through the federal government of Nigeria to the Finnish Government for extradition and trial.

But till date, nothing of such has come from any Southeast governor despite the fact that Ekpa’s activities have almost grounded economic, social and now political activities in the zone. Why the Southeast governors have not put pressure on the federal government to extradite Ekpa beats the imagination.

It is clear from what Ekpa has been saying that he is a major threat to the democratic process in Igbo Land and has become a pest that must be removed for sanity to return.

Within the week, the apex Igbo socio-cultural organization, Ohaneze, reportedly commenced the processes of making sure that those responsible for the pandemonium, destruction of public property, killings, and civil unrest in the Southeast will face the consequences of their actions.

According to a newspaper report, Ohaneze said that Ndigbo had identified Simon Ekpa as the overseas provocateur and instigator for the current killings in Imo State, the destruction of public property in Enugu State and disturbance of public peace and sporadic shootings in Ebonyi State.

The same report said that Ndigbo would liaise with relevant organizations, Finnish Embassy in Nigeria, and Nigerians in diaspora to seek ways of bringing back Ekpa to Nigeria to face prosecution and trials over the mayhem in the Southeast Zone.

‘Ndigbo call for the immediate arrest, and repatriation of Simon Ekpa to Nigeria. He’s a treacherous man and criminal hiding behind Finnish citizenship and Biafra agitation to wreak havoc, extort monies from Nigerians abroad, and influence the insecurity challenges against Ndigbo,’ the report read.

We commend the Ohaneze for taking this initiative of bringing the renegade called Ekpa to justice. But we believe that the process will be quickened and be more effective if the Southeast governors under the auspices of the Southeast Governors Forum take up the gauntlet.

It is most absurd that a legitimate option of bringing Ekpa to book exists but not being explored and exploited. It is even an embarrassment that our governors are making no concrete efforts to identify and quash the major source of insecurity in their zone.

Any further delay in doing the right thing may just send the wrong signals and lead to all manner of dangerous speculations. We demand that our governors wake up to their major responsibility of securing the lives of their citizens and decisively deal with this renegade.