If anyone  ever wondered how Professor Chukwuma Soludo would drive his conviction for his envisioned Anambra State or the veracity of his avowals to clinically pursue his pact with ndi-Anambra, which is very well captured in The Soludo Solution: A People’s Manifesto for a Greater Anambra (a document he presented to the people of Anambra – largely upon which they gave him the mandate to govern); the size and quality of his Transition Committee, their terms of reference and other things he has begun to say and do as he readies to assume office,

would provide some guide to his dictum of functional disruptive intervention in governance. This ‘disruptive’ signal sounds strange in a sociopolitical environment like ours where cheap copy propensity has progressively vitiated the creative ingenuity of a people imbued with near limitless regenerative energies for modeling and updating the modes of civilization agreeable with the possibilities available to every perceptive age. 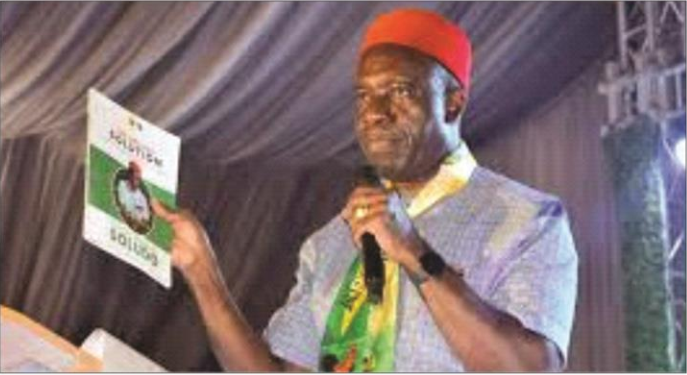 If Soludo’s treatise concerning governance of his envisioned Anambra State failed to cause eruptions at discourses on his impending administration, the essence would have been dead on arrival. But, no; the depths of discussions in sociopolitical circles for and against the Governor-elect’s posture are positive signs that the people are consciously interrogating the disruptive intervention order canvassed.

Not a few people are rattled about the notable emphases on ‘disruptive’ and ‘disruption’ in the register of the incoming administration. But any reform that is capable of effecting systemic change is bound to be disruptive. Revolutionary changes in any polity are characterized by disruptions that allow radical alternatives to systemic overhaul en route a new order: Soludo’s ‘disruptive intervention’ simply tales of deviation from the old order of doing things which has proved to hinder development.

With an Oby Ezekwesili led Transition Committee of 80 persons of proven intellectual, professional and ethical ingenuity in public service, whose membership solely derives from their track records of efficiency in their various fields, other than hinge on partisan affiliations or claim of Anambra origin, the Governor-elect is not hesitant in pointing at where he is headed: hardcore result-oriented decisions and policies towards making Anambra State “a homeland that is the preferred destination in which to live, invest, learn, work, relax and enjoy”.

Soludo in seeking the Transition Committee’s contributions towards this mission, advised them to reach out to whoever else they considered invaluable in their assignment.

As arguments ensued for and against the “large size” and composition of Soludo’s Transition Committee, I asked, “Is there any standard number for such committee certified by any recognised statute which the Governor-elect fouled; or has he contravened any recognisable noble precept regarding the geo-partisan spread of the Committee’s membership?” Beside the often grumbly “It is not done!” from a few, I am yet to receive any well considered affirmation on why Soludo’s preferences here should unnerve any dispassionate critic of his.

But why would people expect Professor Chukwuma Soludo to confine himself to conjectures and practices whose efficacy rating is hazy and doubtful at best? Why must he succumb to the caprices of failed notions and observances just because such impressions or acts are assumed to be conventional, even when their embrace promises an endless entrapment in a vicious rigmarole in odious mediocrity? Of what use would Soludo’s globally professed ingenuity in grooming economies across the world be if he fails to deploy his deeply creative acumen in organised economies and his internationally acclaimed administrative expertise in governance of Anambra State?

Would Soludo conquer the world with his prowess in the workings of micro and macro economies only to fall for distractions (however intractable) that deviously threaten a prime opportunity to present a model home-state economy as the Governor of Anambra State?  Such crucial interrogations, free Soludo from the wry stranglehold of deliberate naysayers who, though believing his regenerative impulses, would rather choose to obscure them by leading negative campaigns for dysfunctional political reasons. Good enough, the discussions rather than worry ndi-Anambra, heighten their great expectations of the premium benefits that Soludo’s headship of the state affairs promises.

The Anambra Governor-elect leaves no one in doubt of his determination to jealously shepherd the economy of his state. He has expressed willingness to collaborate with the South East Geopolitical Bloc and other states contiguous to Anambra.

He insists on Innoson Motors manufactured at Nnewi (Anambra State) as the preferred brand of vehicles his administration will patronise, just as he has settled for locally made fabrics like the Akwaete as his choice clothing materials. Soludo’s option for home items authenticates his assurances that they will bear the standard that will afford them global recognition and acceptance. The manufacturers in Anambra and the people are excited in anticipation of a jolt of Anambra’s economy into global reckoning.

Soludo has repeatedly talked of work, work and more work for himself and anyone making his team. He would spare no time for ceremonies and unproductive engagements. This promises a huge cut in the cost of sundry sociopolitical engagements that governments often undertake.

He advocates lean cost of running government as a way of conserving scarce resources for a developmental economy. Not willing to adduce alibis for failure of his aides, he insists on result-oriented work-hands (from wherever) who will suitably ally with his strategy for attaining his envisioned state.

Soludo is sworn to adhering to standard practices and designs that will ensure he makes no excuses for avoidable administrative hiccups. If you think the interruption Soludo canvasses is farfetched, the ingredients are domiciled in his sterling globalised experiences and his iron-cast readiness and resolve to restructure the system for sustainable growth.

His capacity to achieve this, informs the overwhelming support he enjoys from Governor Willie Obiano who has persistently boasted that ‘Soludo will outperform any known governor in state administration’. Ndi-Anambra are anxiously waiting for ‘The Soludo Solution’, come 17 March, 2022, when Professor Chukwuma Soludo’s administration will be inaugurated. God help ndi-Anambra.