Anambra State in the past seven months of Professor Chukwuma Soludo’s watch has witnessed measures of tugging between his government and various sects in organised crime, including some sub-sects in the informal sector, whose operations diminished the quality of life of the people and the states revenue receipts.

The governors devout insistence on strategic engagements bordering on the primacy of life, governments revenue yields and systemic sanity are fundamentally responsible for the sustained tussle. He would not tolerate parallel structures that undermine the states economy and challenge the authority of the government to protect the people and ensure a sane polity.

He takes no prisoners! But such distracting windows like brazen kidnapping for ransom (some for heightened savage lures), ruthless touting, cultic gangsterism, park and market fiefdoms shenaniganry were Soludo Administrations abhorrent inheritances. They would not cheaply give in to a new order. Yet, only systemic change would soothe Soludos agitated mood.

But change is a phenomenon that is often met with some reservations. It attracts anxiety, suspicion or even outright resistance when inclined to impetuous disruptions such as Governor Chukwuma Soludos sworn precept of disruptive change in the governance of Anambra State . 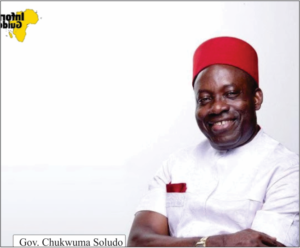 Since Professor Soludo began campaigns for the office of Anambra State governor till date, he has maintained an uncompromising eagerness to turn things around in the singular pursuit of making Anambra State a prosperous, livable and pleasurable habitation for Ndi-Anambra and other persons who opt for the state desirous of the accruable deliverables there from.

As the governor of Anambra State these past seven months, Solud’o cuts the impression of a leader in a hurry to make things veer to his predetermined conclusions in direction and urgency.

Since the system would not freely yield to his compulsions, the ongoing struggles, test the audacity of the governor to impress his authority and convictions on the Anambra political ecosystem.

Those who gave Governor Soludo no chance of any success (and they were many) in his fierce charge against kidnappers and other harbingers of death, who earlier held sway in the state, now join other Anambra residents in celebrating the assured boost in the peoples sense of freedom and safety.

Every passing day furthers the governors superior power. While the governors profile is unarguably on ascent on this count, the worrisome incidence of touting has continued to gnaw at the image of the government as the legitimate authority to protect its citizens and maintain law and order in public places.

Evidently, whatever the State Government might be doing to rein in the unwieldy menace of touts in parks, markets and everywhere in Anambra is yet to translate to the envisaged result. Touts still loom large all across the state harassing transporters and commuters, and embarrassing the government.

Despite the State Governments recent institution of the Anambra Joint Enforcement Team (ANJET) to ensure compliance with extant laws on modes of revenue collection and ensure the routing of touts in the state, the agency seems to be overwhelmed by the motley nature, size and spread of the miscreants.

The lures of cash transaction and the gentle (if not cowardly) mien of victims of touting, in addition to inadequate number of ANJET enforcers, are chiefly responsible for the touts’ repudiation of government order prohibiting their operations. Their extortionate acts are implicated in the reservations transporters have in coming to terms with government on tax matters.

The transporters insist on government protection from touts as precondition for their compliance with their tax obligations; hence the back and forth subtle overhangs in the tripartite struggle among the government, transporters and touts, while ANJET tasks its elasticity to meet a tall mandate.

On the other hand, there probably might not be any better and more visible demonstration of the Soludo-led Government’s commitment to the disruptive change” mantra than the corrective activities of the Anambra State Physical Planning Board whose bold interventions in urban regeneration have led to the demolition of many residential, business and church structures wrongly sited at designated drainage paths, unauthorized places or portions of government land in Onitsha, Oba, Nkwelle, Awka, etc.

Soludo scored a bulls eye here by not sparing whosoever contravenes the law. Though the ongoing exercise directly affects the rich and influential members of society who could afford the expensive gamble, the governor’s obvious preferences for sanity, the rule of law and urbanity would allow him no compromises as government bulldozers continue to wade into marked premises reclaiming public/government lands.

It is a win some, lose some situation in the state government’s “red eye” revenue scheme. Understandably, the success of any government largely depends on the fiscal resources available to it. Given Soludo’s determination to set the template for good governance in this clime, it is not surprising that with the austere state treasury upon poor receipts from the Federation Account, he would need improved internally generated revenue to fund his envisioned Anambra Project.

This necessity however exposes the government to some revenue belts that deeply hurt the sensibilities of everyday Anambra people; particularly those in the extremities of the state who would not understand why they should pay taxes for burial posters of their loved ones, their homes and sundry assets for instance. This detestable innovative tax drive is a threat to the abundant goodwill the Soludo’s Administration enjoys yet. One wonders how far this drive would go.

For a four year term, it would be too early in the day to reach conclusions on Soludos success or failure in impressing his gospel of “disruptive change” and the attendant gains or losses; but it would not be out of place to observe a hasty plunge into the implementation of some essential tax decisions without adequate public enlightenment to drive the process.

The government would have unjustifiably lost so much revenue in the tax moratorium it granted most of those in the unorganised private sector since the erstwhile tax collectors did not allow the people any respite. It was free money for the tax fellows. Considering the existential essence of revenue collection to the government, one wonders why the government failed to invest adequate efforts promoting the new tax regime to an appreciable buy-in from the target tax payers.

All the relevant components of the scheme should have been laid bare and persuasively canvassed in public arenas and diverse media spaces before rolling out the scheme. This would have dutifully spared a good population of Ndi-Anambra  the weight of state might and the ominous tension upon tax matters.

Here the wisdom in Igbo elders’ saying that, “Nkowa putalu, asili naa”  becomes apt. The government does not and cannot claim knowledge of everything. Its openness to functional criticisms buttresses its crucial information base and supports its resolve to serve the people optimally.

So far, Ndi-Anambra have no cause to doubt the benefits of the overwhelming electoral victory they handed Professor Chukwuma Soludo in the 2021 Anambra gubernatorial poll. They are confident in his capacity to live his lofty promises.  Ndi-Anambra eagerly look forward to better days in a prosperous, livable and pleasurable smart megacity homeland in the course of their treasured Soludos administration.