As part of activities marking his first sixth months in office, the Anambra State governor, Prof Charles Soludo, Saturday, 17 September, flagged off the construction and rehabilitation of about 60.34 kilometers of roads across the state.

The event began by flagging off the rehabilitation of the 26-kilometer Awba-Ofemili-Amansea Road, which, he assured, would be completed within a record time of 16 months.

Another road flagged off was the 26.4-kilometer Amansea-Ndiukwuenu-Awa-Ufuma Road which will be completed in four months.

The six hundred meter stretch of Isu/Igbo, Isuofia/Igboukwu section of the Ekwulobia/Nnobi Road, popularly called ‘Isu/Igbo River, was also flagged off alongside the 7.79-kilometer Akpaka to Basilica Road in Onitsha North Council Area.

While the Isu/Igbo Road was given a completion time of four months, it was projected that the Akpaka Road would be completed by May next year. 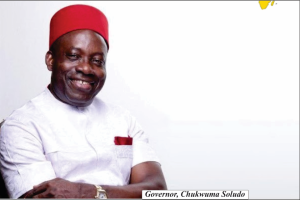 It was gathered by this paper that the Anambra State Government intends to ensure that the roads will last for a minimum of twenty years, in line with a pact the government signed with all the contractors.

This was just as the governor also assured that from Awba-Ofemili, his administration would build a bridge across to Ayamelum, in line with his earlier promise to them.

Worthy of note is the government’s disclosure that the road from Amansea to Awba-Ofemili would be done on dry stone base, hence the length of time it would take.

The government also disclosed that over the next two months many roads would be flagged off, after, according to it, the strategic ones had been commenced. This was after the governor promised to make the state one big construction site.

There’s no doubt that the latest developments in road construction must come as cheering news to not only the people of the areas involved, but to all Anambra people who have had terrible experiences while traversing the state in the last few years. To say that Anambra has some of the worst roads in the country today is to state the very obvious.

We believe that after the security situation which the government of the state has handled well, the next priority should be roads and we are happy that the governor acknowledges this. We are happier still that he has promised to build standard, durable roads for the people of the state.

For committing scarce funds into massive construction of roads at this critical time of the country’s economic down turn, and so soon after his government took off, we wish to really commend Gov Chukwuma Soludo. It shows a governor who knows how to set his priorities right. This can only augur well for the financial health of the state.

As Soludo marks his first six months in office, we commend him for his strides so far, especially after being bogged down by the massive security challenge he met immediately he came on board which some governors would have given as an excuse to start slowly.

We pray that there will be no further break down in security so that meaningful development can be accelerated in the state.