Soludo Wants Church to Help in Fight against Idol Worship

Amid the resurgence of paganism in parts of Anambra State, the Anambra State governor, Prof Chukwuma Soludo, has enjoined the Church to help in combating the phenomenon.

Soludo who expressed concern that worshipping of idols was fast growing in the state, especially among the youth, tasked the Church to confront the development head-on to save the state from being totally taken over by what he described as occultic powers.

Soludo made the call at the dedication of a new church building of the House of Testimony, Life of Faith Gospel Assembly, Federal Housing Estate, Onitsha.

The governor recalled that since the inception of his administration, he had declared war on criminals, their shrines, and priests; as well as burnt down their  shine.

‘They can come with whatever they want to but with the Bible in our right hand, we shall prevail. Anambra is in the hands of God but we must continue to pray, to take back our state from criminals, touts and lawlessness. 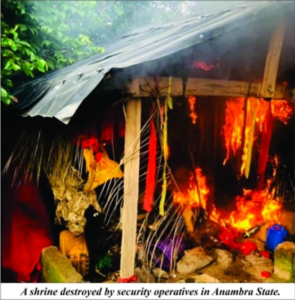 ‘Idolatry is the fastest-growing religion in the state. We must not take it for granted. Pope Francis preaches ecumenism.

I just don’t preach it, I try to live it. If we bond together, we will survive collectively but if we go separately, we will die separately. This land is our own, we must not give up on it,’ Soludo said.

He described Anambra as God’s own state, urging all denominations to unite as one body in Christ Jesus to fight ‘the common criminals’.

Soludo said he had come in solidarity with Christians to fight what he termed the evil of idolatry in the state, noting that for him, it was a joy that every Monday, he enjoyed Pentecostal service.

Speaking on his eight months in office, Soludo disclosed that while many governments usually grappled with setting up their cabinets, his administration could account for what it had achieved every day of the eight months.

In the aspect of insecurity, he admitted that it would not disappear overnight, expressing optimism that steady and surely, his administration would restore peace and tranquility to the land, pointing out that it was already being felt by the people of the state.

‘Our benchmark actually is that in our first 24 months, we will be able to deliver over 230 km of roads. The quality of roads we are delivering has never been seen in the state before. Coincidentally, our Commissioner for Works was selected on the basis of his competence and integrity. He also happens to be a Pentecostal.

I have known him for years but never knew if he was a Christian or not. When I was selecting him, I had no idea of his religion. It was later I discovered he was a Pentecostal.

‘Our main aim is to get people who would deliver – a round peg in a round hole. Let us all be the change that we want to see. Anambra will continue to rise,’ the governor said.