Soludo, So Far So Good

We have watched the actions and body language of Anambra’s new governor, Prof Chukwuma Soludo, ever since he assumed office on 17 March 2022 and we have to say that we are happy with him..

Those early actions are indications of a man who knows what has to be done and how to do them; just as he has shown readiness to work with Anambra’s worthy sons and daughters.

From the membership of his 80-member Transition Committee through the banning of ticket touts at markets and parks, to finding solutions to the Monday sit-at-home strikes, he has shown serious intentions to hit the ground running.. 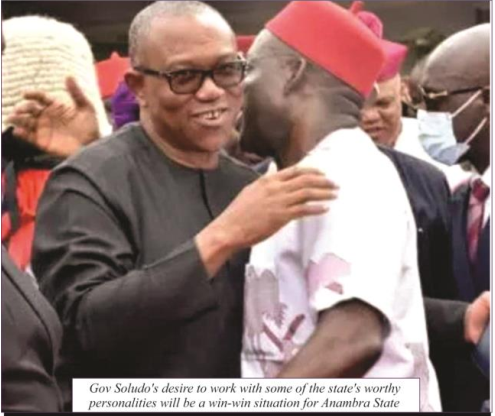 We have also noticed his desire to carry along the state’s worthy sons and daughters despite differences in political allegiance. His invitation to a former governor of the state, Peter Obi, to his inauguration and granting him leave to address Anambra Traditional Rulers and Presidents General of communities at the premises of the Government House on Obi’s presidential ambition, further portray Soludo as a statesman. We urge him to also reach out to other people who have capacity to help his government in one way or another.

The state needs all her best hands at this material time, especially with huge question marks hanging over the state’s finances as revealed recently by Soludo.

As more speculations still trail the actual state of the state’s finances, we urge Soludo to make a state broadcast very soon on what he is inheriting. This will go a long way in eliminating future arguments or controversies as the people of the state deserve to know the true state of affairs concerning the financial situation of their state.

This will also help in lessening or increasing the burden of expectations on the new helmsman from the people of Anambra State.

We are also at this point commending him on the appointment of two journalists in his cabinet. They include Hon Mrs Ify Obinabo and Mr Don Onyenji who both worked for the state-owned radio station. Their appointments show that the governor is not succumbing to political pressure but is guided by his own personal convictions of those he wants to work with.