The Wife of the governor of Anambra State, Mrs. Nonye Soludo, has promised to ensure that the thirteen-year-old girl, who was molested and impregnated by her seventy-five-year-old guardian receives full care and attains her life’s dreams.

Mrs. Soludo, who made the promise when she received the girl and her baby at the Governor’s Lodge, Amawbia, explained that the girl would be given all the support she needed to raise her baby, attain standard education and become a useful asset to her family and Anambra State.

Esther, a primary five pupil, lived with her seventy-five-year-old guardian in Awka. 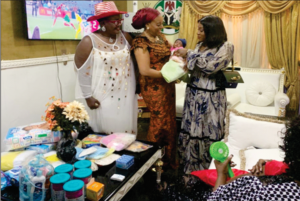 It was during her stay that the septuagenarian, who is now in Police net, began to sexually abuse her, which resulted to pregnancy.

Her story went viral on social media, attracting the attention of the Governor’s wife and the Anambra State Ministry of Women and Social Welfare, both of whom, collaborated for immediate action.

In her chat with the girl, Mrs. Soludo accompanied by the Commissioner for Women’s Affairs

and Social Welfare, Mrs. Ify Obinabo, assured her that she would get all the support she needed to succeed, and also assured that she would always be in touch to ensure that her baby is well taken care of.

The Governor’s Wife, who commended the Ministry of Women and Social Welfare, for being proactive on the case, re-emphasized that Anambra State is a red zone for abusers, as her husband’s administration will not blink an eye in punishing offenders.

Mrs. Soludo also urged those, who were going through any form of abuse to speak out, as the government was always ready to respond.

She also provided cash and nursing materials for the upkeep of the girl and her baby.

Esther is already registered to continue her education when the next term of the academic session begins in January.