Soludo, Obi: No Need for This

Within the week the social and traditional media were awash with the altercation between the governor of Anambra State, Prof Chukwuma Soludo, and a former governor of the state and currently the presidential candidate of Labour Party, Mr Peter Obi, over the former’s comments on Obi concerning Obi’s presidential ambition.

The summary of the comments by Soludo was that Obi could not and would not actualize his presidential ambition because of a variety of factors put forward by Soludo. Soludo’s comments were triggered by negative reactions that trailed his earlier comments on Obi and his savings for Anambra while as governor. Soludo had dismissed Obi’s savings as next to nothing; a statement that drew the ire of Obi’s supporters nationwide, known as Obidients.

While it is not our intention to delve into the reason for Soludo’s salvo, we nevertheless view what happened as unfortunate, being that any altercation between two of the state’s very illustrious sons will not augur well for the development of the state. Both Obi and Soludo are giants in their own rights; locally, nationally and internationally, and one can only imagine what the state stands to gain by both personalities working harmoniously for the good of the state.

But what emerged within the week concerning the relations between the two men has left much to be desired. It is something capable of tearing the fabric of the state, given that both gentlemen command large followership. Also coming during the thick of electioneering makes it not only bad but dangerous for the health of the state. 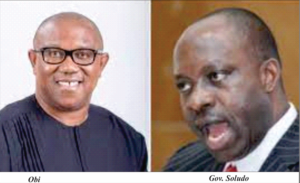 Yes, in a democracy, anyone is free to hold their views on anything but we believe it should be done in a way not to hurt or infringe on the rights of others. That is maturity. Maturity also comes into play the way one reacts to perceived insults.

While the mature mind takes such in their stride, the immature engages in fisticuffs. We do not think that a lot of maturity has been displayed by one of the parties simply because of the actions of those referred to as the mob. We feel the best thing should have been to ignore them like many people have been doing over cyber space attacks or trolls.

The two gentlemen involved have been friends over the years and something as inconsequential as social media trolls should not have been allowed to cause a rift between them, no matter what. The whole matter does not bode well for the state, especially when politics without bitterness should be the watchword.

We therefore call on well meaning people in the state to intervene and ensure that this matter does not escalate any further. This is an avoidable mess that should not have been let out in the first place. Anambra must move on without such distractions.